What is a client?

If I run a game with 2 players then do a print string on event play in any class at least one print string will say client #.

What is a client how do I access it?

I recommend you to read this:

An overview of the role of the server in multiplayer.

I also recommend you to watch this youtube playlist from the Unreal Engine channel. At least the first video 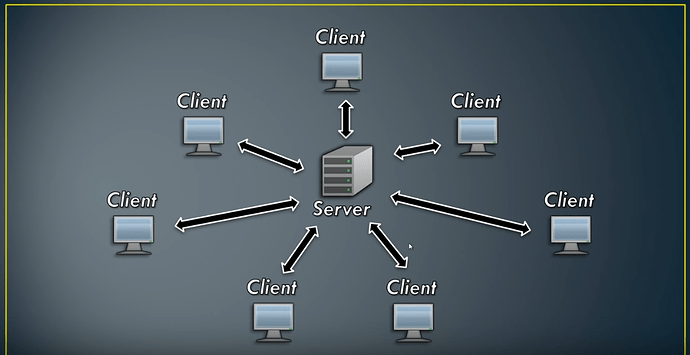 Seen tutorial playlist, several times. Not as helpful as I would like cause it doesn’t go step by step for every single part, from the creation of assets to e.c.t. If it did I could see what I might have different. I want to say the definition of a client is- player controller. But run into several issues when trying to access a player controller.

For example, should “event construct> print string” in a widget class run only on clients or also the server? I “event beginplay>create widget>add to viewport” on my level blueprint. I have multiplayer options - “number of players” set to 4. I have dedicated server unchecked so one window is the listen server. Why is viewport printing for: the server, client 1, client 2, client 3. I thought only client 1, client 2, and client 3 would appear on viewport as a result of print string in the widget. Not server. Furthermore, I thought each client would see only 1 print on the viewport, not 4. What networking concept do I have confused if the client is a player controller?

Can we limit answers to straight answers instead of links to documentation. In case anyone wants to mention this, I’ve seen it. http://cedric.bnslv.de/unreal-engine-4-network-compendium-released/

Post the list of “sound stupid” and “easy” questions here what you have regarding unreal engine 4 blueprint networking, everything you don’t understand from basics, i would answer it.

Your example, you can construct widget only on player local client, server has local player playing, you constructing the widget for this player, it appears on screen, server not aware about other 3 building on each client locally.

Wow you ask an incredibly ambiguous question then bash on me for not answering to your taste. And then you post your real question with the real context of your problem. Good luck with your problem mate.

A client is literally a computer, not a class. It is represented by certain classes.

Not bashing nor was that the real context. Just a proper response to your answer. But yes the answer was not a real answer.

@CriErr some how i feel related to you because you’re as confused as i am so if you’ve found a way to understand this better … Tell me. Btw (if you already solved your problem ) why is the viewport on unreal is the server and why does the server has to be running a client instance at the same time??