What do these icons mean?

While learning how to utilize and debug Behavior Trees and general AI concepts in UE4, I noticed that characters with custom AI Controllers have icons above their heads (see below for examples of this). So far, between my own experiments and tutorial videos, I’ve noticed at least 2 different icons. My question is simply, how many are there and what do they represent? Is there any documentation about this? 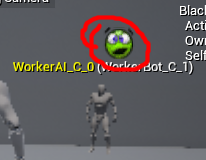 If it has a brain / AI logic set up and that logic is currently doing something, then its green.

If its missing a brain / AI logic is not set up or that logic is currently doing nothing, then its red.

Those are the only two icons.

Until an official staff member says otherwise, I’ll take your word for it. Thanks!

Allar is pretty skilled. You can believe his words. I will mark this answer as valid (: