In project i’m working on I need some dynamic terrain.
I whipped up some code for fully procedural terrain but I’ve hit a bit of a problem.
Once I pop a tessellated material on my terrain mesh I get some funky results. 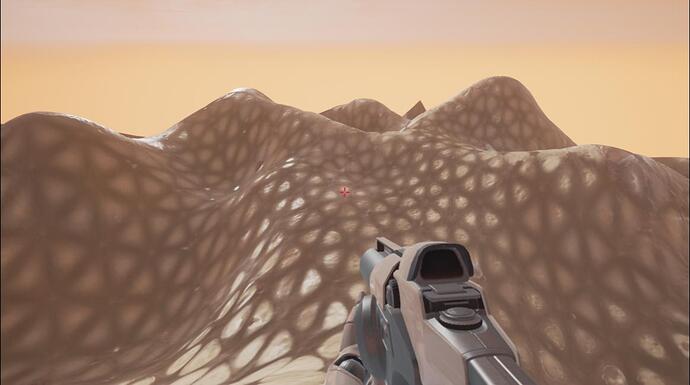 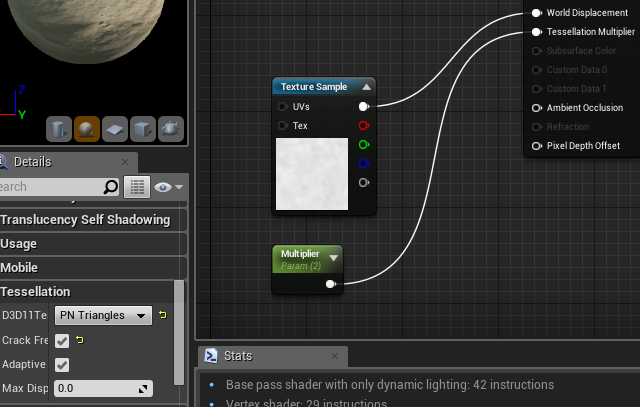 The mesh is fully UV’ed but it looks like the tessellation somehow doesn’t respect that? I don’t know. Help me please

I don’t know much about tessellation but you might want to describe your problem in more detail. It’s not immediately obvious what’s wrong, at least to me.

I have created a procedural mesh, the terrain, and added a sand material. Inside the sand material I tessellate the terrain and that’s what’s creating those weird lines and shader bugs that you see on the screenshot. It is supposed to be plain sand texture.

Hello Ryan, thanks for answering, I am using a coordinate list from an OBJ that i created in max and i’m parsing it and passing it to a grid mesh component:

This is what i’m doing to calculate UV’s although I don’t think that affects tessellation right?

The shader error also shows up in unlit mode. if it’s any help.

Here’s a quick video. (the blue circle is a decal as i’m making a sculptable terrain)

The material works fine on the same mesh when it is static.

ok you said in your first post that this was code… but this actually blueprint not any code.

It is most likely that procedural mesh was never tested properly with tessellation. I will create a Jira for somebody in QA to try and repro it.

My bad, thanks for passing it on!

I didn’t realize it was supposed to be sand. I thought the weird grid thing was intentional because it’s kind of cool looking.

Funny thing, I actually found the same problem just a couple days ago when trying to use tessellation on CustomMeshComponent mesh. So +1 to interest. I was suspecting that the reason for it is because vertices are not reused in the generated mesh, but didn’t get to actually check it out.

@RyanB Is there any update on this? I would love to be able to do this.

No, there is still a JIRA but it has not been scheduled yet. I would not expect it to be fixed within the next release or two.