Does anyone know why this is happening?? I wasn’t able to see this in my viewport, but only during rendering. I was only able to replicate one of these light leaks in the viewport at a specific xyz coordinates. 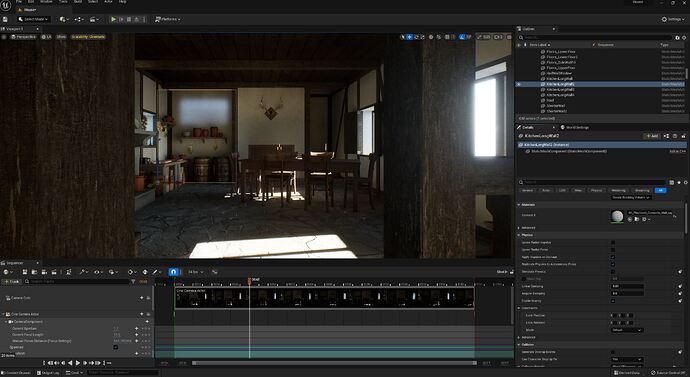 that scene looks quite nice but a bit dark

those leaks may be because the space between the wall pieces will reveal the outside background light.

This will happen because the polygons are stretched too much and the engine will not manage to calculate the inside/outside visibility.

try adding some black polygons behind the position where the walls meet.

I also I would try finding some tutorials on how to create unreal interiors. You may have missed some important steps in setting up the scene

If you are using Lumen, walls should be no thinner than 10 centimeters to avoid light leaking - just an idea what could possibly cause the problem… Not sure, if this could explain why it is only visible during rendering.

Thanks for replying, I have made sure the walls were thick as I have encountered the thin wall issue before. Also did try making the wall extremely fat, and as well as placing a black card behind the wall. All yield same results.

there are no gaps between the walls doesn’t mean you will not have that issue.

think about aliasing problem. the jagged edges appear because there is a finite number of points/pixels on a line that the GPU can calculate. You can’t have a perfect straight line when rotating that line at a angle. this is reduced/masked by the anti-aliasing option.

lets say you have two walls. each have two polygons. so they share one edge. left and right edge.

when the engine render a frame those polygons are stretched, rotated. When calculating each one of those edges, due to computer math precision, and other stuff like that, those polygons will not have same position anymore.

In fact, it appears there is a drift that is periodically reduced by the engine. The flicker you get. It gets worse then the engine catches up

Help the engine by either having a full wall, one single room object or by adding a background object behind to cut the light from the background. Or you can use a dark color as the sky.

Actually I think unreal have some tools to group of separate meshes together so they are calculated at the same time like a single object. I think it was mentioned in some tutorial I’ve watched.

I have tried what you suggested. I have grouped the layout of the interior using the merge tool(I believe that is what you are referring too), and added a black wall behind the issue. Both did not fix the issue.

I have tried placing a black wall above the layout and it did help a bit, but not completely. The only way to block out the light is to place the black wall just above the light leak. But I believe the light leak travels the entirety of the wall, just that the camera did not pick up the bottom half of the light leak due to its position, so not a viable fix. I honestly do not know what else to try since other solutions alters the look I was going for.

well i have no more solutions.

Do you tried to change parameter in PostProcessVolume? such as change GI.To find out whether it is a lumen or a model problem

I have tried that as well. Would have loved to try raytraced, I imagined that could have possibly fixed my issue but I use an AMD card. So it’s almost always on lumen.