Im currently in the early stages or learning UE4 and really want to develop a Virtual Reality experience. Ive got down the basics and can successfully create a character pawn with head tracking and hands. However i cannot for the life of me get any degree of movement to work at all. (other than on the spot tracking of course).

Ive basically copied the Fps BP movement and it all looks as if it should work. All inputs are mapped and all Actors are set to moveable. I’ve made a VR game mode template which ive mapped in world settings aswell as my VR pawn. If anyone can help a complete noob figure out how to run around in VR that would be amazing.

I hope to one day get an Onward style movement because it works so beautifully. 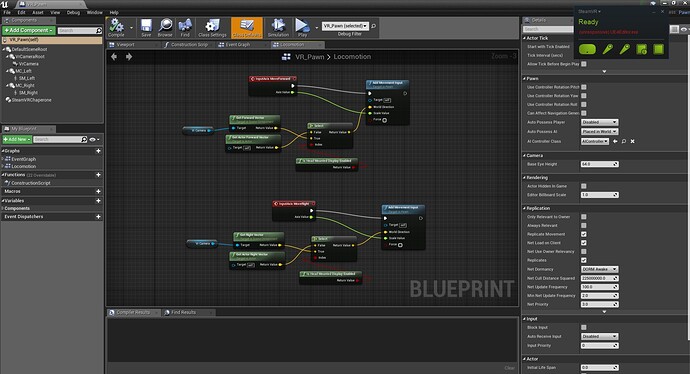 Ok, here is something you need to know. Any movement which uses Add Movement Input functions requires a Movement Component as part of your Pawn.

The Pawn which you have based yours on doesn’t have a movement component and therefore will not react to any Add Movement Input. It will react however to functions like SetActorLocation or AddActorWorldOffset.

Another alternative is to base your pawn on the Character class. Character has a very advanced movement component which is specifically designed for bipeds/humans. It doesn’t matter that you are in VR and your character doesn’t have a “body” it will work anyway.

With that movement component present, it will react to Add Movement Input and you will be able to move around as expected.

Hope this helps! Keep experimenting, it is the best way to learn.

Thankyou so much!, i added a floating movement component and changed the perimeters to make it walk instead of fly. I will now try the character pawn instead and keep on testing!