Hello Folks,
its some weeks ago now i released my final school project (where I learned how to do 3d models, textures, animations, etc.) at ModDB.
I started working on this, when i got the first released ue4 version. some stuff was really hard, some less hard, cause EPIC and the Community is awesome and i had some UDK experince.
The whole project was made in ca. 5 Months. Its not perfect I know, but I did the 95% of the stuff all alone. First off all I’m gonna show you a Video. You also can download with an .exe inside.
But only exported for win 64.

There is no really game target, you not able to win or lose. however you’re able to move around and “play” the DJ :D. Start the Scene, go to the Laptop, play some Music and have fun.
The Scene takes place in a real NightClub in Hamburg, Germany. I made it at my best 1:1 in the 5 months, i need to learn unreal 4 and create everthing.
At the Moment i stopped working on it, but next Week i got a Date for get Pictures and Messaurments to complete the hole Club. Its only the first floor of the Real Waagenbau.
But my focus isn’t on that project at the moment, cause i wanna learn more about ue4

i hope i come back one day to this.

what i would love to add at the moment is: 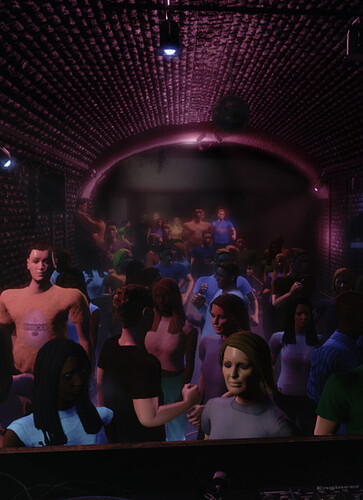 Hello Guys, this is my final school project. its kind of a DJ-Simulator. This is not really a real game. There is no way to win or lose. Its only a 3D Scene, where you are able to play Music. Atm it's not possible to add own Music. I hope this...

Looks good.
Waagenbau looks somewhat similar to the Matrix of Bochum (in Characteristics). The Matrix is located in an old Brewerybuilding, which hase similar stone walls and ceilings.

Has that real club feel!