Hi, i’m new to Unreal, i’m not sure if this goes here but anyways, I was trying to make a terrain and then, after sculpting it a while, the viewport turned black when rotating.

What I’ve done wrong and how can i fix it? I tried to rebuild lighting but nothing changed. 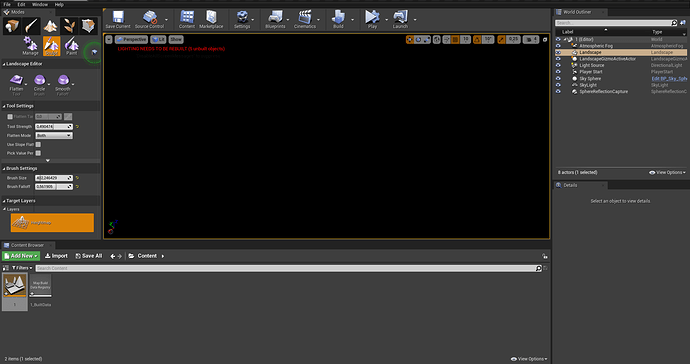 I had a similar issue with a smaller, basic scene. After I put textures on a simple room, and added a floor under it, the room and floor would go black while rotating the camera view or zooming in too close. If it’s the same thing, then the landscape is covering the screen and causing the change to black. It’s probably similar, but not the same. It had to do with the amount of screen space the actors were taking up, and a setting that I forget which it is. Try looking up ‘screen space culling’ or ‘black due to screen space’ or something along those lines.