Updating Cloud Opacity via Blueprint doesn't have any effect

I have the basic BP_Sky_Sphere and I want to update the Cloud Opacity setting over time. If I set the opacity to 0.0 the clouds are gone. If I set it to 1.0, the clouds are visible. I built a blueprint that changes the value of Cloud Opacity using a Timeline in the level blueprint. When I debug the game, I can see the Cloud Opacity on the BP_Sky_Sphere object change from 0.0 to 1.0 slowly over time (the Sun Height also changes over time). However, the clouds don’t change on screen (they are rendered using the default value, not the current value), but the sun height / rotation does change. Is this a bug with cloud opacity not being a property that can be modified in real-time or am I doing something wrong. I thought maybe there was an Update Cloud Opacity node kind of like the Update Sun Direction node, but I don’t see it anywhere. Here is my blueprint: 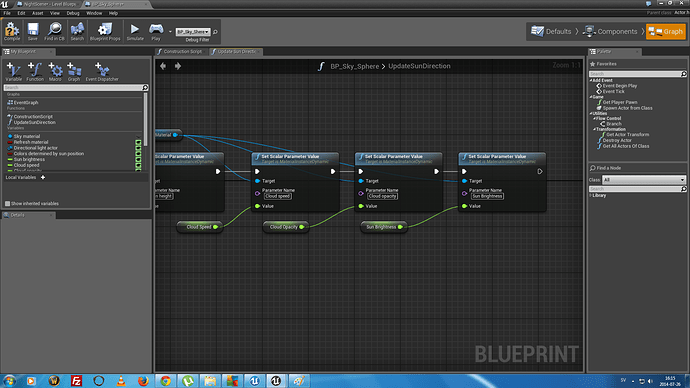 You’ll need to make your Cloud Opacity update in your UpdateSunDirection blueprint.

or just do this from anywhere: