In my game there are many blueprints that simulate physics. I build some constructions out of those blueprints. They usually behave quite stable-the bodies don’t fall over weirdly.

But now I came up with an idea to add a special animation-I want all the blueprints to move out of the level, so i have room to perform some actions, and when I’m done, I’d like the blueprints to return to exact same configuration. So basically what I do is:

The problem is that after the blueprints return, the physics for them seems broken: 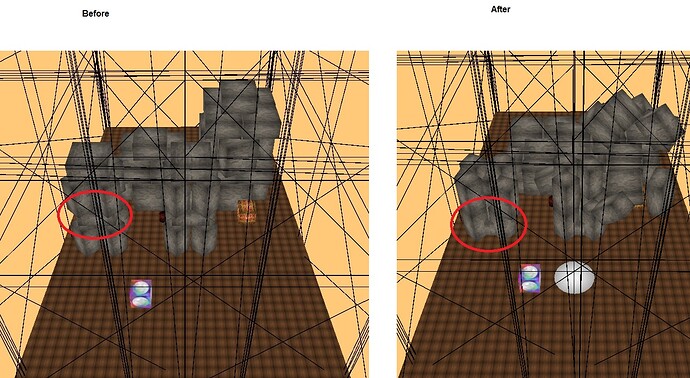 I circled one brick to show the exact problem-the bricks don’t collide with each other. That brick just fell through the pillars.

Note: when I skip the interpolation steps(so basically, I don’t modify the location) everything seems fine after turning simulation back on.
I tried reawakening the bodies or putting them to sleep, but it didn’t work. I also tried setting linear/angular velocities to (0,0,0), but didn’t help either.

What’s the reason of that weird behavior, how to solve the problem? Is that a bug?

It’s been a week and there’s no response. Doesn’t anyone know any possible reason of that issue?

okay, that still happens in 4.6, can I receive any help with that?