Unreal Volumetric Lightmaps - How to properly use them? 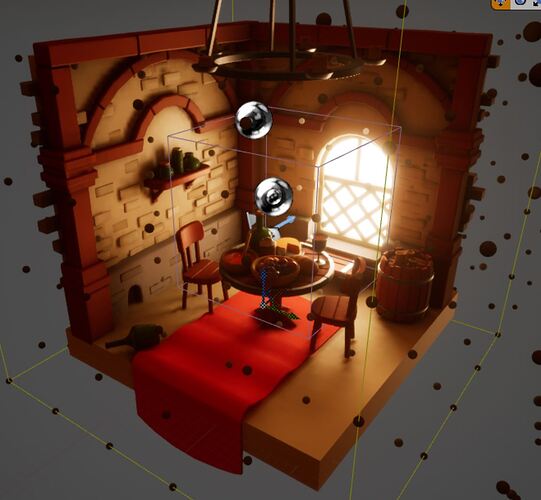 hey, i have this scene and tried volumetric lightmaps. However the default density was really low despite it being a small scene and I also notice that the density around static meshes is not greater (as it should be according to the documentation). Any idea how to work with it? The current result in the screenshot is me cranking the cell size down by almost 100. However even then, there is no greater density around static meshes. Any idea?

A density of 100 means there will be a probe placed every 100 centimeters (1 meter). Frankly the description of how volumetric lightmap density works is badly described by the documentation. 100 (in your case) is essentially the minimum distance, further from static meshes the probes will only get more sparse, never more dense.

The volumetric lightmap is only used by moveable objects and volumetric fog (and static meshes that you have set to force volumetric). In general it doesn’t need to be very dense except to resolve light bleeding through walls (and even in that case, your best option is typically to make thicker walls)

Your scene looks like it is completely static, in which case there’s no point worrying about this.

hey, thanks for the help. Though, I am confused why the doc behaviour looks so different and so much more optimized. See here: 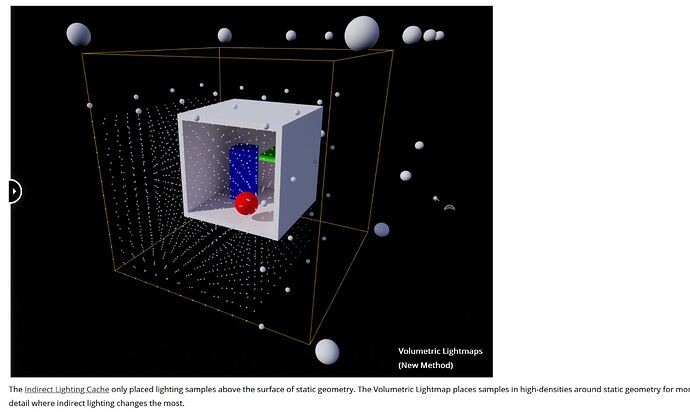 Random wild guess.
Try setting the base distance to 1 and checking.

At a base distance of 100 its essentially impossible for it to look like the sample.

However the sample is likely a 1m engine cube inside a 10m volume.
The subsequent room thing is likely to be a 100m^3 area.

Would definitely help if they bothered to include some kind of scale of sorts.