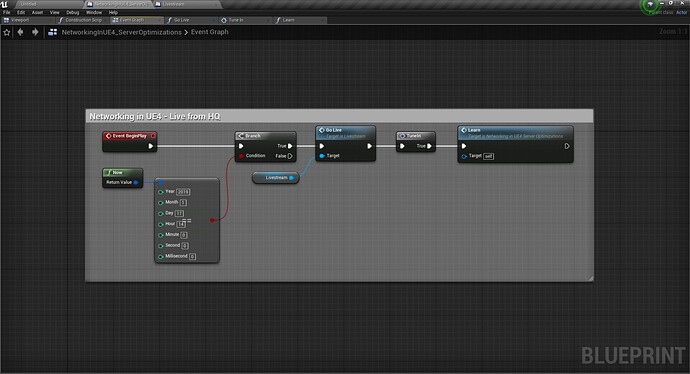 WHAT
Join us for our weekly Unreal Engine livestream. This week we’ll be joined by Ryan Gerleve and Dave Ratti to discuss general server optimization in UE4, as well as techniques and solutions to improve your Actors’ performance in a networked environment. In addition to this, they’ll provide insight into the Replication Graph and answer any questions you may have.

Have questions on the topic? Toss them in the comments below and we’ll try to answer them on the livestream!

COMMUNITY SPOTLIGHTS
What Never Was
https://forums.unrealengine.com/community/released-projects/1571402 how do you stream

Your countdown timer is for 2am.

great topic for a stream… so much information one needs for networking in Unreal… looking forward to it !

Also, there are several legacy network relevancy conditions that exist in actors that replication graph still doesn’t support (such as objects the player ‘owns’ always being relevant to them regardless of culling) - will this stuff come back?

I believe what you are looking for is Net Dormancy for the actors that dont need to be updated. This stream covers this technique pretty well!

anyone have any idea where to find this timer value in the engine https://youtu.be/mT8VUVuk-CY?t=4328 ? to change from 32bit float to higher precision?

NetDriver.h - line 385 is probably a good place to start.

Did this video come out before the network PushModel? I’d be curious about tips/suggestions/etc regarding using the push model along side relevancy and dormancy. A lot of the internal engine classes use the pushmodel presumably to avoid the overhead of checking for replication changes.

Also, an unrelated question about dormancy and ForceNetUpdate();

How does dormancy interact with relevancy? Surely actors can’t be completely skipped by the network/replication logic when dormant if there are still moment to moment relevancy changes occuring, such as cull distance.

If not, and if the actor is then dormant, when a client comes into range of a dormant actor, how are they getting accurate state?