I am all about this issue right now. Please help!

So we are screwed unless Unreal Engine people do something???

Since the release of drivers 382.33 on the 22nd of May, several Unreal Engine 4 games have been affected by heavy system crashes that make playing such games impossible.

The issue I’m talking about is this one: Unreal Engine Issues and Bug Tracker (UE-42280)

The problem persists even after the release of the drivers 382.53 on the 9th of June.

r/F13thegame - Unreal engine is exiting due to D3D device being lost? Happens... Unreal Engine is exiting due to D3D device being lost :: TEKKEN 7 General...

Everytime during the chapter 13 cutscene in story mode and while Kazumi transforms in Arcade mode, my game crashes. Any one else with this problem? Tried redownloading the game, updating gfx, downgrading gfx, reducing clock speed, playing on lowest,...

Main problem is. Even if Epic will solve this issue in engine, it still will be in late versions. Dev’s should patch each game individually. And that’s probably won’t happen (one can not simply update ue4 version).

Add to the list of affected games:
Hellblade - Senua’s Sacrifice

You can add Ark: Survival Evolved to the list of affected games.

I see there is a jira bug ticket on this issue: UE-42280 & UE-51650, I have two EVGA Nvidia 760 in SLI configuration. Looks like UE team is trying to figure out how to reproduce, maybe this will help?: I crash maybe every 3 minutes in ARK on the Island map, sometimes I can make it a few hours without a crash but thats pretty rare. Sometimes I’ll crash when opening any inventory, sometimes when it’s dark on the screen I crash. During hard rendering of scenes you would think it would crash but it seems to do fine.

This bug is still present even with UE4.17 games…

This is still happening in version 4.18. This may help people working on this, as I got a clue as to what is going on when I solved this. My ancient laptop brought me here. I have a Toshiba laptop Win 10 w/ 4GB RAM with an AMD E1-1200 APU with Radeon HD Graphics 1.4 GHz (yeah, a pukie system that I use to test worst case scenarios). I get this error every time when my laptop is unplugged and is using battery only. When it is plugged in however, no issues whatsoever (except the awful lag that is expected). This may also be why some people are finding this issue intermittent. In the case of a desktop computer does one have good power with enough wattage to support their video card?

Thank you so much! This solved the issue for me (also using 4.18.3, this issue is definitely still unsolved).

I would’ve never guessed it myself… and yes this issue was intermittent and I could not figure out why.

As for the lag - I assume you mean the ~0.5 second delay that comes with showing the video stream in engine?
If so then first off all it’s comforting to know I’m not the only one having this issue… and second, have you found any means of minimizing this lag/latency?

I am glad that your issue got resolved with my help!

I think that Epic may be getting a “bad rep” because of this issue. I think the error needs to be clarified when shown adding the possibility of a power issue with their video card. EG: Running a desktop computer with a high end GPU and only 350 watt power supply for example could increase risk for this happening. The error may even be a good in regards to preservation of the video card and their computer system itself.

In regard to the lag, I completely expect that. It isn’t streaming - it is a very low level laptop running some of my game demos for demonstration at the Unreal Discussion group in Pittsburgh, PA. It won’t even run the editor. As referenced earlier, I noticed the issue when I had decided not to bring my power supply and working off of battery as I would be testing at a library location to be sure the internet was working (the demo project was on web widgets in Unreal). The speed of the CPU / graphics card though I don’t believe had anything to do with the error - the power to the GPU did.

Had this issue trying to play Fortnite on Windows 7, this is how I was able to resolve it.

I had a bit of a hard time with it and verifying did not do the trick, after some failed attempts of finding the solution I got tired and just did all I could think of to remedy the issue.

What worked for me was:

Changing the registry settings for the graphics adapter to cause it wait a bit longer before crashing in case the adapter was halted, these are the DWORD I added:

I then installed the latest DirectX driver from the microsoft update site for Windows 7.

In retrospect, probably just installing the driver could have solved it, but since I had already made changes to the registry, I figured I’d just modify it with the available values.

Hope this helps someone.

I install NVIDIA Nsight Graphics and it’s work for me…

if you are using a laptop… do the following first.

IF THE CRASH OCCURS… DO THE FOLLOWING.

AFTER DISABLING BATTERY BOOST ON NVIDIA GEFORCE EXPERIENCE… TRY THE ABOVE 2ND STEP AGAIN. NOW…IT SHOULD BE WORKING FINE MOSTLY. Thanks man, worked for me and appreciate your help

I have tried posting a comment several times. Here is try # 4.
I am having this issue in Atlas. Repeatedly. I have installed the updates for all of my drivers, verified game cache, not working. Is there not a permanent fix yet? This seems like a very old issue that should not be happening 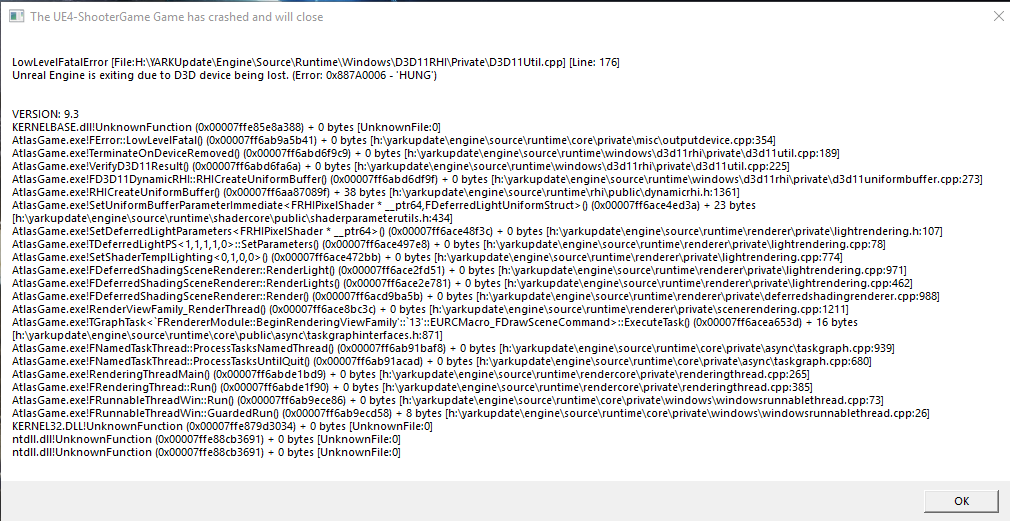 Ran into this error with my game/presentation, packaged in 4.19.2 on an old rig, win7, integrated graphics card on some gigabyte G31M motherboard. Or was it Asrock?

Anyways instead of being ridiculously slow it just won’t run. I presume it does require an actual, not completely trash vidcard with installed drivers :).

Bump. Issue persists. Especially with Atlas as of this post.

Built this PC 6 months ago, Have high tier specs, ample power etc. But even when I run Atlas “Low memory mode”
and have disabled every in game overlay: Xbox gamebar, Steam, Geforce (which helped a bit with the crashes as they were also triggered by the overlay popup banners) I can’t seem to fix it.

sometimes when I move into an area where it’s loading and I’m sprinting, or hit another key, or my character like i dunno blinks, Atlas crashes immediately…

Other times I can Fly over the sea on a glider, dropping grenades, fighting the god ■■■■ Kraken with 40 other people doing the same and have no issues. Hard to say what the root cause is, makes it rough to play though considering how unforgiving that game is.