A Preview of the upcoming 4.17 release is available now on the Launcher and Github. We have made this Preview available so that our developer-community can help us catch issues before the final release. As fixes are implemented, we will release updated previews throughout the development cycle. Please be aware that the preview releases are not fully quality tested, that they are still under heavy active development, and that they should be considered as unstable until the final release. Developers should not convert their projects for active development on preview releases. Please test on copies of your project instead.

We encourage users to check out the preview to try new features and inform us of any issues which we may not have caught. Links to known and fixed issues for this release are provided below. If you discover any additional issues with this preview release, please report them using the guidelines in the link: How to Report a Bug.

This list provides a brief summary of updates in this Preview which may benefit from additional testing. Not all updates may be listed. Full release notes will be made available with the final 4.17 release. We may not be able to provide additional information about updates at this time.

REMEMBER: Please report any new bugs you find by following the How To Report a Bug Guide

Great stuff! I look forward to the audio changes! The threads by dan are of great healp, and being able to work with them without them being experimental gives me a peace of mind.

A question I have is: What does “Baking out materials on StaticMesh instances” mean? Like, you make a material for an asset on the level editor, and then can just flatten out the final color, roughness, metal, textures etc?

Gameplay/Scripting Updates:
The Asset Manager now has Blueprint access and is ready for production. The Asset Manager is a global object that can be used to discover, load, and audit Maps and game-specific asset types in the editor or at runtime. It provides a framework to make it easier to create things like Quests, Weapons, or Heroes and load them on demand, and can also be used to set up cook and chunk rules when packaging and releasing your game. The Asset Manager tab in Project Settings can be used to set up the rules for your game. Primary Asset Types that are scanned by the Asset Manager can be queried at runtime before they are loaded, and can then be asynchronously loaded on demand. To use the asset manager, call functions on the native UAssetManager class (which can be subclassed for your game), or call Blueprint functions in the Asset Manager category such as Async Load Primary Asset.

Does this mean that we could make a game easily moddable like Robo Recall?

I was hoping that this commit which adds Temporal AA and Motion Blur support to Scene Captures would be included in this version, but it doesn’t seem to be working

Also, I’m getting a weird glow on static meshes in the Blueprint Viewport:

. Thank you for all the awesome.

Native member variables can now make use of uproperty markup to be exposed to Blueprints via ufunction accessors even if the property had been previously exposed directly using BlueprintReadOnly or BlueprintReadWrite markup.

What does this mean? It’s not making sense to me.

What does this mean? It’s not making sense to me.

Spectator screens are now supported on the Oculus and HTC Vive

Does it mean we can have split screen for two players? Player one uses PC with Keyboard and mouse and other player uses VR on the same computer?

Hold the phone, THIS should be plastered at the front of the notes. 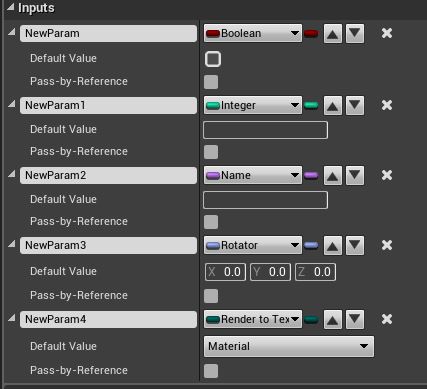 And what it is exactly ?

And what it is exactly ?

Any news on apple ARKit or taking google tango development inhouse? Plugin was abandoned by opaque media developers over a year ago… Maybe Epic could step in and bring the native support / own plugin?

The last one in particular, Yes Please

Please for the love of all things holy, tell me this is going to be fixed in this version…

What happened to ARKit? It doesn’t seem to be there.