I’m new to UE4 and I’m trying to understand some of the “basics” regarding lighting and Lightmass.

For example, I’m looking into color bleeding, i.e. the effect on which certain objects get “bounced” light color from other objects, as in the image below (the red on the pillars): 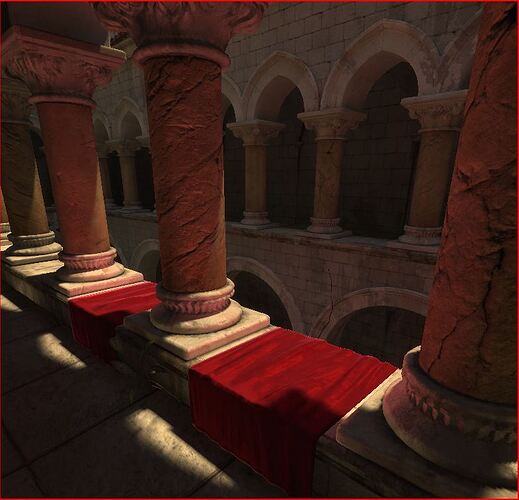 I was wondering, does the effect only work on static meshes or on dynamic ones too? And the object that “creates” the color bleeding has to be static, or also dynamic object may create the effect? For example, if I have a dynamic red cube on a white static floor, will the floor get some of the red around the cube?

Bleeding is a product of Global Illumination, which is pre-rendered. Only static objects can create the effect, for dynamic objects it will render a light probe for the location which can then receive some of that bounce lighting and make the dynamic object look more realistic, however it is not accurate.

Thanks for the explanation guys

HI guys, Thanks for the solution. I am new to unreal & I am also facing some similar issues in UE4 can i get solution if i want to remove this color cast as you are getting in Pillars similarly i am also getting that type of cast in my scene. Do i need to do anything in post process or in Any material change to remove this cast in static objects.