You can now view the much prettier version of the UMG documentation on UDN!

Wow that was quick!! Thank you Nick for doing this!

Subscribed to this thread

*EDIT: Well done Nick! this is extremely helpful, I was able to get a menu up and working!
Thanks again for writing this up, it will be easier to give feedback now that I know it was not a bug, I was just totally messing it up on my end!

This is exactly what I’ve been waiting for

You guys have been moving extremely well on updates. Kudos!

Really thanks alot! I will dive in to it right away -> starting up the editor

In 4.4 it seems like the “Widget Blueprint” is categorized under the root of “Blueprints” instead of “User interface” in the content browser. 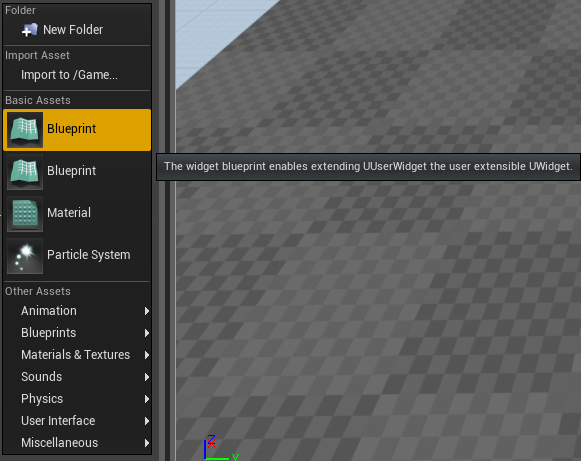 Edit: Strangely enough… it got fixed after reloading the editor.

@Nique Did you restart the editor after enabling UMG?

Well this post has blown my plans up. (in a good way) Was going to do a tutorial for hud to scene interaction but playing with this seems more inviting. Great work. Can’t believe I’ve missed this being testable.

@Nique Did you restart the editor after enabling UMG?

No, but restarting fixed it. I restarted it 3 minutes before your post

Is there a list of supported palette templates planned for in the future? For example: radio (buttons)? Imagine a City builder game in which you can select only one tool (road tool, demolish tool, zoning tool). For now i have to create a verticalBox with buttons and make them act as a radio button list using blueprint. (no problem but a template would be great! The combo-box has kind of the same underlying structure)

I like how it’s similar to Android ui system

Bug or am I doing it wrong?

When I remove from viewport the mouse control does not go back to the viewport automatically until I click back on it.

I might just be being stupid but is there (or is it planned) a way to anchor one widget to another? so for instance you can make a multicolumn css box style model?

I might just be being stupid but is there (or is it planned) a way to anchor one widget to another? so for instance you can make a multicolumn css box style model?

@MathewW Bugs with the viewport / mouse code in slate, needs to be fixed soon.

Thanks Nick! This is great way of checking out progress, an give suggestions as things develop

Nick - events (onClicked) will work on mobile with touch as well?

Nick - events (onClicked) will work on mobile with touch as well?

Yeah, it will work on touch.

Awesome! Going to give this a try tomorrow.

It’s awesome to see UMG coming along so splendidly, keep up the the good work!