Hey there, I have just created the new VR Sample Project for the first time in UE5 and once I loaded up the project, my CPU usage went to 100% and has remained there while compiling shaders, lagging out my computer for some time. I noticed the editor itself is taking up about half of the CPU and 10 individual Shader Compiler Work tasks are running 4% each, bringing my total CPU Usage for UE5 alone up to 90%, with the other 10% being typical processes that run in the background. This has not happened to me with any other project, including Valley of the Ancient. I am running a Ryzen 9 3900X, 64GB of RAM, and an RTX 2080Ti. It is installed on an NVMe SSD using PCIe Gen 3. Is this a common issue? 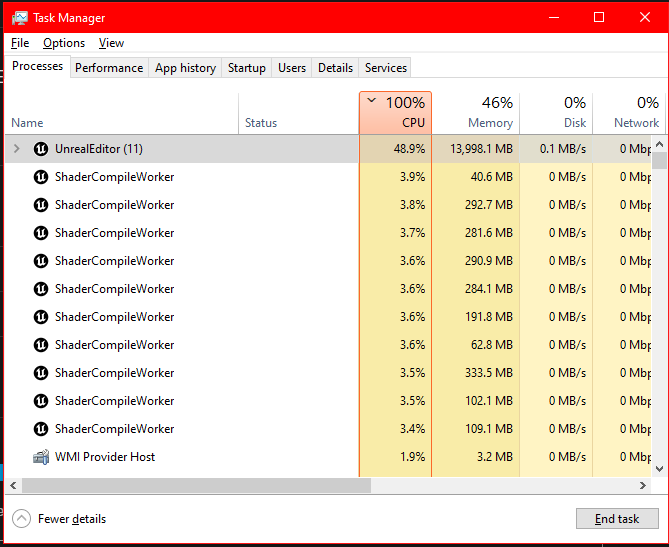 Hey did you ever get to the bottom of this? I’m having the same issue.

I figured out hot it has to do with compiling the shaders and there was a way to give the services in task manager a higher priority to make it a little faster but it didn’t quite fix the issue. I can do some more testing tomorrow to see if its still an issue for me or not.