Hey, I wanna share some progress on a scene I’m currently working on. I"m doing a collaboration with Bao who’s working on a warrior character at the moment (http://www.polycount.com/forum/showthread.php?t=138052) and I’ll do a scene for it. Someone from Crytek will rig the char, so collegue from Yager will animate it to make a little cutscene and another collegue from Yager will do VFX for us, so we have a nice little collaboration going on .

The scene still needs tons of polish, and a lot of cool ideas are still not in, that I’ll definiately will work on next. Stuff like a door, cool ornaments, smaller details, texture polish, chains hanging down, some foliage, etc… . Tech is Unreal 4.

I’m looking forward to your feedback and will update this thread frequently, cheers!

Wonderful atmosphere, and his character is coming along great! Looking forward to seeing it lit in the scene!

Awesome scene, i’m loving it. Keep up the great work.

This is looking really nice so far mate, your attention to detail is outstanding! The lighting is awesome! Also the character concept is fantastic! I’ll be watching this thread for sure.

Coming along nice Lenz! Call me if you need any additional support with this

Fantastic Scene lenzmonath. I am very excited to see what you will show us next with your project. Be sure to keep us updated as you progress along in the development of this Warrior scene! Have a great day!

Really well done! I’d love to see some materials/maps behind the scenes shots.

Awesome!!!
Can’t wait to see the warrior on the scene, his face is very realistic

Small update to my scene 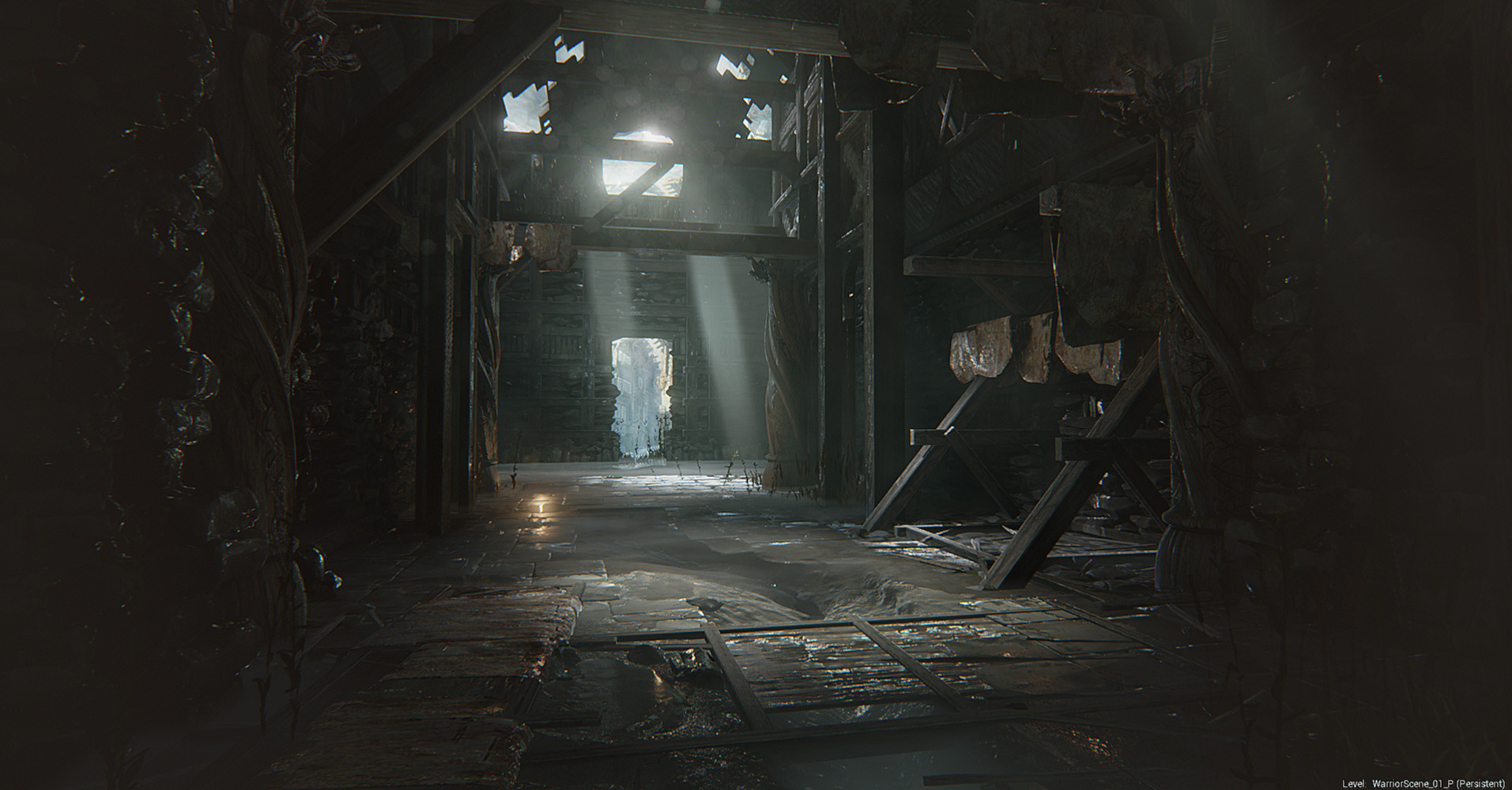 Small update with some new props 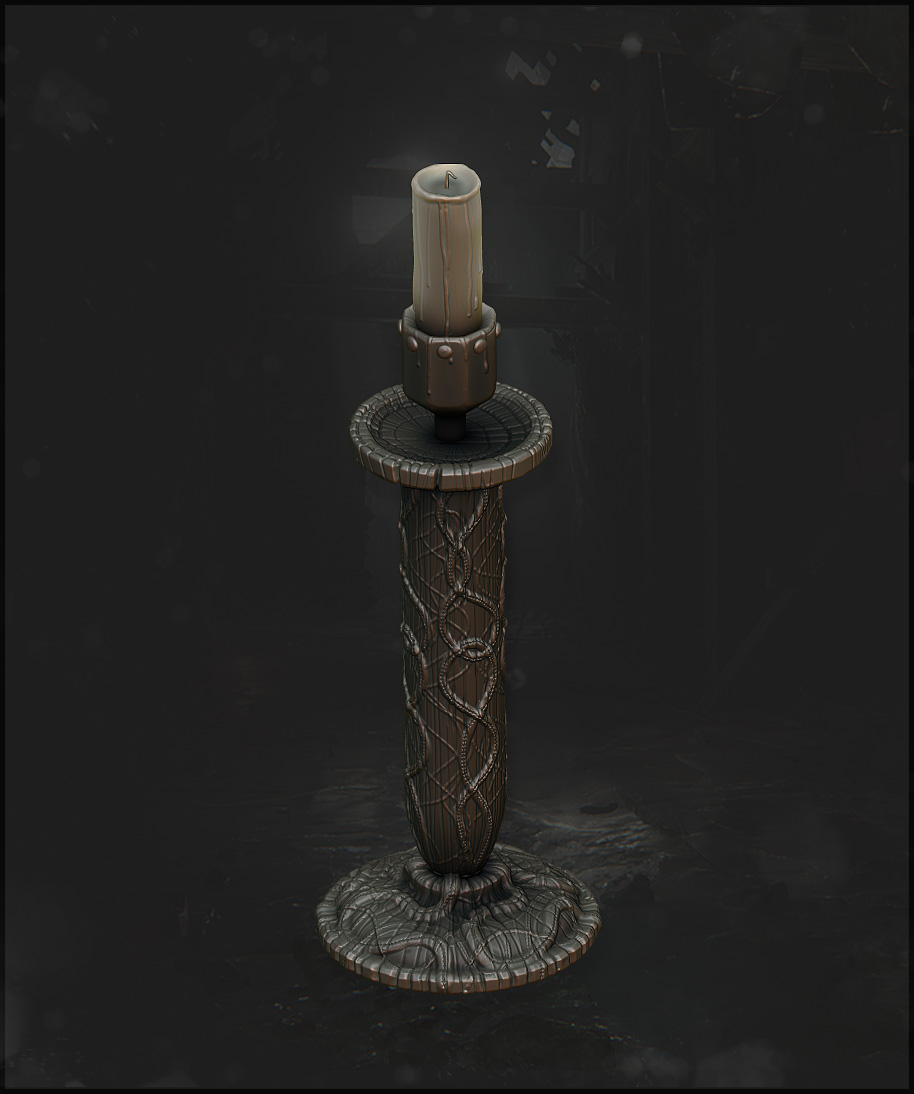 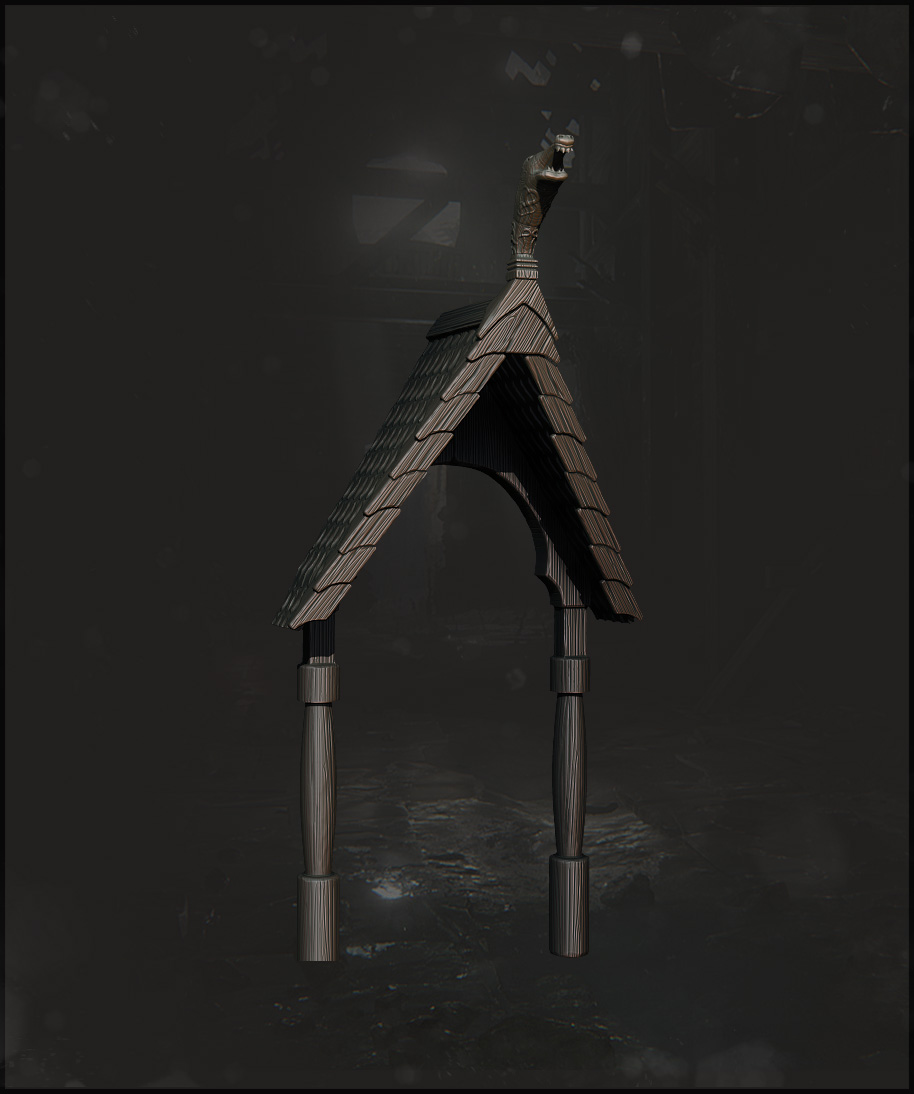 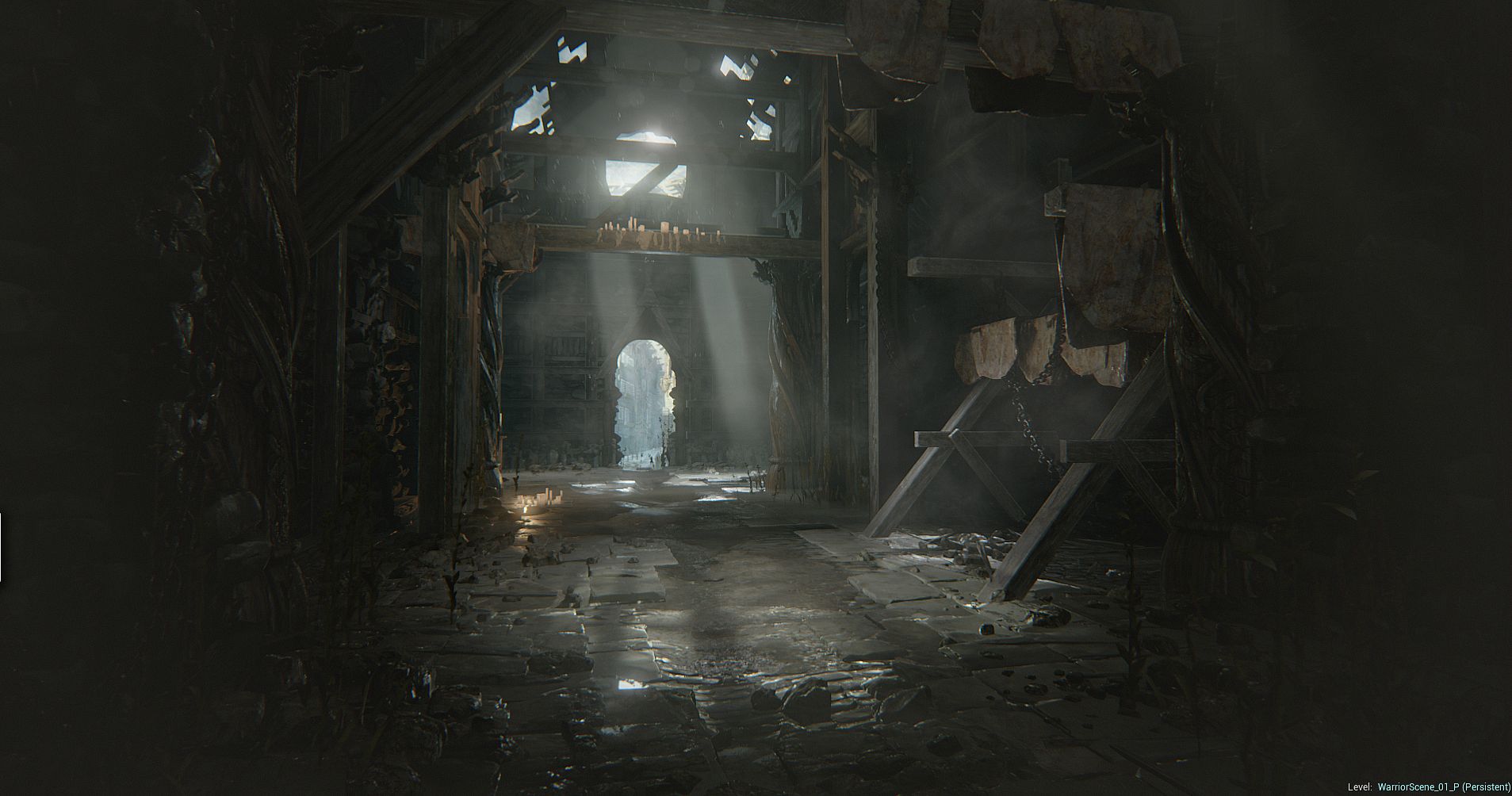 Hey Guys! Since i don’t want to create a new thread i will hijack this one… guess it shouldn’t be a problem since we are doing a collab

Just wanted to say that Sarah.Mai and Deadalus will also join on this and I guess they might post some screens in this thread too. Really loving the new subsurface profile! WIP though 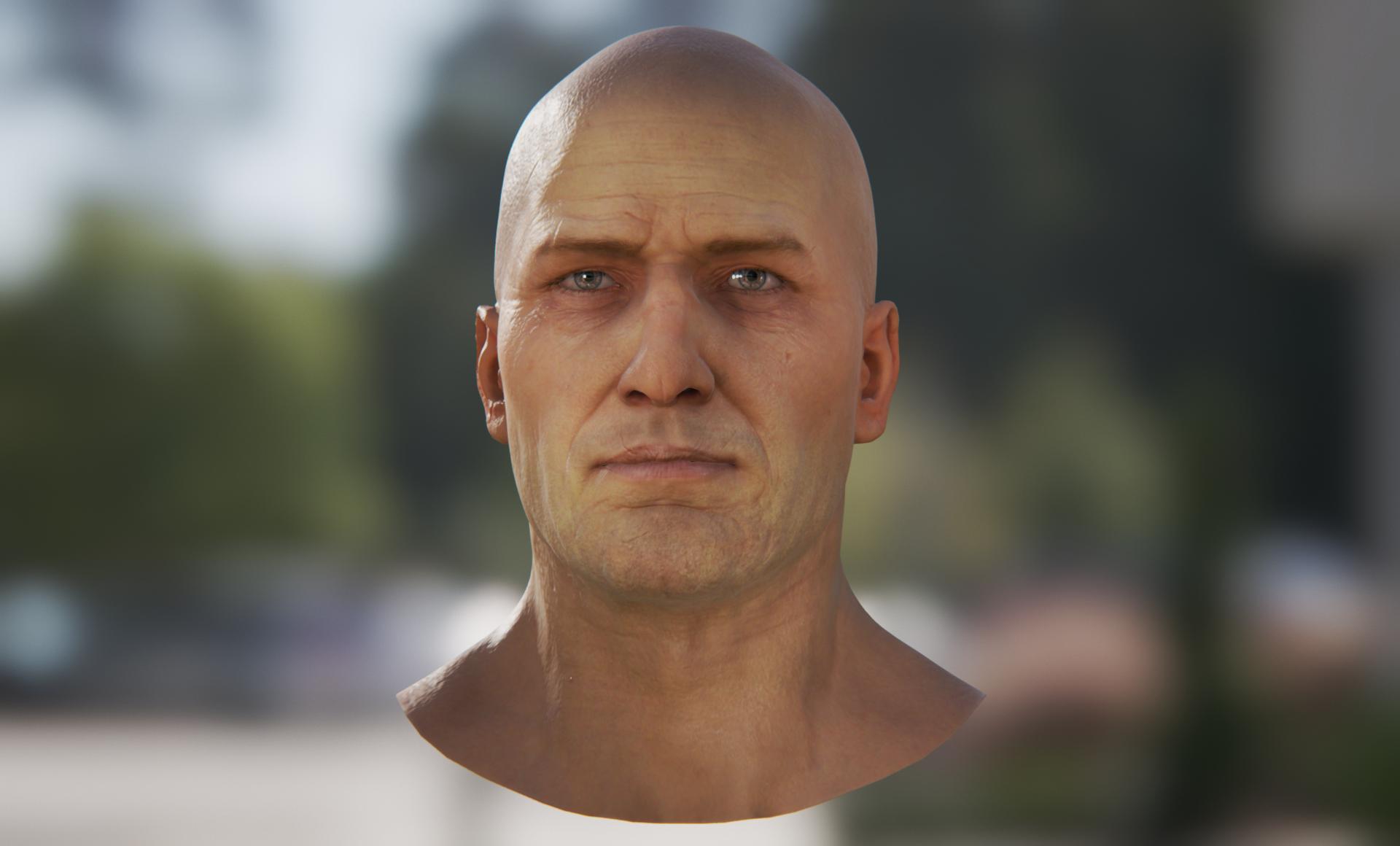 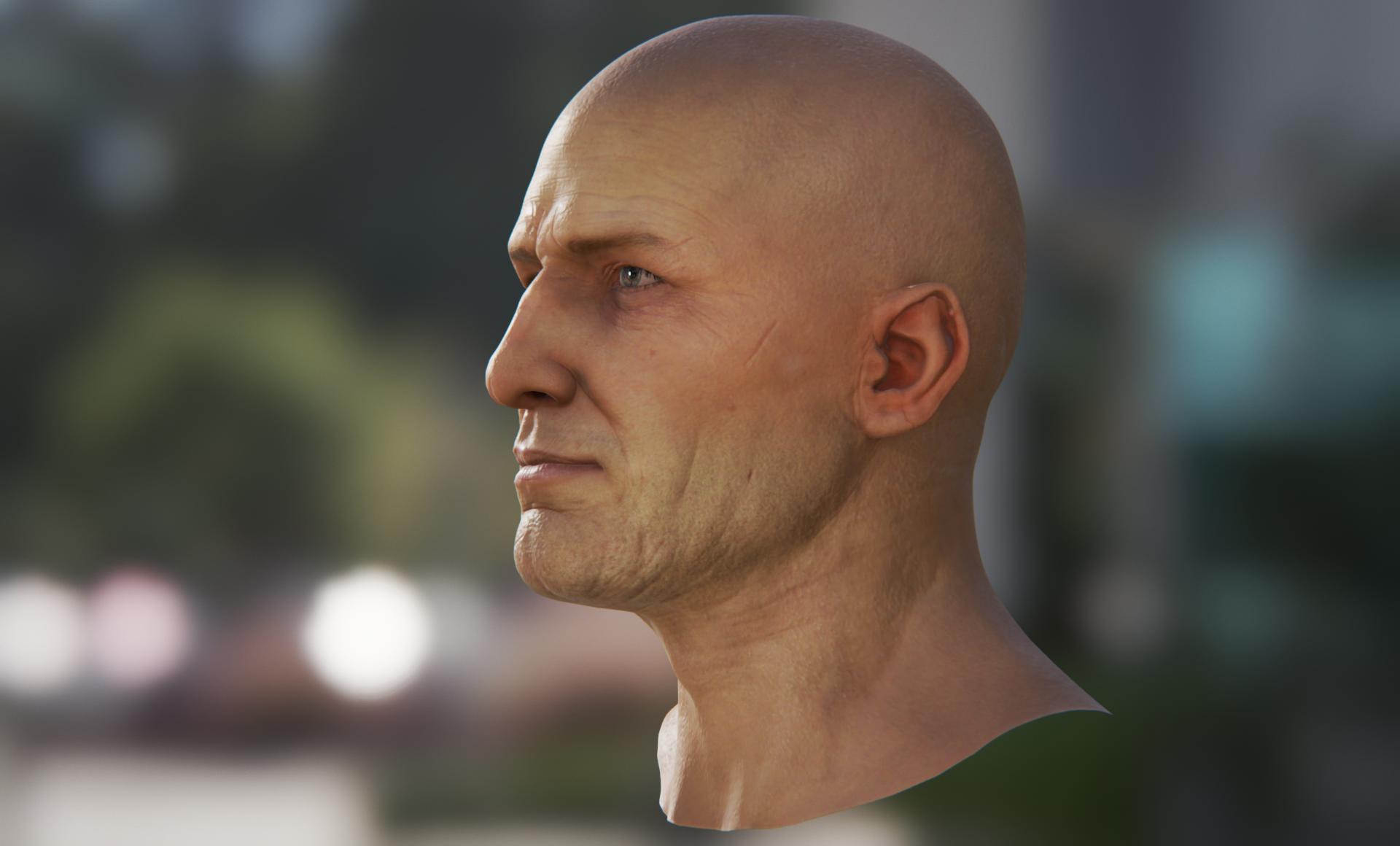 Now thats what I am taling about!

Awesome improvements man. Yeah…we still gotta figure out the source control stuff (so any tips are greatly appreciated^^) but this will get niiiice

Hey Guys! Since i don’t want to create a new thread i will hijack this one… guess it shouldn’t be a problem since we are doing a collab

Just wanted to say that Sarah.Mai and Deadalus will also join on this and I guess they might post some screens in this thread too. Really loving the new subsurface profile! WIP though

Finally more professionals are joining the fray, and fellow Polycounters to boot! Subscribed!

great. can you tell us more tecnical informations?

Do u mean me or lenz?

Wow 0_0 that looks AMAZING BRO. I can’t wait to get started with ue4 :X

So, I havent yet had the chance to get my hands on the scene (since we are still working on a way to get nice source control to make sure everyone from the team can sync and submit stuff easily), however lenz was so kind to give me a quick flythrough and also told me how he already achieved certain things. So I can at least just share some basics with you^^

Regarding the character, its actually not that technical, because its “just” (höhö) some very good character work getting the last finish by a now very nicely working skin shading model

So first of all, kudos to Bao for such an amazing model! Second…big thanks to the guys at Epic (points at Martin Mittring) for making Jorge Jimenez´fantastic research work on Screen Space Subsurface Scattering a part of Unreal Engine!

Interesting thing about the character in its current state: the eyes are probably not shaded in the way that comes to your mind first

To explain you a bit my thinking when I tackle materials and surfaces, I always try to start in finding out how the object is made in real life, which parts contribute to how it looks and what environmental circumstances further modify the look of things. I then try to find ways to mimic the observed behavior as close as possible. But sometimes, you start to realize that even if something should be like this or that…it still makes sense to not do it like that, because this effect is so rarely visible, that another effect that happens more often has the greater impact.

So, normaly eyes are made of organic, slightly translucent matter that reacts to light. So the first guess would be yeah…use sub surface scattering. This works nice and also does not look too bad. However, the eyes are always so small on screen and light has to hit it in a very specific way (eyes are also quite protected from the surrounding bones and skin tissue) to make the transmission or scattering visible, that it didnt feel appealing to me.

Also, you have very complex reflections on the eyes (which get faked often in video games) due to tha fact that the eye is actually a multilayered surface with different characteristics for each layer.

This made us try out the monte carlo clear coat shading model for the eyes which, in my opinion, gives us very neat and fully dynamic results without the need to fake any kind of lighting on the eye (not breaking pbr

I would like Bao to talk about the rest of stuff going on with the head since he built all of that stuff (I just helped with feedback on the shaders and lighting), but there is definitely some cool stuff going on

So, to quickly just give some specs of the scene:

Yeah…thats all I know so far

Hope it gave you some insights and cheers!

*I will just show you some screens and try to explain it. *

So the first thing is that the “eye” mesh consists of 2 meshes. One is a simple sphere and the other an “eye overlay” mesh hovering over the sphere where i projected the occlusion so we have a decent shadow for the eye socket.
Notice on the first screen there is a waterline at the bottom of the eye? Instead of making another mesh for it, i can control how strong the refraction and the specular are on the “eye overlay” mesh. I also added a normal map to boost the refraction. 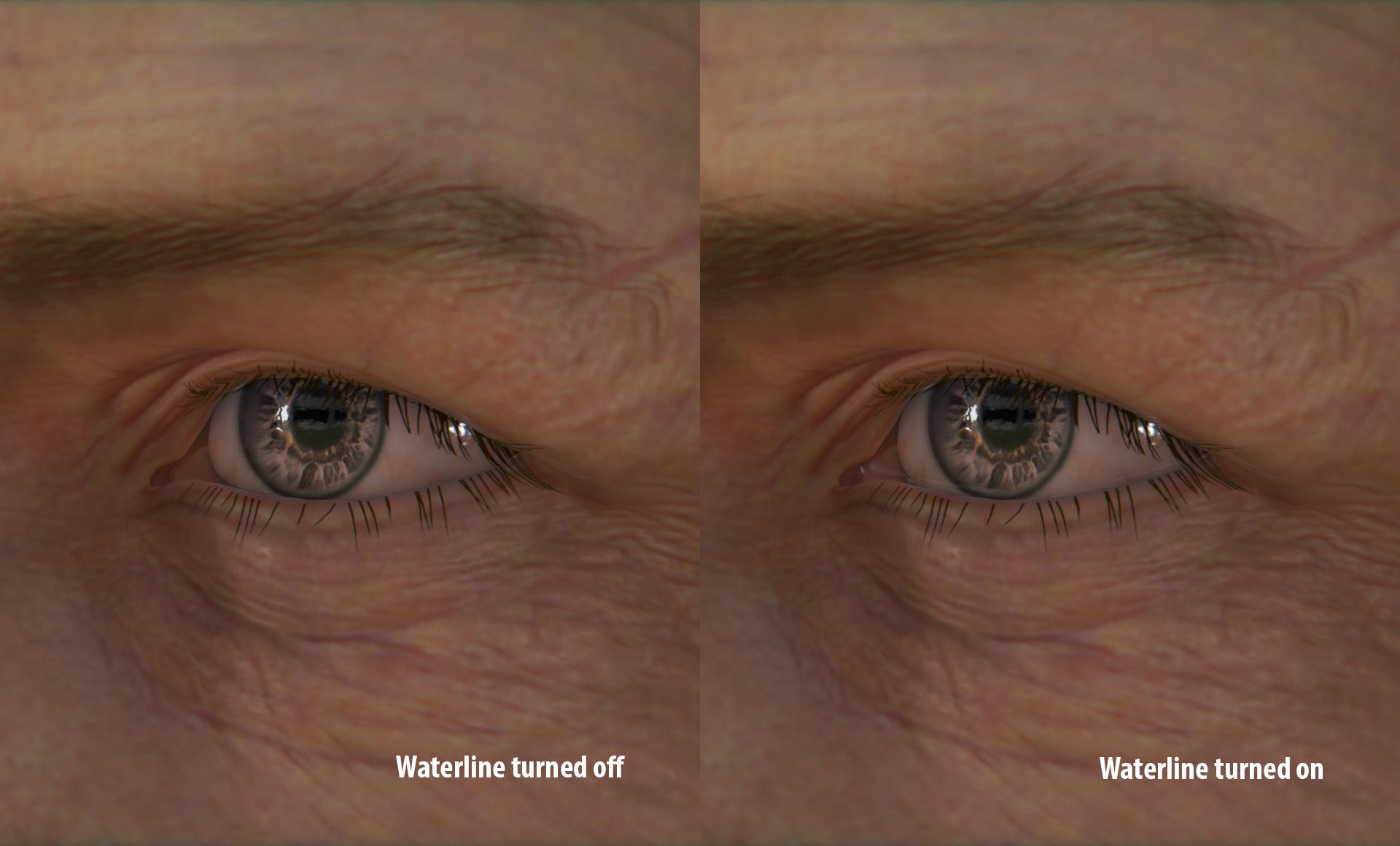 The sphere itself has an input of 3 normal maps. The Cornea Normal where you can fake the cornea popping out. The second normal map input is for the Iris, it’s just a nice little detail so the highlights will have a nicer spread. The last normal map input is a detail normal map for the eye ball so we don’t have a flat highlight on the eye sclera. I also added a Bump Offset to enhance the parallax effect of the cornea. 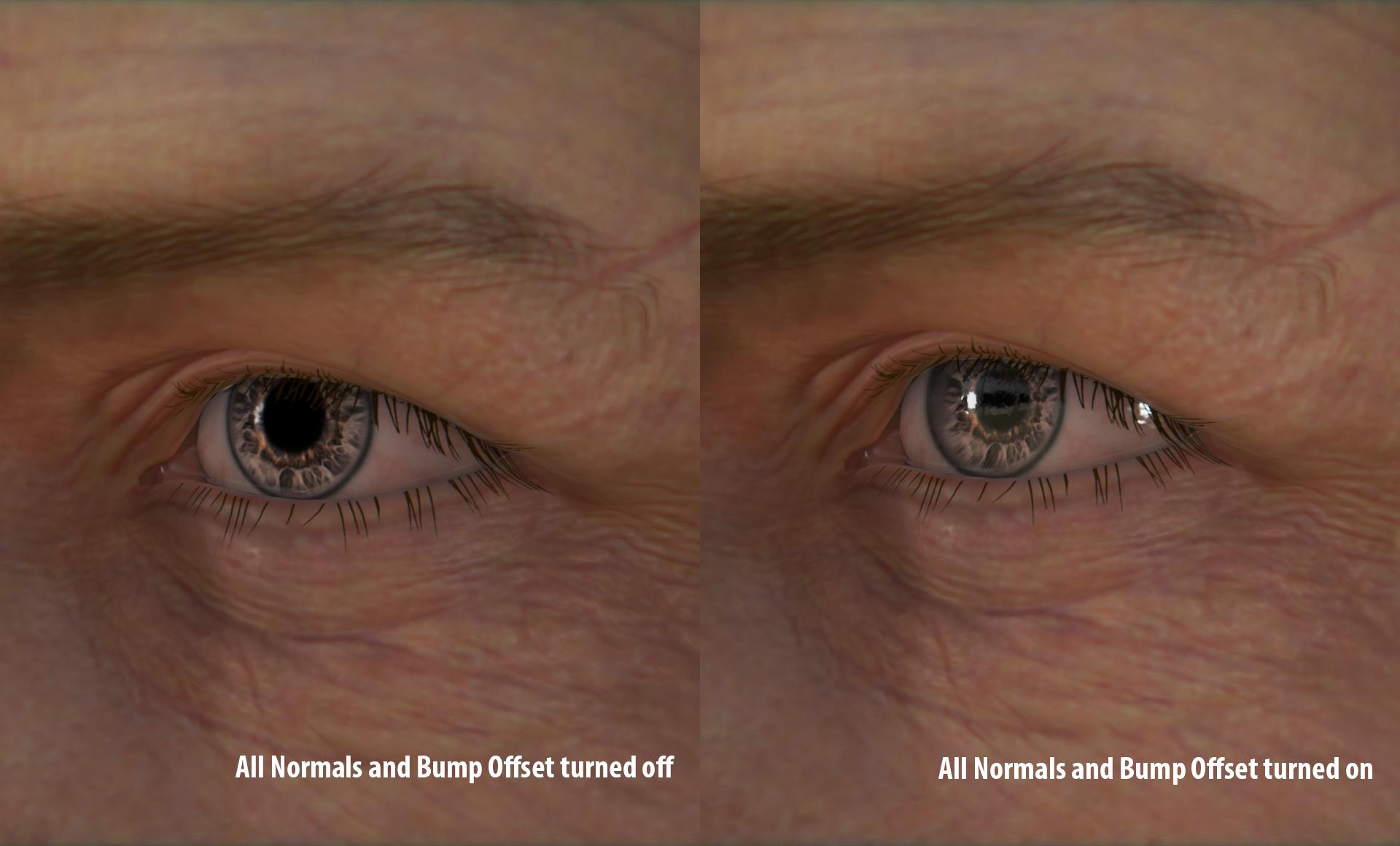 Deadalus51 also mentioned that in many videogames there is often a cubemap faked in the shader itself… we threw that out since we wanted to avoid the eyes being really bright in the dark. We also went for the clear coat approach for the sphere mesh which works pretty well. In the eyeshader you can also change 2 colors as seen in the screen below. I am also able to set how strong they blend into each other. 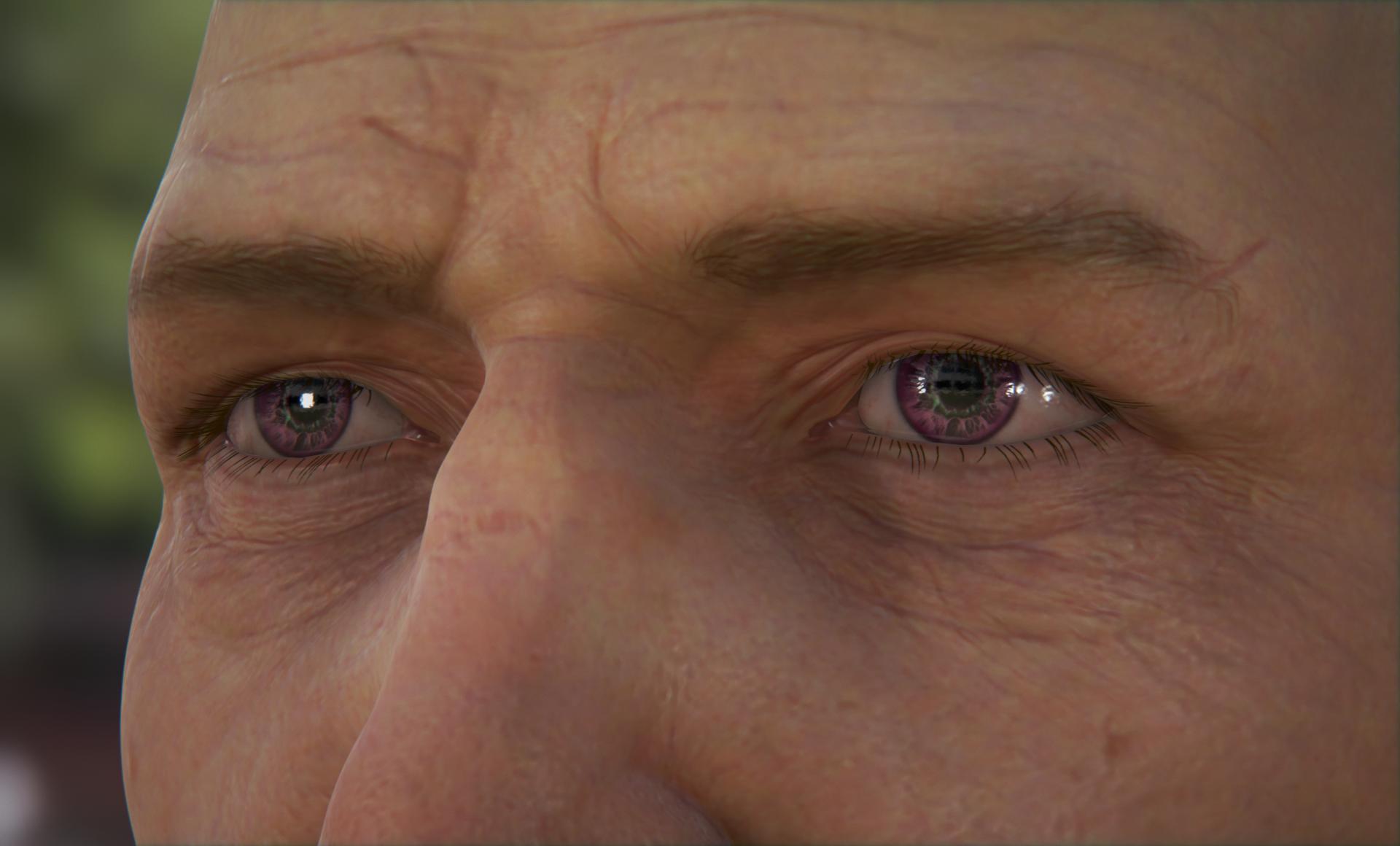 Lastly here is a comparison screen. 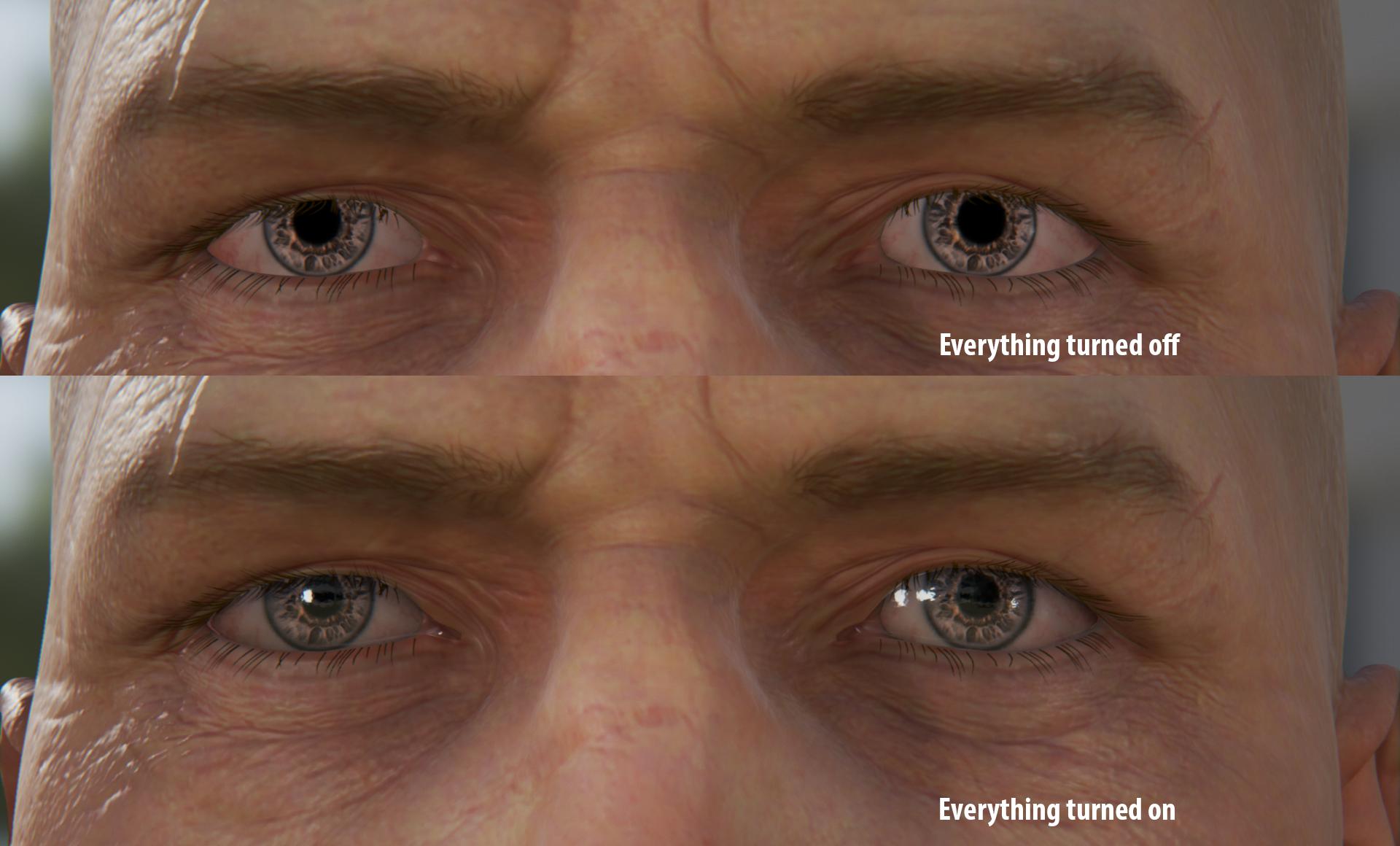 If you have any other questions on how i approached things feel free to ask me/us! We are happy to answer them all. In case you want to see the Material… I just want to say that we want to bring the whole scene to the marketplace