I am trying to bake multiple levels with lighting scenario, but the levels don’t bake at all. I put the lights and other non geometry stuff in persistent level, the sub levels consists of individual buildings, exterior landscape and interior apartments. The interior have their lights, except sun and sky lights, in their own levels.

After enabling Lighting Scenario and setting the sub-levels streaming method to blueprint no matter what I do none of the sub-levels get bake. Is there something I am doing wrong or is there a workaround for this. Any help is appreciated.

I dont know much about this but are both the lights and the geometry youre trying to bake lighting for set to be Static and not Movable or Dynamic?

The directional Light and the skylight are set to be stationary, All the geometry are static except some animated characters.
I think the problem is that I am using lighting scenario and blueprint to switch between streaming sub-levels with their own lights and those lights are affecting the rest of the sub-levels
Here’s a screenshot of the levels panel, 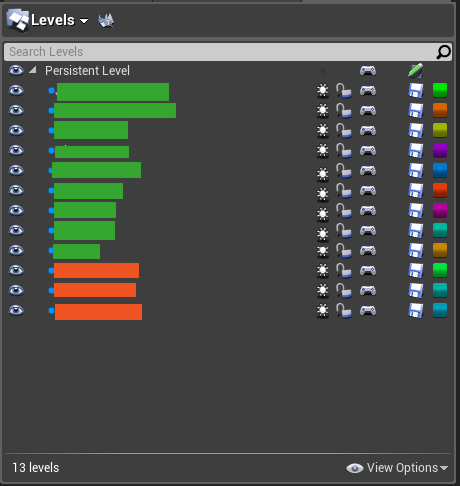 Sorry, it looks like you already know more than i do (I’ve never used those features). I hope someone can help you with this.

i think you may be using lighting scenarios the wrong way around.

you are generally supposed to put lights with different settings in the lighting scenarios.

So you have a persistant level… some sub levels with your geo and then seperate “Lighting Scenerio” sublevels containing lights with the settings for like different times of day or whatever.

For baking turn on all your sub levels and one lighting scenario… bake.
Do this for each scenario. (baking them all at once doesnt work properly)

Then when you play the game for whatever lighting scenario you want you turn that individual LS sub level on and turn off the others.

Actually I have tried doing that but maybe the way I am approaching this is incorrect,

I have a persistent level with triggers and navigation volumes. The first sub-level has like all the landscapes and exterior stuff with 8 high-rise tower and their interior within their own sub-levels.
Their is a lift door BP at the the parking area of each tower which unloads the sub-level the tower belong to and stream loads and teleport the player to the interior of that tower. The exterior remains loaded at all times.

Based on your description i think you have 2 options

Hmm, sounds like that will do do the trick. Will try when I got time.

Hello, I know it has been a while, but I have a similar problem as you had. I have a small flat with 5 rooms. Each room could have two states (lighting scenarios) and at the start of the game, I need to select them. but if I activate all rooms the engine will throw an error that there are multiple lighting scenarios active at the same time, even though they don’t really overlap as they are actually different rooms in different sublevels. How did you fix yours? any chance you would know a solution for my case?

Hi, thanks so much for the answer I need to preset the work and I’m kind of stuck on this ^^’, unfortunately, I can’t really follow your advice:
Here is my situation, is not day and night, each room of the flat has two states in one everything is nice and organised and the second one it’s all messy and dirty. At the start of the game, the room state is selected randomly. therefor I can’t really move the room content in the persistent level as their content has to vary. Any Idea what I could do?

I am guessing the two lighting scenarios are day and night. For that I would have done something like this.

By states are you referring to objects position and/or location inside each room which is randomly placed?

In a given scene, only one lighting scenario can be active at a time. You don’t have to move your objects to persistent level but you will have to move your dirty and clean lights to their own sub-levels. You can only switch between those two sub-levels not the levels containing your objects as lighting scenario is only meant for switching between different type of lighting setup. Switching sub-levels other than those two will invalidate the whole built lighting.

Some screenshots would be nice to understand what exactly you are trying to achieve.

Hi, I made a simple image to give you an idea I hope is clear enough, again thanks for sticking with me 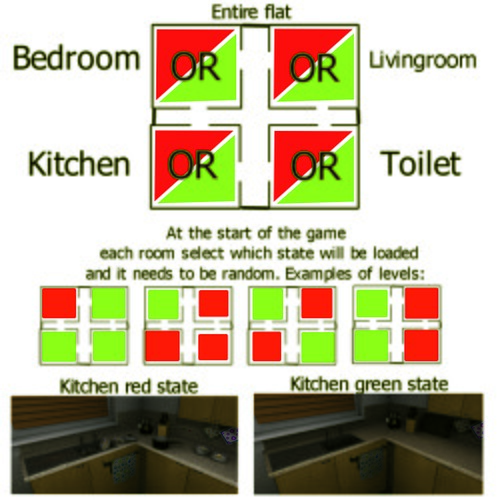 EDIT: No idea why it always uploads it with funny colors, but it should still make sense.

I don’t think lighting scenario will work in this case. As I said only 1 scenario can be active at any given time.

Start a new thread. You will have a better chance of getting help that way.

I have a few ideas you could try to solve this, but am swamped with work so I can’t really test those out before the weekend.
If you can wait I will post the result on weekend.

I did and they advise me to use lighting scenarios, so I opened another with more details and I didn’t have much luck. Such a silly thing to get stuck onto. Well thank you for looking at it tho, I really appreciate it.

That would be the best thing ever, I have a couple of plan B in the case is impossible but it would be amazing to achieve something like what I described.
I will need something done in 2 weeks so I have plenty of time as this is basically the only feature is really holding me back. Looking forward to hearing from you in a few days and if I find something too I will let you know. All the best with your work.