Some progress shots of work I’m doing for a client. Using low-resolution (8k * 4K > 1K) maps for now just to test the material Shader, which is where all the magic happens. All the Atmospheric stuff such as colour, density, etc. can be tweaked in real-time so you can completely change the look without having to swap out textures or using any texture lookups at all.

The final surface texture will have a 65,536 Pixel-Resolution around the equator, and be completely seamless. I’m doing this by splitting the globe into identical chunks, re-baking textures based on projection in Maya and having 4 UV-layers on each chunk for different resolutions/global mapping and various other things. I’d also like to split up the BRDF-styles for each section too, using Minneart for the clouds, Oren-Nayar for the Topography and perhaps just default for the oceans. Very tempted to write a paper on this when I’m done, as some of what I’m doing hasn’t been mentioned anywhere before that I know of and is a combination of loads of techniques (Can’t reveal the secrets yet!) Here’s the progress I’ve made so far (click images for High Res). 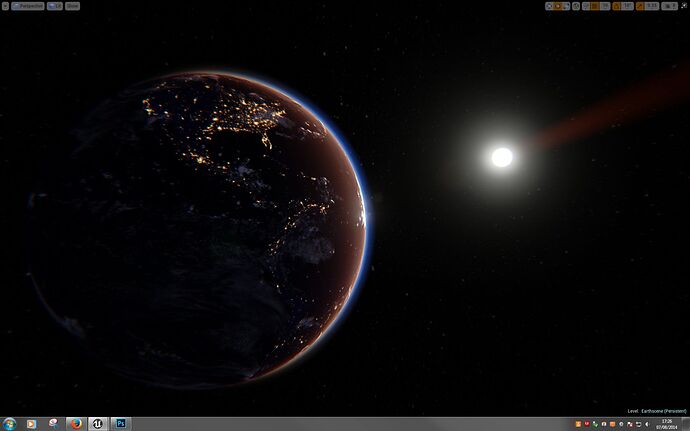 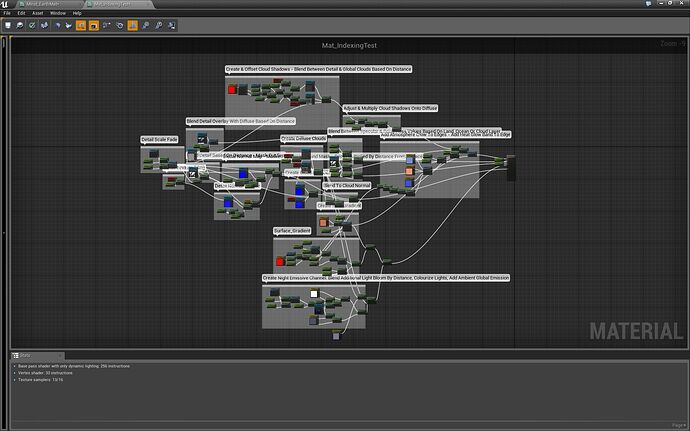 Bro Do U Evn Parameter 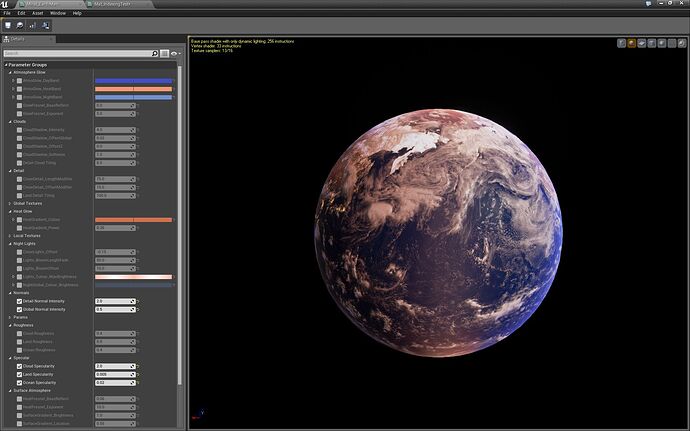 Massive shout-out to Everett Gunther for showing me a great way to generate cloud-shadows on the surface, and also a good starting point for the atmosphere effects. I’m likely going to switch to the method proposed by Sean O’Neil at a later date once I get some help translating the math, and also try to incorporate JBaldwins awesome eclipse shader. (If he’d be so kind as to help me figure out how to do all the offsets in the Material ;))

The final surface texture will have a 65,536 Pixel-Resolution around the equator

!!! That’s insane !!! Where can I get images with that level of detail?? (without having to purchase my own satellite?)

Is this going to be an interactive globe, or just animated through matinee? Looks great so far! Sounds like quite the project, good luck man!

Only downside, you need some serious RAM to work with textures that size in Photoshop!

Fantastic job TheJamsh! i like the ‘Bro Do U Evn Parameter’ tag over the last screenshot. Keep up the great work!

I’ve added yet more parameters and proper night/day masking now. I’d like to re-create a Gradient mapping tool like Photoshops in the Material Editor to make the atmosphere colour bands more interesting. I’ve seen it done in HLSL, but the Custom node doesn’t work in UE4 at the moment

Thought I’d better post an update! Several months of trial and error and ridiculous amounts of texture re-projections later, I’m getting there! (Sorry about the JPEG quality :() 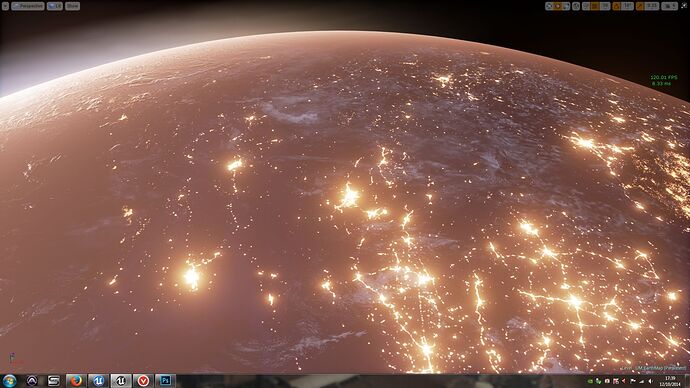 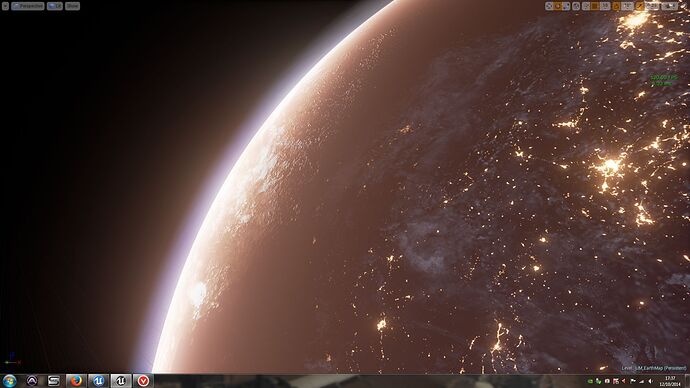 The city lights are too bright i think, but the shader overall looks pretty awesome.

The city lights are too bright i think, but the shader overall looks pretty awesome.

Thanks Jacky! I admit I boosted the bloom a little for extra eye-candy, but yes, perhaps they are a bit too bright

A few more details available on my blog (in sig).

Wow! Looks amazing! Do you notice any significant performance impact with it?

Wow! Looks amazing! Do you notice any significant performance impact with it?

I doubt it now that he has a GTX 980, only 8ms for that scene, that’s very impressive. I want one!

Looking really good man! Looks pretty realistic, the clouds have a good depth to them, they look separate from the ground image (really ‘3D’ if you will), adds a lot to the scene. Nice work!

As for performance, I WAS noticing spikes when streaming in the textures (lots of things being dumped in and out of GPU memory each frame). Since then I’ve turned off the Mip-Maps (no aliasing artefacts yet) and the performance remains a solid 120 FPS wherever I am in the scene! Still more to do:

I doubt it now that he has a GTX 980, only 8ms for that scene, that’s very impressive. I want one!

please release this in marketplace!

please release this in marketplace!

I can’t I’m afraid as it’s for a full product! I will however do a more detailed breakdown at some stage.

Just gorgeous, incredible work, looks awfully close to this, but in real-time:

If this is for an installation and not widespread distribution, I hope you can at least share a video of the final product. Good luck!

Just gorgeous, incredible work, looks awfully close to this, but in real-time:

If this is for an installation and not widespread distribution, I hope you can at least share a video of the final product. Good luck!

I’m using Gravity as my inspiration, still a fair old bit of work to do! There will most certainly be a video at some stage, but when it’s finished

Now what would be really neat is to create the Aurora Australis and the Aurora Borealis in realtime. I have wanted to create the auroras for some time now (just haven’t gotten around to it).

Some other neat things you could create in an earth shader: