Go to Window → Levels; then check whether your new level is below the first one, if so, remove it. You might accidentally connect them.

I made a new level by duplicating the First level, with save as, and then I deleted most things in the level except the player start and the post-process global volume. I then added new objects to the level. But when I pressed play, all the objects from the first level and the new level were present.

I then returned to the first level and pressed play. Once again all the objects from both levels were there! This is a strange glitch. How do I fix this?

I tried reopening the editor and tried to play the first level again, and it crashed again

I did this and it turns out the new third level is the child of the first. However, all options to remove it are greyed out, and selecting it and hitting delete or backspace doesn’t work.

Edit: I clicked load, then was able to click Delete. I said yes to the dialog to clear dirtied children. However it was still there, just greyed out again.

The level would still crash every time I tried to play it. I re-added the assets to the third level, and it no longer would crash. Next, I tried completely deleting the third level… and it crashed on playing the first level again.

This should work, also it does delete this level from content browser. 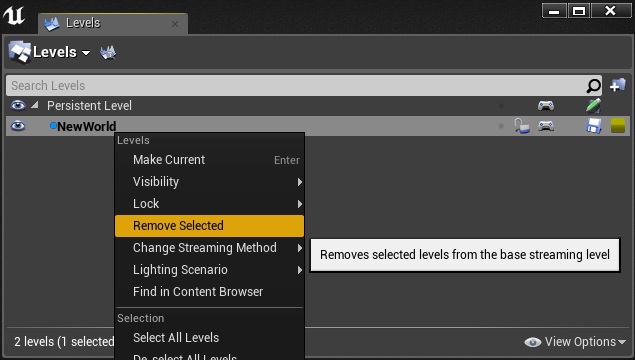 That doesn’t seem to be an option. I’ve tried unloading it and clearing parent. Neither fixes the problem. 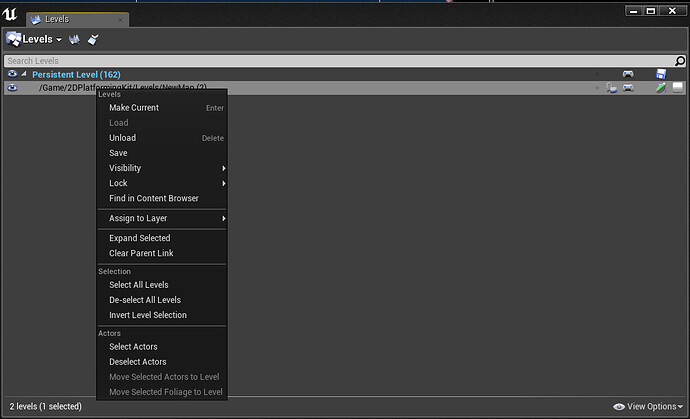 Marking this question as resolved simply because I’m no longer working on this project and ended up having to create a new level to fix the issues.