Can I just say that I’m actually kind of excited about this! I know there are other “jrpg” solutions on the marketplace (including the big free one), but I love your presentation of this and the stylized look of the template. Think you kinda nailed the aesthetic in a generic way perfect for building over the top of.

1 - When out of combat the option to display the other party members as pawns that follow your main character around at a short distance. Bonus points for a key bind / function to swap around among them and take control of them. It’s shame that of all the RPG systems available for UE4 none of them focus very much on the traditional “party” so it’s nice to see your implementation of that classic D&D / JRPG trope. I’m not sure any of them actually show the party “in the field”. If you implement something like this it would be cool to have some adjustments for either having the pawns following in the old FF style “conga line” where the party is just a snake chain of people OR adjusted out spacing so they cluster near you and one another in a small group the way followers sort of hover around in Bethesda games like Skyrim or Fallout 4.

2 - Combined with #1 above if you make adjusting the camera easy it might be possible for users to then implement the top down Unreal project to create a kind of isometric game like the classic Baldur’s Gate, Planescape (or newer iterations like Pillars of Eternity, etc). Having the entire party shown running around in an isometric view that switches in combat to your JRPG over the shoulder view would work quite nicely I think

3 - Make sure it plays nicely with your 2D conversation plug in (of course!). That will help bolster new interest in it.

4 - Some event blueprints / system would be awesome. Based on your template sample video it looks like you already have basic intractable triggers like chest and boss enemy. And I’m guessing some kind of trigger for combats. Mostly though I’m thinking of a “shop” to buy and sell gear and/or items if you don’t have one. Also a “tavern” or “guild” screen to hire / create / dismiss / swap party members… or some event to add and / or remove party members.

I know these can be done by the end users, but a lot of folks like to have features built in to reduce development time (and frustration!). Having easy to use blueprint tools right out of the box is what could really make your kit shine.

Anyway best of luck! I think it looks great and can’t wait to see the final release:)

PS: another tangent (and I do apologize, but you seem to focus on RPG genres that tend to get missed or ignored… so you would be a GREAT candidate for this one LOL) - I’m staggered that no one has made a grid based RPG kit. I’m speaking of the Might & Magic style FPS RPG where your party moves a square at a time and fights turn based battles. This has made a resurgence in the last few years with games like Legend of Grimlock I and II, Might & Magic X Legacy and the new Bard’s Tale game. I think something like this would be dead easy for you to create by leveraging concepts from your Turn Based RPG Kit and more so the Interactive Story Plugin. Really though it’s just the JRPG system stuck on top of grid based movement. My kingdom for a kit like this

@JRavens Thank you very much for the detailed suggestions. I felt like you are reading my “to do” list and that is crazy!

I already thought about the things you listed here. But for the initial release I will have what you saw in the video. First update will probably be about bug fixes and small changes and then I will start implementing big features.

Displaying party members around the main character in the field will come when I implement the party system because right now if you have 10 characters they will all appear in the battle… So I wanna have an in game list to limit party members and then I can show those in the explore mode as well.

I wanted to release this template with my conversation 2D plugin as a bundle but I dont think it is possible… But I will definitely show that they work together.

I will cover the interaction part in the documentation so users can create any interaction they want. The shop system will come when I implement the equipments

For the HoMM3 style of battle, I guess marketplace already has something like that, maybe Advanced Turn Based Tile Toolkit can be a good start.

The asset has been released! 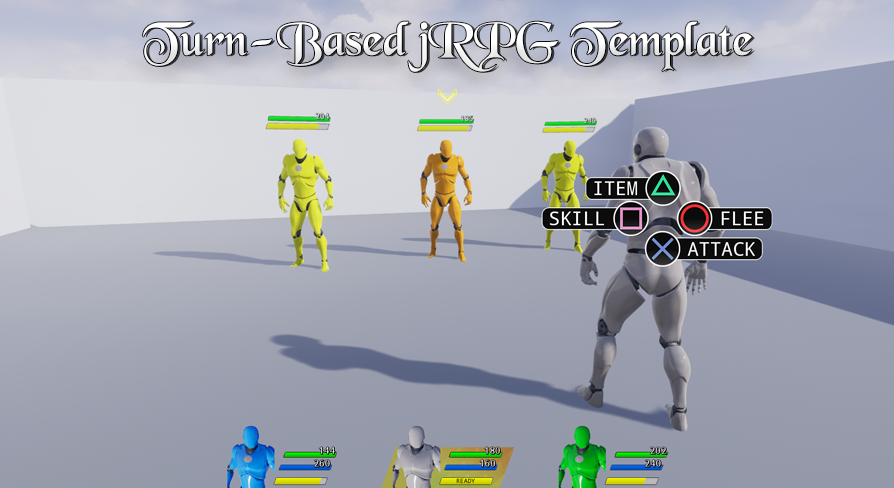 @LF45 I am working on party system where you can choose which units will be in the battle. I will release this update this week.

oo Thats sounds awesome i bought it yesterday i will allso buy Conversation2d plugin Thank You.

@LF45 Thank you!
Let me know if you need any help through Discord

There is a variable called “newGameMapName” in Main Menu widget. Change that variable to load different map when player clicks on the New Game button.

A Thanks allot i can do something with that.

@LF45 Good luck and have fun

@LF45 yes you can. In the documentation (Section 5), I explained how to integrate the plugin to the template.
You can come to Discord so I can help you faster there.

i will install discord

Added an option to make turns based on Speed stat. (Documentation Section 2.3)

Action time is moved to stats and can be set to change when unit levels up. (Documentation Section 3.3.2)

I have added Revive Potion that revives a dead unit in or out of battle.

Shrine is a new interactable that fully heals and revives all player units.

Some skills can be used outside of battle now (Heal skills)

Added an enum to BP_JRPGPlayerController blueprint to change main character in explore mode. Set the exploreCharacter variable in all player units to make this work.