I have ran into a little issue with my particle effects. Since I am working with a snow level I have added a few particle effects in the character blueprint to make it look like it’s snowing everywhere but in reality the snow is just attached to the player. So when the player runs into a cave, under a roof etc I need to deactivate these particle effects. I made a triggerbox and added a blueprint to it to tell when the player interact with the triggerbox the effects should deactive. However, the issue is that when I walk into it nothing happens. I have tried several solutions and I believe I have a blueprint now that should work but for some reason isn’t and I can’t figure out why!

Here are two screenshots to explain the situation better. The first one is to show where my trigger box is and how when the player walks into the cave I want the particles to deactivate. And here is a picture of the blueprint itself:

Hello! Thanks for a answer! I unfortunately do not have that much experience yet with Blueprint to understand exactly what you mean by all this. When I created an actor bp there is no such thing called “Trigger box” so do you mean I should just add a normal box without collision and remove it’s visibility from the game? Also when I have made the bool variable how does I make it go to true when a player touches the trigger?

Oh and also! Would it be okay if I added you to Steam/Skype? Might be better than creating lots of threads here on the forum!

With trigger box I mean a collision volume + in the settings of it at the bottom you can see different events - just choose the “on touched” event - in the event graph you have to “set” the bool (enable true) and connect it with the event.
Currently I’m not so active on skype as I get an overwhelming amount of messages each day and I dont have time to answer them all

Okay I tried to do it, think I got most of it right but for some reason it’s still not working. So I must have gotten something wrong! When I walk into the blueprint on the level nothing happens, it doesn’t seem to trigger when looking at the blueprint debug

Right, here are some screenshots to show how I have done it so far: 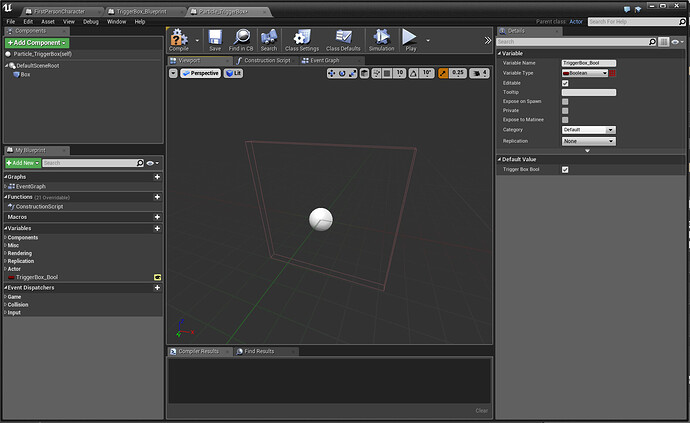