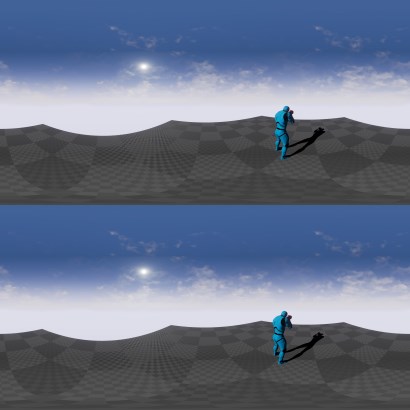 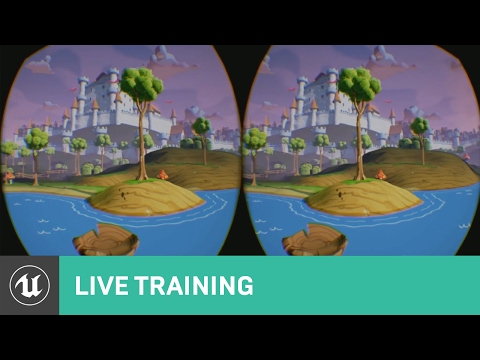 You have no idea how keen I am for this. I live in Australia and this will be around 4AM but I’ll be there!

5am in Eastern Australian time but worth it, I’ll wake up early to catch the stream

I’m gonna have to dust them down.

I am very interested in recording Stereo Panoramic 360 video that can be viewed in the Gear VR. If you could please address this topic I would be thankful.

So looking forward to this!

This plugin is exceptional at capturing 360 images indeed, I truly hope this stream covers the best approach to view a 360 video composed from multiple captured frames as a final step.

I didn’t get too deep into the subject but as far as I tried to do it, the result didn’t have a good quality on GearVR (the composed video itself was crisp, but when rendered it was like 240p).

I saw the stream today, but I would love to go back and refer to it. Is there an archive of the video somewhere? Specifically I wanted to see what the material settings were to display the stereo images properly.

Link to the stream for those that missed it.
https://www.twitch.tv/unrealengine/v/95733694

Hey, any of you guys know what material he created an instance of? was he working from specific project files? I’m lost at this point in time

Hi, i would like to know if there is a project example of this, i have been working in something similar to this but with plain textured rendered in Blender with Panoramic Equirectangular Cameras and work fine but this is a lot better. Also i would like to know if there is i way i can find the sphere you were using in your example because i did one and create an UV map but there is some math than i suppouse i am doing wrong and i have some small issues when using the texture and i have some deformations. BTW, great work, i always look this streaming videos and learn a lot. Thanks

Hey, any of you guys know what material he created an instance of? was he working from specific project files? I’m lost at this point in time

The Material was one that I made and then made an instance based off of that. I am currently cleaning up the project so that I can release here on the forums. Until then here is an image of what the Material I used to display the images in stereo looks like. 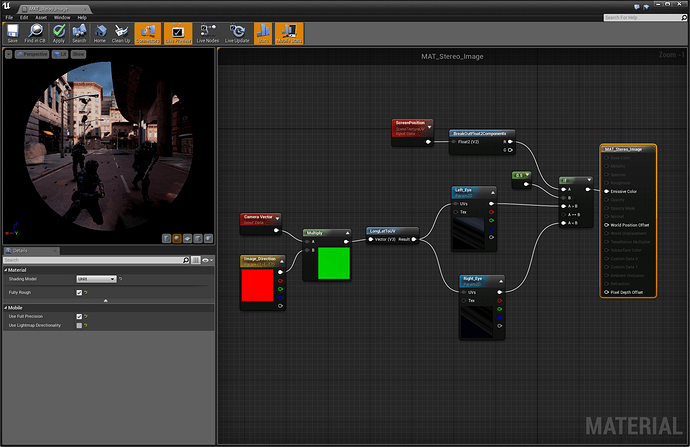 I saw the stream today, but I would love to go back and refer to it. Is there an archive of the video somewhere? Specifically I wanted to see what the material settings were to display the stereo images properly.

Check below for an image of the Material setup.

Hey, thanks for that great stream !
We are supposed to apply this material onto a sphere in the level. You mention it’s supposed to be a very large sphere. Could you detail this?
How large are we talking about here and is there any difference if we make a sphere with a diameter of a few meters around the camera/player or one that’s say … 500m diameter ?
Thanks !

Hey guys thanks for a good interesting training session, it taught me a lot from it

I have a question? I am currently creating a scene to put in my portfolio, If I would use this technique for the images how would I render it out and display on website based portfolio?

@Lex4n you can get the recording on youtube, go to Unreal YouTube Channel and you will get a priceless Treasure of all Unreal Videos.

ok,
super
and
where I can download “Stereo Panoramic Plugin”?

Hi, we have made a adjust to the material’s “ScreenPosition” node.

ok,
super
and
where I can download “Stereo Panoramic Plugin”?

It is a default plugin that you can enable in unreal. I believe it is in 4.12 and above