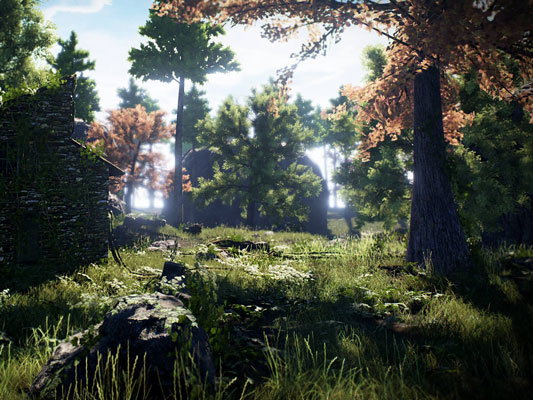 WHAT
Andrew Hurley is back and ready to continue exploring landscape development in this follow-up to his Getting Started with Landscapes guide. As he builds his materials and places foliage, you can expect to hear a lot of sage advice on developing for all kinds of projects, big and small. If you’re interested in getting started with landscape materials and foliage or just want a quick refresh, this is the stream for you! Will this also be uploaded to youtube later on? Cant make it to the live stream

Twitch offers vods, so you can watch it ~1 month after the broadcast.

And yes, they’ll be on YouTube like a day later (depending on whether Qlint slacks off or not

please do some sort of “step by step” stream, or at least on the importants parts of the creation process

it’s much better for understanding and learning in that way .

anyway thanks for makig this <3

Hello every one hope your days have been well, I am not so sure I am aloud to post this so, I just posted this video yesterday… - YouTube . This is my YouTube Video on how I have made Animated Trees and then export them into the Unreal Engine 4.14… I am Using Blender, I made the textures with Gimp, and then bring it all in to the Unreal Engine… It might help with people who are looking at creating there own assets. I really do apologize if this kind of post is against the rules, just thought it might help some people.

Hello Guys I know that the last link I posted was Animated Tree now I have started a series on foliage maybe this might help some people out… if they post this live training session it would work out even nicer for every one… any way I take textures made in Gimp build meshes with blender import them into unreal engine 4.15 … oh yeah and did I mention I show create LOD’s for the foliage as well cheers every one. - YouTube

Will this also be uploaded to youtube later on? Cant make it to the live stream

Yep, we put up youtube archives of all of our streams

Looking forward to this.

Currently working on a world with an 8129x8129 map size and at this scale, splat maps obviously just do not have the level of detail needed at a close range for layer transitions, so our project has been utilizing Slope Nodes on a few key layers with some great success…That leads to my question.

What is the best way of efficiently making ALL layers blend between one another with a sense of height and form between one layer and another? We’ve got about 20 layers now (most just color variants to keep texture count low) and there’s times where it’s just not appropriate for the Snow + Rocks layer to simply “fade” into a grass or any other layer for that matter.

My suspicion is that I’ll need some sort of additional height maps for every layer rather than being able to simply re-purpose the normal maps somehow. Not looking forward to the additional memory footprint on this already enormous material (and material functions).

I don’t have any other great videos up right now but this one sorta shows the problem. Notice how the Grass area just fades into the beach Sand? Is there a way of using the existing normal maps to make this sort of layer transition more realistic and if so, how? Some other Slope Node method with existing normals? Or would we just be inviting performance disaster at this sort of scale? Unreal Engine 4 Ocean Waves - YouTube This still image also illustrates it up close Ideas? Oh and please don’t tell me displacement mapping unless you think that wouldn’t impact performance on this map… P.S. - PLEASE BRING BACK UDK-TYPE FOLIAGE PHYSICS WITH BUILT IN MATERIAL NODES!

I’ve been really looking forward to this. I hope you’re able to cover setting up the materials and foliage to work with LOD.

There are a few methods to achieve this effect. You could use parallax occlusion on a separate mesh, distance field blending, and/or precomputed AO mask to help blend from a separate mesh to your landscape’s material.

Here is a great write up of the distance field blending approach.

I have 2 Layers: Grass and Cliff, both implemented as Material Functions which return MaterialAttributes. However, The Grass has a Tessellation Multiplier of 0, while the Cliff has a higher Multiplier. The Tessellation is reduced with the...

Can I somehow optimize this?
I only want the cliff to have tessellation.

It might be outside the scope of this video but anything on the links between Houdini’s procedural asset generation and Unreal’s in-engine stuff. I’m interested by where advantages between each lie, that sort of thing.

Terrain Tessellation is applied to Layer without Tessellation - Rendering - Unreal Engine Forums
Can I somehow optimize this?
I only want the cliff to have tessellation.

Two ways I can think of immediately that would do this for you.

I’d go with option 2 honestly, that’s going to get bigger and better shadow shapes and less tiling issues, but option 1 would be great if you can make the transition areas look clean.

I would have a few questions, guys. Are static meshes (and their LODs) placed by using the Foliage tool always Hierarchical Instanced Static Meshes (with their LODs) by default ? Do static meshes placed with the Foliage tool have some attributes preset (attributes that are not set when placing the meshes just as static mesh instances or hierarchical mesh instances inside a blueprint) ? And the last question combines the first two question into an example - if I wanted to make a pier area, with large number of shipping containers and barrels scattered around (after explosion), is it wise to use the Foliage tool for this ? Thanks.

Any suggestions for grass at high altitudes so it doesn’t “pop” into the scene?

Can the landscape grass node update on runtime? Last time I tried it, it didn’t update the placed grass.

How efficient are baking lightmaps for foliage? I’d imagine you’d need alot of texture memory for them to look somewhat decent. Any tips for optimization here?

What was the velvet shader mentioned?

Hi! Thanks for the nice stream, but I have a question. What’s up with the project files?