I need some help understanding how the movement axis work in UE.
I wrote simple movement functions that are based on the player camera:

When I’m binding MoveForward to [FONT=Courier New]Vive (L) Trackpad Y, I can’t move at all. The images I’m putting below will hopefully help you visualize what I mean:

However, when I assign Vive (L) Trackpad X as well, walking forward/backward works as it should:

Here’s my 1st question - why do I have to assign both X and Y axis in order to move just in one vector? It just doesn’t seem logical to me, there’s something I’m missing.

Secondly, I’m trying to make the player be able to move right-left as well. I’m setting up the axis with X axis only. This enables me to move to the sides as well, but it doesn’t work as expected:

When I add a new binding, Vive (L) Trackpad Y for the MoveRight, or even remove the X and leave Y alone - I can walk only right-forward and left-backward:

So my next questions are:

I’ve got it solved. For some reason, Vive controllers need to be set up differently than others. In this case, both MoveForward and MoveRight need to have both X and Y, but one of them needs to be scaled to 0. Don’t know if this is by the book, but it surely works for now. This is how it looks like, compared to Rift Touch and Gamepad (both tested, gamepad used was on Xbox One controller): 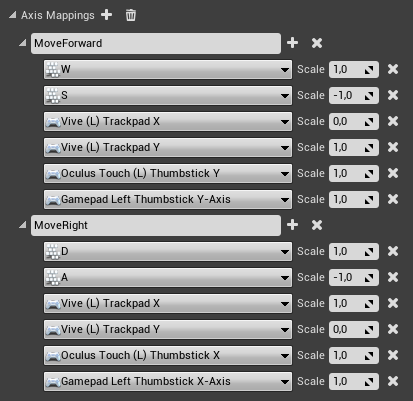 Thanks for posting the solution! Saved me a lot of headache.