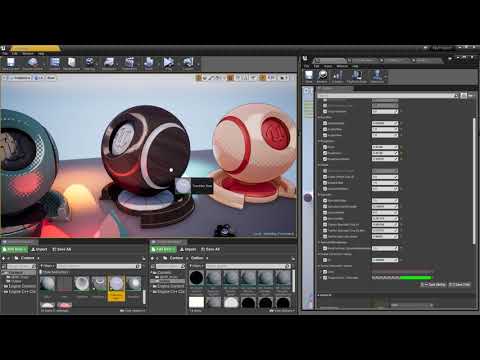 Repos & Downloads:
IMPORTANT: Unreal’s source code is not a public repository, so all forks of it (such as this one) also are not public. You HAVE to read Downloading Unreal Engine Source Code to link your Epic account to Github or the links will give you a 404 error.

Hello! I just wanted to share some custom shading models I’ve been working on. I’m aware of the shading models that have already been posted on the forum (1)](Toon shading model - Work in Progress - Unreal Engine Forums) (2)](Toon shading model for UE 4.20 - Rendering - Unreal Engine Forums), but I wanted more control over the shading on a per-material or per-pixel basis, so I decided to fork the engine, teach myself HLSL, and take a stab at it. The idea for these models is to have soft indirect lighting but controllable direct lighting so it’s possible to mix the default materials with the custom stylized ones. Note that the code does include a version of stororokw’s anisotropic shader ported to 4.20 since I wanted to build on top of the anisotropic shading to create a toon version.

I’m going to post my upcoming experiments as I try making some manga-style stuff in it, but I’d appreciate any feedback.

Since Offset is a parameter in every Toon material, you can drive it with some screen-oriented masks for halftone or crosshatch effects: 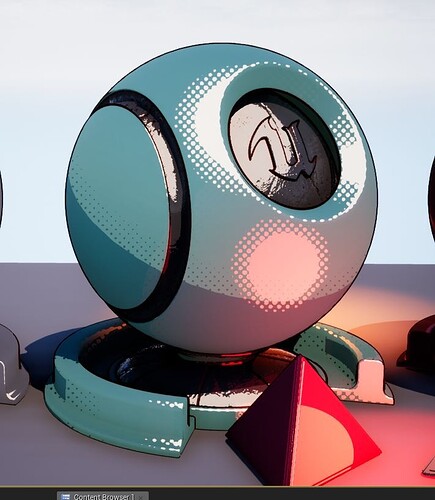 Also, materials have separate controls for specular and diffuse, which I find useful for stylized stuff: 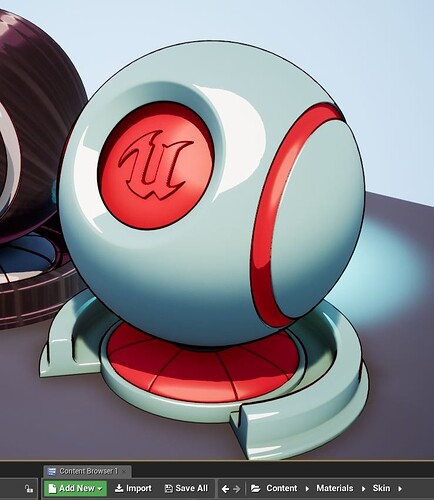 If GBuffers weren’t limited, I could have just made a ubershader with all the features in one shader. Since there’s not many unused GBuffer channels, here’s a couple shading models that (hopefully) cover a wide range of uses, and their controls:

Toon:
General-purpose toon shader. Most control over the shadow and highlight locations.

Skin:
Skin toon shader with an adjustable SSS color. SSS calculation is based on the Subsurface shading model.

Hair:
Based on the built in Hair shading model for Unreal, so it will be fairly similar- though it lacks a Backlit parameter (since we’re out of GBuffers again…). Has dual anisotropic highlights.

Toon Anisotropic:
Anisotropic shader based on this stororokw’s code, but ported to 4.20.

Some of the known issues include:

Also, I couldn’t have done this without these guys’ tutorials paving the way:

@kusogaki77 brought up a couple use cases where being able to fully put a character in shadow or light using the material would be useful, so I extended the range of Offset to allow for this. (thanks!) This is the new range for Offset, note that if you’ve made materials you might need to update your scalar values for offset. if you used a texture to drive offset, I recommend using a Lerp to adjust the range of offset for that texture (I use that on my test cases):

I’ve added some controls for flatter shading for ToonSkin and ToonHair. Note that this changes some pins in the material editor, and will require the engine to be partially rebuilt. Some parameters for ToonSkin might need to be moved around, since SpecularOffset’s pin is moved to another material pin for ToonSkin.

Skin:
Specular Offset and Specular Range are now unlinked and can be controlled separately. Since SpecularRange and SpecularOffset actually share the same GBuffer, SpecularRange only has 5 steps. More info on how the encoding works in a later post. SSSMode is now a switch that allows standard SSS shading or simple SSS shading that only affects the shadow color. Personally I find adding a low emissive value to the entire material or a fresnel helps this mode a little, since the lit areas receives no scattering, but it depends on how much scattering you want to emulate for skin.

Hair:
Roughness now affects the hardness of the specular and surface shadow rendering.

Although I haven’t had time to clone and compile your code, I have simply browsed it.
Your implementation is very comprehensive, the ideas are quite advanced, and the choice of parameters is very elegant. Your understanding of the problem is quite profound.

Therefore, I am very willing to provide the following suggestions, I hope these suggestions can help you. 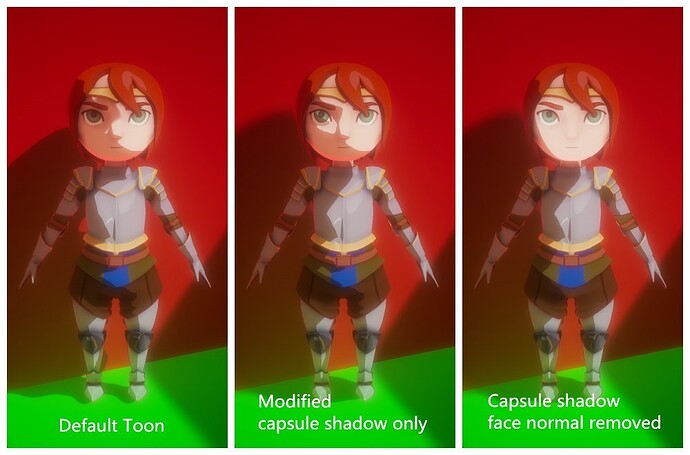 For a long time, I think the main reason for making 2D look like 2D is its motion.No matter how stylized rendered static images are done, as long as they move, they will look like 3D, like this one.http://artineering.io/articles/Art-d…-in-real-time/

This concept has never been broken until I saw this dumplinghttps://skfb.ly/6AHqV
If I can understand why this dumpling can look like 2D even in the rotation, I feel that I have mastered a big secret in stylized rendering.

There are really not many people who care about Toon Shading. Toon shading lacks standards and requires a lot of art experience to control. The need for a lot of art experience means a lot of control, and the problem of insufficient GBuffer is easy to happen.
​​​​
All in all, your implementation is already leading the entire UE4 community, looking forward to your new progress.

@IOchair
Hey IO,
As you mentioned, you added a Custom Material Node to modify normal to reduce the face shadow, I am very interested in that since the project I am doing is also facing the face shadow problem. If you can explain your method to modify the face normal in Engine, I will be very much appreciated. Attached is picture showing the face shadow I currently have for my toon Shaded character.

@IOchair
Hey IO,
As you mentioned, you added a Custom Material Node to modify normal to reduce the face shadow, I am very interested in that since the project I am doing is also facing the face shadow problem. If you can explain your method to modify the face normal in Engine, I will be very much appreciated. Attached is picture showing the face shadow I currently have for my toon Shaded character.

After a few days of attempting to push away the face shadow, I found a quite easy way to achieve a more 2D like effect. I modified the skin material shading mode to subsurface and added an extra direction light which will rotate according to the position of player camera. Since my project is a VR project so this method is quite handy.
I am now trying to understand the reason causing this shading difference, maybe is due to the extra light reflection under subsurface shading mode?

Followings are the pictures comparing the results.

What do I do with this? Using forward renderer and a project upgraded from 4.19 I think to this. I’ll try a fresh one I guess.

Hey all, just wondering if anyone else has had this issue
I’m getting weird shadow lines with the shader, even without textures
The shading also falls apart completely on large objects, getting these polygonal facets
Its interesting that these issues don’t happen at all with the specular highlight
Any ideas why?

Hi! I recently got the toon shader compiled in 4.22, and I was going to do some tests to try and get raytracing to run properly, and for some reason, none of the toon shading is appearing in reflections.

Any idea on a fix?

Is there a way to get uniform flat shadows like the light? The models look great in the light or in half shadow where there’s lots of clean contrast, but in mostly dark areas the model’s geometery is visible dirtying up the shadow

@MithosKuu Have you tried zeroing out ambient occlusion? Just stick a single float into AO and set it to 0.

Well, it sorta works, very Killer7, I tried modifying the Shadow Color parameter to make the shadows something other than pure black but it just washes out the entire character

I’m I going crazy or a lot of replies disappeared? I hope this is not the end of this Branch.

The same as you.I hope they can come back ASAP

I dunno what happened to all the pages, but I noticed the link to the active branch is gone, so here it is for anyone looking
https://github.com/kusogaki77/UnrealEngine

Is there a discord or something where more active conversation takes place? I’m really excited for a potential fork for ue5 down the line

I too would love to follow these convos, a fork starting off early in UE5 sounds pretty dang tasty to me.

This custom solution works perfectly. Thanks so much for this @doomfest and all the other contributors, seriously it works great and I really appreciate you sharing it and all the info online. It has been a great learning experience diving into a custom engine solution for this.

■■■■ our several replies disappeared when ue4 forum changed.
include mine.
anyway How can i import this toon shader for ES3.1 mobile?
kurosaki’s git work perfect but i want android render like genshin game.
anybody know how?

@kusogaki77 sorry sir bump! i want mobile shader! and our comments are disappeared!

I’m still in the middle of moving, and will be for another month or 2, so I won’t be updating the fork any time soon. I definitely plan to, though.

I’m not sure there’s an easy way to get these shaders working on mobile, as mobile simply doesn’t have access to the full array of parameters that these shaders use.

I messaged VictorLerp and Amanda Shade in regards to why so many posts have been removed, and whether they could add them in. We technically could manually add them back by using internet archives I believe, but that would be a lot of tedious work.

The last time this engine was updated, to 4.26.2, was by drydev. After merging the changes I realized all the binaries were included. They should not be. When I have time I will remove the binaries. Lastly, it seems like 4.26.2 was the last update. So after I, or someone removes the binaries and verifies the changes on 4.26.2, I’ll look into adding the toon shader models into 4.27.