Toggling visibility with a material and lights

hey guys, kind of a noob questiong as im new to blueprints in UE4,
I have a lamp post where I have attached an emissive yellow light to the bulb area as well as a spot light and an area light complimenting it, 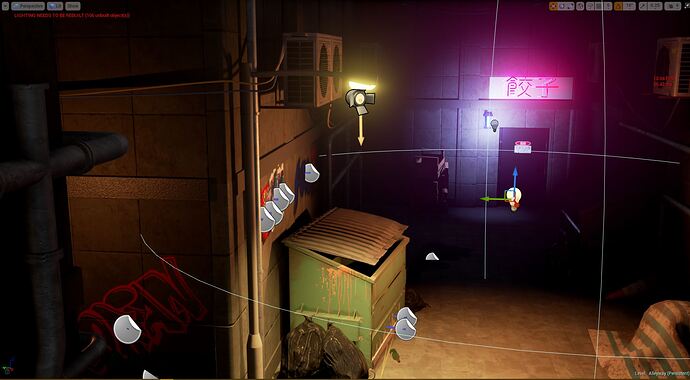 I’ve just learnt how to make flickering lights within the level editor, however it obviously looks weird with the emissive light not being toggled on and off while the lights are flickering. 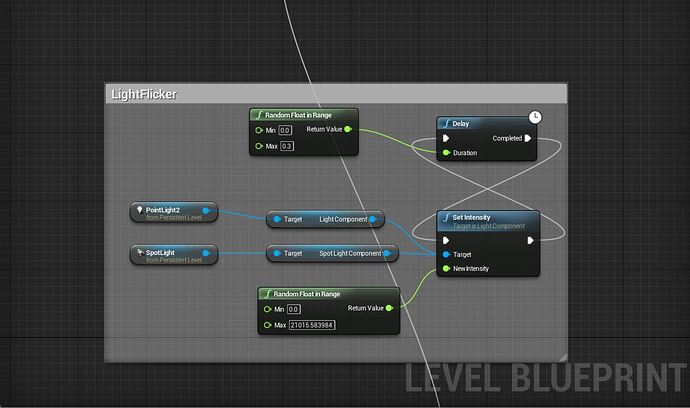 obviously you cant put an object with the “set intensity” node as it doesnt work that way (as far as im aware, it doesnt let me).

So I tried using visibility, I know you can attach lights AND objects to these nodes, 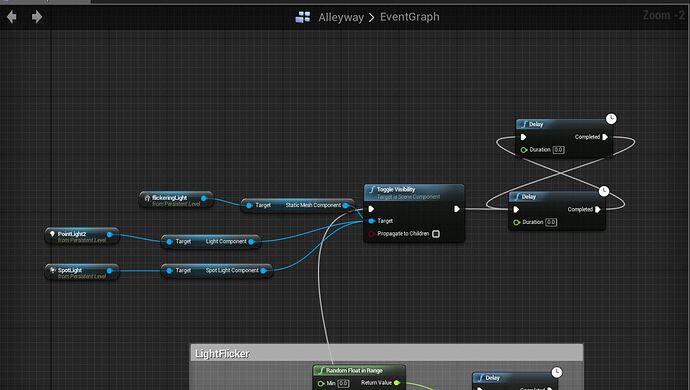 It’s not working out for me, im sure theres something stupid im missing,

I tried setting a timer for the material itself where it turns on and off, but it wasnt snycing with the flickering lights

I have a bunch of suggestions about your blueprint:

Secondly, I don’t see where you link your flickering logic with the rest of your flow in the second screenshot, I assume you’d link that to begin play. Or something that runs once similarly

Thirdly, I remember that there is a repeatable delay, it probably exists for a good reason so you should probably use that instead

For the random numbers: you probably should have flickers happen every 0.5 to 3 seconds and simply set the intensity to 0 instead of changing it to a random number, rapid changes might cancel eachother out as our eyes aggregate frames

You also probably want to have it stay off for at 0.2 seconds if you want people to notice anything, usually flickers in games even have a specific timeline as flickers irl tend to follow a specific pattern, you could do that using a timeline component

Here we use a timeline (you can create one by clicking with RMB in blueprint editor and typing Add timeline) that sets a transition state between current intensity and the last selected one
By changing the length of a timeline you can define how fast lights will flicker. Don’t forget to move the last point to the new length of a timeline when you change its duration though.

Thanks for the advice guys, I’ll get back onto it and adjust