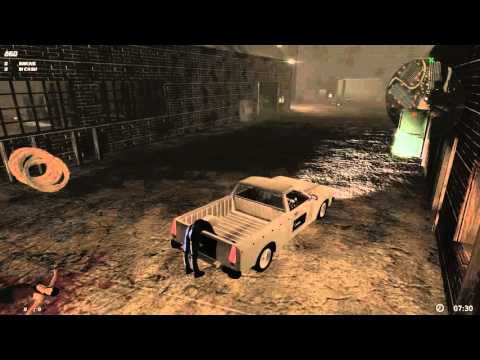 hopefully,the move to these forums will bring a little more interest.its not the best looking zombie game in the world.my main focus has always been on gameplay.

its taken five years to get to this point and it may take a couple more,but this will not become another unfinished UDK zombie game.

I hope you enjoy the vid and see that UDK isn’t quite dead yet.

I like it:), from watching the video it seems kind of a cross between doom and left 4 dead, I may have to keep an eye on this thread;).

Doom and left for dead.2 great games I played to death.i wont deny the influences.

thanks CobaltUDK,I do love making vehicles.Sadly,my latest,the ac-130 is just too big for this relatively small level.i need my 10kx10k map for it to look right.

I saw the ac-130 video and like a lot. Reminds to me to the ships from Star Citizen, as you can enter and move in the interior.

it would be nice if there where some points to recover or some background history :P… or a point to get there

there is a link to the original thread right at the top of this thread,it contains a lot of the games development history.

the actual game story line from the other thread has been ditched,i had a lot of problems getting it all to hook up after I added the save game systems.a new story line will be added in due time,but im going to perfect the gameplay mechanics first.

the biggest problem I had with further development has been solved,building the paths was taking 27 hours(I had 7500 of them)with only 3/4 of the map covered.i can now build paths with almost 10000 custom pathnodes in around 15 minutes with the entire map covered.but,the extra 2500 nodes has come with a performance hit of almost 15 fps in some areas.so at the moment im working flat out to solve this.

Various weapons and equipments are impressive.
I like a chainsaw and a parachute. -_-

this updates been a while in coming but ive spent a lot of time converting kismet stuff to script and I broke a few things along the way.but ive got most of it sorted now.

ive redone all the menus and added a weapon and abilities shop.still some work to do there.you collect money for weapons around the map and from killing zombies and collect brains for abilities.

there are several new areas outside the factory to explore,a farm and a church and graveyard,not seen in this vid though.

you can now repair and modify the vehicles in the scrap yard,also not in the vid.you can now also pick up things with the forklift truck.

one last thing,i had been limited to 20 zombies a mutant,spider and dog.any more than that and performance would drop too much.10000 pathnodes will do that to the ai.so I have been working flat out to improve on that.there is now a new class of zombie,i call them rotters,to go along side the others.currently you can have up to 100 of these at a cost of between 10 and 15 fps.these rotters do not use pathnodes but only chase and attack when you are close.im working on a system to allow for more of these and also reducing the amount of pathnodes.my aim is no more than 2000.im still working on the ai for these zombies,as you will see in the vid as the zombies that do use pathnodes goto the pathnode where they first see you before coming for you. 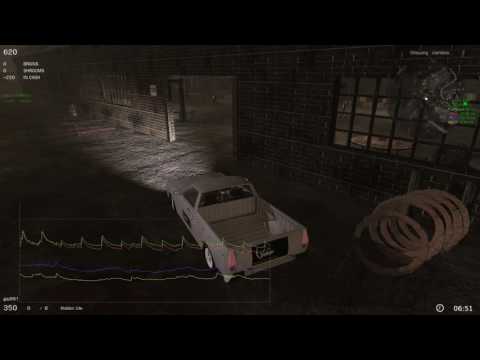 What are producing these peaks in the game stats? Seems that destroy the framerate peace.

unsure.it is the rotters,but the 1 second interval does not correlate to any timings within the controller.i have tried altering the timings but it has no effect.

changing the mesh to a sub 600 poly mesh has no effect and neither does changing the spawn rate to try and offset the peak.

Try with the GamePlay profiler, is good for this things. The “spawn time” event in the profiler was the cause of my peaks, each time that a foliage ring was spawned, seems that the engine does a lot of traces when spawning something, even with the no collision test during spawning disabled.

nice tip.ive never used it before and from an initial check it seems its the utgfxteamhudwrapper.or more specifically,utgamereplicationinfo.sortpri within uthudbase.

I will do further checks but I guess 100 dynamic actors might be enough to cause it.i probably wasn’t going to include zombies on the map in the final game anyway.

Great progress Gaz, you’re really getting to grips with coding. The Bolton area is certainly developing along with your menus, wow.

Pathnodes, as I’ve said I’ve always used them sparingly and had no problems. But 99.9% of the maps I’ve seen lather them on, even pros. If they use 1000 nodes I can get away with 200 and do the same thing. Maybe it’s my testing methods. I play test maps thoroughly - notice where I’m drawn too defend and work out AI access problems. I shift nodes around - resentfully I’ll sometimes add another single node, even two XD. Dunno, but my 1000/200 ratio isn’t an idle boast.

UDK pathing is somewhat different to UT2004 -lacks ForcedPaths- I think Jumpspots may do similar(wip - you name a pathnode to jump up to). Besides nodes/navs there’s RangedAttack and PlayerSeen etc found in UT’s AI code - so that pathnodes are only a rough guide - I hope you remember that. Nodes are naturally more specfic for doors and entrances. But into a room it should be only 1 outside, 1 in the middle of the room. For other entrances / exits, then line the middle one up(or resentfully add another node:p).

Using Navmesh or pathnode - either/or - I couldn’t get the two working together - maybe on door/Kismet blocked Path stuff it’s different, dunno haven’t tried NavMeshes with those. But the problems for bots are identical whether I’ve used nodes or NavMeshes. If the map has a bottleneck area bots will funnel into it, they won’t flank. Flank has to be hard coded - although the cost factor of individual nodes is a possible option, but the cost option is unique to each bottleneck area. Yeah I know nodes so I work with them. Personally I find nodes less irritating. UE4 will be entirely different, but the irony is it will have identical problems because it’s trying to do exactly the same things

The Boltons is becoming an epic saga, n1 Gaz!

its all down to the ai.my previous one extended utbot and a the new ones extend GameAIController.so now they don’t run to the initial pathnode where they saw you.which when your enemy has no weapon just looks very wrong.

ive got the pathnodes down to 900 and its working pretty well.im going to go the full hog and see how many more I can eliminate with just better positioning.its marvellous that I can build paths in 3 mins rather than the original 27 hours or more recent 15 mins with custom pathnodes.

and thanks for constantly nudging me in the right direction.

Phew thanks, I thought you may get ratty with me for being pushy. I’m only trying to help but pushiness can get irritating.

I’ve extended mine from UDKBot. My civilian bots were having problems with minor slopes. They’d stand vibrating in the up direction, wanting to go up. I was thinking stepHeight; tell them to find another node kind of solutions etc etc. But working on something unrelated I dropped in my only monster so far and it ran up down and all over. The monster also extends UDKBot, but the civilians’ Roaming code I’d heavily modified… er… I hadn’t actually understood States. Now I do - what a genius of ingenuity they are, lol(at myself). Realising that States are like mini .uc files led me immediately to fixed stacks of other problems, like breaking State WeaponReload - so the player isn’t stuck reloading when a monster’s charging - I added TryPutDown() to State Reloading and problem solved! The Civs problem was just that - added some movearound types of code into the Roaming State (after studying UTBot and other sources including your helpful source!) and off the bots went np.

Although with bots I had liked to think FindPathToward was the most useful and I kicked out MoveTowards but the bots just stood there. It’s a WIP - currently watching/reading tutorials on coding. Backwards method I guess - I have a go then learn what I need to make it work. I’d honestly like to be a copy paste coder but NOTHING is ever paste and run, because I want it the way I want it. Learning code has been my only option.

Your game has an atmosphere of menace. And love the helicopter drop beginning. Darn it<-I do not mean that puny word -reader has to imagine a decent expletive which sadly are censored! StunGun, I made one too but my electrical effect is more like that of UT3 vehicles’ EMP disabled.

As for lag in your game, you’re of course using Massive LOD? That gives absolutely massive frame boosts, no kidding. I don’t think UE4 has massive LOD yet.

I’m gob-smacked just how many good games you lot are doing!! This is great… very atmospheric and I love the helicopter intro. It’s daunting though, you tend to take games for granted, without realising the amount of time, effort and knowledge that goes into it… That sort of comes across when you see something created by an individual or a few guys… Well done mate!

blood,sweat and tears along with patience and determination are the recipe for a solo dev.you stop taking games for granted when you’ve had a go at it.

ive had to reign this one in a bit,it was starting to get too big for me on my own.the problem is that the more you learn the more you want to put in to the game and before you know it another year has passed.

Yeh I’m starting to realise. I remember when I worked for a paper in Scarborough, someone brought in a big bag of flower and it got trashed by a news trolley because the guy had put it down in a narrow alley way, it was summer and the fans were on and got blown every where. It only took an afternoon to clear 95% of it up… the other 5% took 3 months! Anyway I’m uploading some stuff like textures and foliage models and the trees I’ve made. The textures are there now. Theres a link in the post ‘textures for ya’… It might take a bit of weight off, say 0.005%. I’ve got some pretty neat steam engine parts I made for a museum (voluntary) a couple of months ago that got me into this. They’re sat around doing nothing as they said it was good but they wanted one for Unity! I’ll stick that on google drive as well with facade of the building if you want. they’re sort of industrial grunge so might sit in for you…

Here’s a link you might find them useful even if for the components that make it up piping etc;… you can say it’s an oojimaflip that attaches to the thingamy jig!
https://drive.google.com/open?id=0BzJuTb9mqBugNlNLV3lqdjJaZGc
I’ll post the plants on the main page…

The package didn’t get backed-up when I reinstalled the other week. all the FBX’s are there for the engine and there’s some more bits here…

when can i play this delicious UDK game :p?