I’m trying to create a HITMAN like object selection system in third person. So far I set up blueprints for items I want to interact with that include a trigger to detect when the player is close enough. When that happens, a little “pip” shows up that will show the user it’s interactable. My plan next is to hover over the object’s mesh with an invisible crosshair, from then a ui hint would appear to show the user how to interact. Currently, I can only get this to work with the mouse cursor, and not a point in screenspace. I’d like the interaction hint to show when I hover over the mesh, and disappear once I move off.

I originally tried to set my mouse position every tick while inside that trigger and hide the cursor on mouse hover events within the interactable object, but I get very ugly flickering. Here is my interactable blueprints : 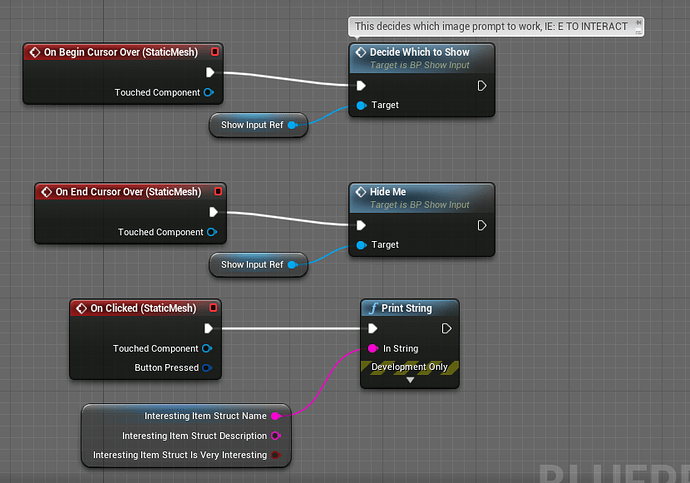 It does work properly when the mouse cursor is visible, any ideas? Thanks!

My plan next is to hover over the object’s mesh with an invisible crosshair, from then a ui hint would appear to show the user how to interact. Currently, I can only get this to work with the mouse cursor, and not a point in screenspace. I’d like the interaction hint to show when I hover over the mesh, and disappear once I move off.

This bit quite confusing - especially the invisible crosshair part. I still don’t understand whether we want to do it with the mouse or not.

My apologies if it’s confusing!

Meh. People demonize Tick because folks tend to place things there that do not belong. If you want to see an update every frame, you Tick it. Or you have it ticked behind the scenes by something else.

Line Tracing to figure out where the character is looking does belong in Tick, imho. And I hereby challenge anyone who disagrees to a pillow fight.

My backwards way of using the mouse cursor was to force it to the middle of the screen every frame to “act” as a line trace.

See - you’re even doing things every frame here - which I’m almost sure is more computentially demanding than line tracing. I gotta say, this is actually an interesting hack…

good point! I’m new to blueprints, coming from Unity it’s quite the change but i’m grasping it quite quickly.

the “hack” works perfectly well except for endoverlap events, it flickers on and off, so i’m assuming setting the mouse position every frame triggers a slew of overlap events. I’ll give linetrace another go and report back!

the “hack” works perfectly well except for endoverlap events, it flickers on and off, so i’m assuming setting the mouse position every frame triggers a slew of overlap events.

You could try add a retriggerable delay node with > 1 second duration after Decide Which to Show node in the overlap event that executes the Hide Me node when time runs out and delete the on End Cursos Over event. You’ll need this if you are going to use trace anyways.

I’ll give linetrace another go and report back!

Do tell how it goes. This can be set up with very little ticking, actually. You could even line trace just a couple of times per second, and the player wouldn’t notice. But this particular ticking is something I wouldn’t worry about.

@ConvenientBox How close is this to what you’re trying to accomplish?

You could add a capsule collision component that extends from the camera out to a specified distance. Have it only overlap your interactable actors. As long as it is overlapping it will display your message. On end overlap it disables.

This relies on you being close enough and centering focus (crosshair/center screen).

@Everynone This is EXACTLY what i’m trying to accomplish! I’ve managed to get it working like in your example, but i’m having trouble hiding the prompt when the line trace stops hitting the item.

This is method I tried but failed, though truthfully I was so tripped up on my original attempt not working that I gave up. I’ll definitely give it another go. thanks!

what’s your approach to the text?

I have a widget that appears in screen space that shows up whenever the player actor overlaps a trigger on the item. Inside the widget is some code that takes in a variable for whichever action I have assigned to “interact” and decides to show either a pc or gamepad input.

The communication in the example revolves around Inheritance + Interface - a potent combo, imho. 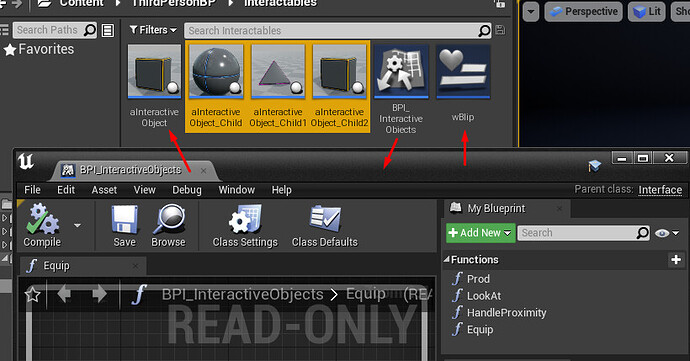 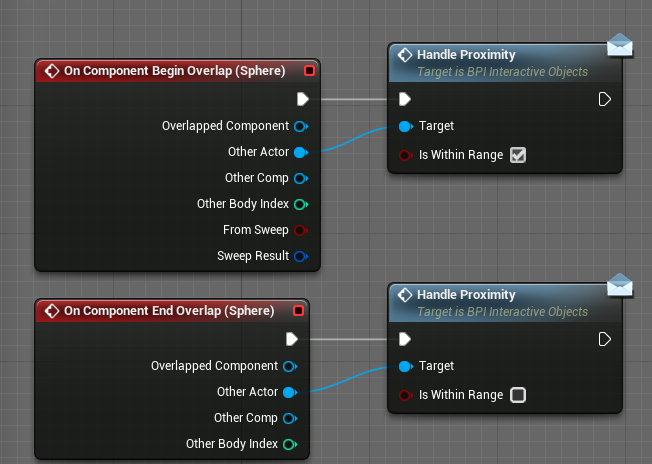 Above, handling in the target shows / hides its widget component.

Above, the widget updates its look after receiving a propagated interface message.

The logic is set up in such a way that it does not Tick the whole thing, it sends a single message when needed:

This can be optimised further, ofc - Gate tracing to execute only if there is something in Proximity.

what’s your approach to the text?

Noticed something uncanny, eh? It’s a Widget Component in Screen Space but the gimmick is that it’s attached with a Springarm with Absolute Rotation. 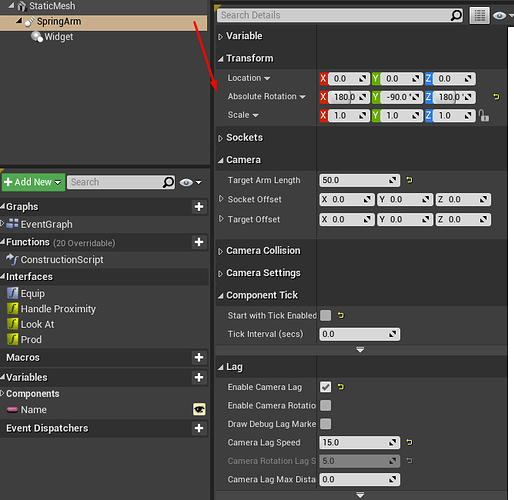 Reasoning : it makes it trivial to offset in Z (even when things tumble around) and a bit of interpolation the camera lag produces makes the text easier to read when the owning actor is on the move. Feels really easy for the (my) eyes to track. If I were serious about this, I’d probably just place the component at the end of a local vector rather than use the expensive springarm - but it’s more fun this way.

It also makes any sudden changes of velocity appear more impactful as there is now a better point of reference. It might as well be a love / hate thing tbh, or utterly useless - depends on the purpose. Not sure whether it’s of any use for serious stuff. Definitely gives off a whimsical-cartoony vibe.

I’m honestly beyond words with this post, thank you so much for the explanation and file!!!

I’m currently going through it!