WHAT
Ray Davis, Nick Whiting and Nick Donaldson join Chance and Alexander on the livestream to discuss the creation of the new Bullet Train VR experience. We’ll be digging into what it takes to develop an interactive and immersive VR project, so come join us! I have a question. When do we get to play with it? :inf:

what color is ur mum

Great, been looking forward to this.
I have a couple of questions if I may:

Had a lot of fun playing through this at OC2.

Can I play it on my trip there?

Security camera displays, portals and fake reflections can be done with a Scene Capture 2D. How would your recommend making this technique work in VR and not look flat? Any alternatives? Thanks!

+1 for that, can think of plenty occasions to use such a transition

How many realtime lights do you have in the scene. Are you using Lightmass Character Indirect light volume technique like the showdown?

Have you used monoscopic rendering for the background elements in this game, or researched into it?

What about Motion Sicknes? This is a very serious issue :S

In the QA session of this video, 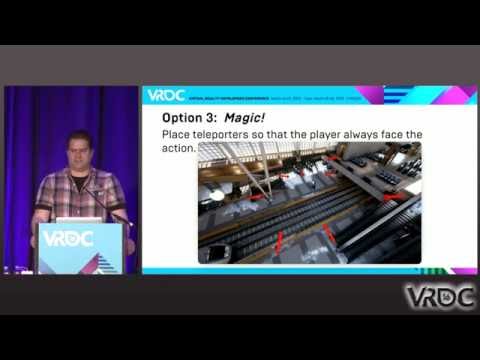 some guy raised a question about the jitter of the motion controllers. I think Whiting mentioned Kalman filter, but what’s the name of the other filter he mentioned? And I don’t quite understand Donaldson’s solution. Wish somebody can give me some hint.