I’ve been testing with blender + ue4 (i’m totally new on modeling, game dev, etc.).
Here es one of lot of questions i have. I’ve done a test model of a block for creating a sidescroller level, but there is some strange with the texture, on the middle rock, there are some hanging “plants”, that triangles, should be green, but i don’t know why in UE4 they takes the dirt texture and not the green one. It’s seems to be ok in blender.
I did the model, just marked a seam, unwrapped, hand painted, created a second UV channel for lightmap, and exported.
What i’m doing worng? 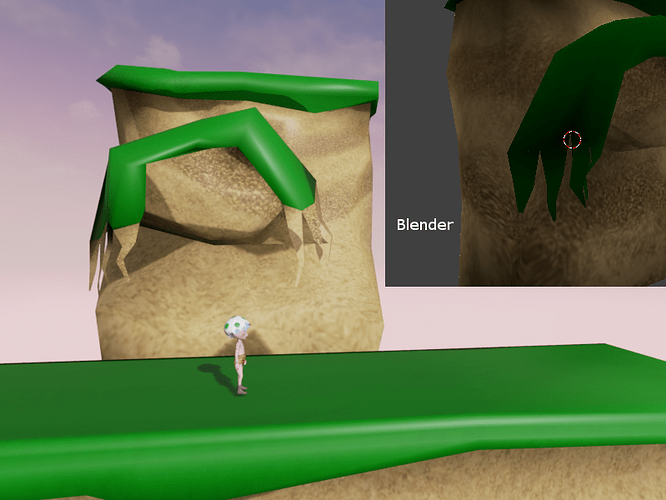 Ok, i’ve found the problem.
I don’t know why, but when i import a new mesh (having checked “Import Materials” and “Import Textures”), UE4 only imports the mesh, without mat/textures, but in the same folder, there is the MAT/Texture for another level piece, and UE4 assigned that mat/textre to the new imported mesh.
Strange…
I’ve create a material in UE4, imported manually the diffuse map file created with blender, and assigned the mat to the mesh. It’s ok now.