Textures are fighting on Static Meshes converted from BSP

I’m building a large level in UE4 and currently whiteboxing the play space in BSP. As per advice, I’ve taken specific play spaces and converted them in static meshes, which breaks the lighting maps. So I import the mesh into 3DS max then re-import it back to UE4. It fixed the initial problem, but now I have two new ones:

Picture below of both issues in editor: 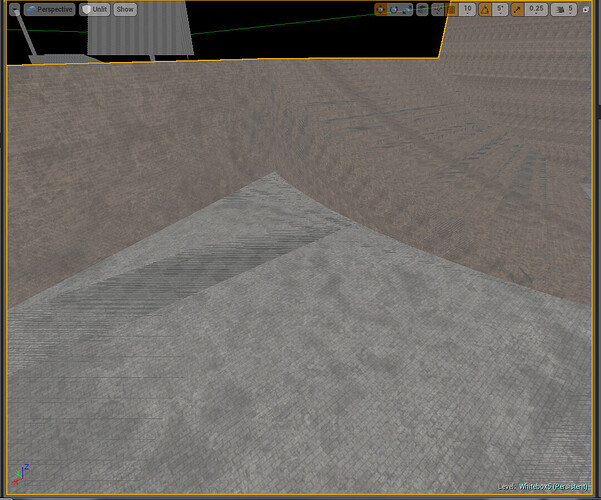 Z-Fighting is always caused by geometry overlapping and the CPU trying to render. You may have an inverted vertex which has created an inverted triangle along your mesh. But let me ask a few beginning questions as well: Are you using any subtraction BSPs which have not been deleted from the map after reimporting the converted BSPs? Could you also clarify what you mean in Question number 1?

Hmm…After building geometry and restarting the editor, the z-fighting issue went away.

The other question is that I have a static mesh made from BSP, the image above. If I place a red-brick material on the wall, it adds it to the stairs as well. If I add a white mat to the floor, it adds it to other specific faces too.

Are the stairs and the walls a part of the same Static mesh?

So if they are the same Mesh they will also share an unwrap and material and since both your walls and stairs are the same mesh they can only accept one material, unless you go into a modeling program and separate out the meshes or assign the mesh a multi-sub object material setup.