The default technique of rendering terrain by blending layers on the terrain geometry is limiting for performance and especially when trying to blend it with static meshes for smooth transitions.

The solution I’m thinking about is: Render the terrain to a series of textures with decreasing density centered around the camera (similar to cascading shadow maps), these textures would then contain the blended terrain textures and could be used by any mesh including the terrain and static meshes at a very low cost.
Since the terrain doesn’t change from frame to frame the terrain textures would only need to be partially updated every time the camera moves further than a certain threshold, additionally updates could be distributed across multiple frames.
Far distance terrain should be precomputed at the height maps density.
Example image of what I mean by terrain cascades: 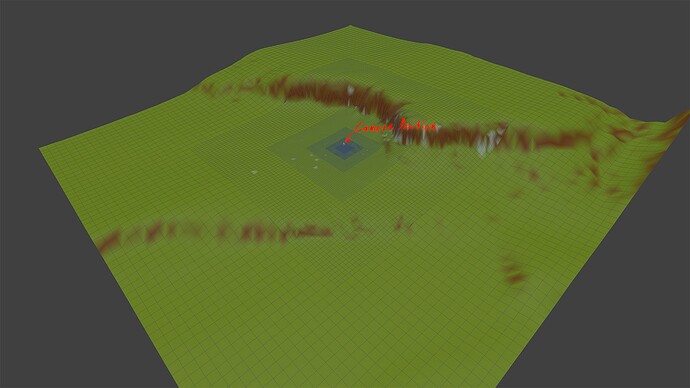 terrain_cascades_visualization.jpg1600×900 177 KB
Selecting the correct terrain texture LOD to use for blending and it’s UV coordinates should be possible to handle through dynamic branching in the shader at fairly low cost since it can be expected that most neighboring pixels will end up using the same terrain texture LOD (dynamic branching currently requires a custom HLSL node in the material, but at least it’s not a complex one).

Conceptually the system above should be possible to create with unreal engine as is without the need to modify any of unreals source code.
There are a few optimizations about which I’m not sure whether they are possible as is:

I would like to know whether anyone has tried that kind of system before or if you can point out any obvious issues with what I’m describing. One drawback I’m aware of is that triplanar mapping won’t work with that kind of system, but on the other hand using static meshes to cover steep terrain will be much easier. Another is that it obviously takes up additional memory but I think it’s manageable (memory cost and performance could be adjusted by changing the base resolution and the scaling factor between the LODs).
I will try to get a basic prototype of this running in the next weeks (as soon as I find time for it) and report back on my results.

PS: The ability to conveniently create a height map from the terrain is already a huge help as the height map alone is already useful for many things, like terrain conforming tree roots and shore lines for opaque water.

To me it looks like a case, where cure is worse than disease. It is quite monstrous system for a small visual benefit it brings. It defies the purpose of its own existence by the fact, that you can’t implement it in the stock engine efficiently and if you reach for customization, it instantly becomes obsolete as you can just use texture arrays and fixed layers per pixel count for landscape texturing and consequently blending objects.