Target Dummy Needs to Ragdoll (with impulse) when hit

For reference, I’m using the FPS template with a few tweaks to the projectile system (removed gravity on the projectile itself and allows it to bounce off non-physics enabled objects and destroy itself on impact after hitting a physics object or 4 non physics) – Maybe I should just put the BP up 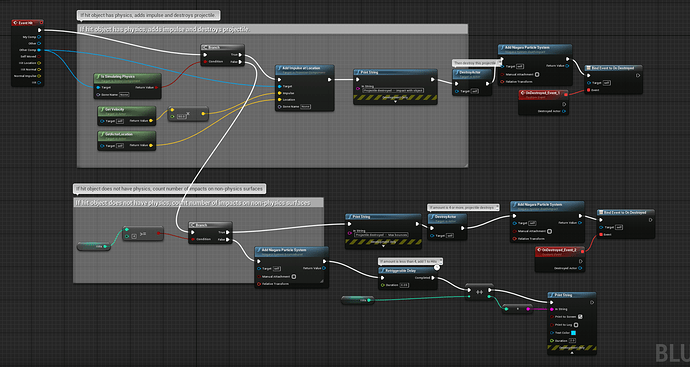 A target dummy (preferably something like the SK_Mannequin) that will stand upright or idle in animation until hit, at which point ragdoll will enable, impulse will be added to the mesh, and the projectile will self-destruct.

I’ve been able to kind of make this work by adding on event hit >> set simulate physics “on”, which makes the dummy ragdoll after impact, but it just flops over. Haven’t been able to get the thing to accept impulse from the projectile.

My guess would be you do not apply enough force… try scaling the impulse by the mass of the ragdoll. Also, I wouldnot apply the force to component but to the whole actor (“other” pin of your hit node should get you the actor). also have a look at “set all bodies below simulate physics” which should give you nice ragdoll results on a skeletal mesh

TLDR my nodes were bad and I felt bad. My dummy now Ragdolls only on a collision after the “bounce” variable on the colliding projectile is above zero.