So as i understand it, SWARM will generate the Lightmaps on one PC or on PC’s in the same Network. My colleague and i are living in different Citys. How could we set it up, that it works over the Internet ? Hamachi was the first thing that came into my Head, because it’s emulates a Network over the internet. But i heard that the Speed would suck.

Another Question: What Part of the PC is the most important for the Build Process ? I guess RAM ? Atm i have 16GB, is taht enough ? Should i go for 32 ?

Regarding swarm over the internet: before another computer can help with the lighting rebuild the scene has to be transferred. At the end, the results also have to be send back. Regardless of the VPN technology you use, this is quite a bit of data so it can take a while to transfer over the internet. This usually means that it isn’t worth it. Then again, when you both have fiber or some other fast connection it might be worth it. Just try it out and you’ll see soon enough whether it is an advantage or not.

Regarding hardware: the amount of RAM totally depends on the scene complexity, but lightmass does tend to eat up quite a bit. However, when you have enough there is no point in adding more to your system, that won’t make any difference in speed. The actual lighting calculation is done on the CPU, so as long as you have enough RAM for the scene that’s the most important factor in determining the speed.

is this enough Speed ?

As for the Hardware:

Do you guys have an idea about how ram is used. Let’s say you have 32gb on your main pc and 8gb on your render node and the project is very big. Does the render node also need 32gb (ideally)… will it throttle down the whole build time?

Atm i only have a 6mbit/s connection. But hey it works :). 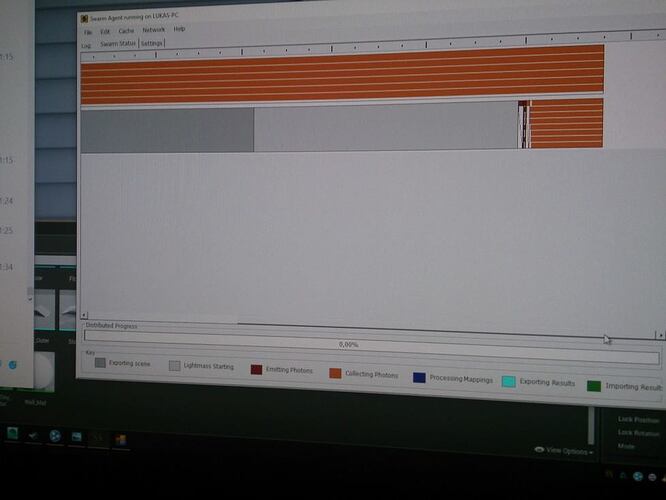 No idea how much will be used. We have to test it :-P.
but in the mean time there is a other (problem?). Would be awesome if somebody could check it out here.
Maybe it isn’t a Problem. Because 1.) we saved about 15minutes in rendering and 2.) everything was baked correctly.

maybe somebody could help ?