Hey guys, I want to show you the project we’ve been working on (mostly) this year. Supersolar is a top-down “isometric” action game with dungeon crawling and space shooter elements, set in a sci-fi setting in space, with a customizable ship (load it out with weapons and gear).

I’m working on art and design, Mike is doing blueprints programming, and enryoki provides the music. We’re still in very early development and working on an advanced demo to show, and I’m looking for all the feedback I can get!

Thanks for viewing! Going to post regular updates here

@navid100 Thanks!
[USER=“270104”]Roi Danton[/USER] Thanks a lot. We’re using custom shooting and movement mechanics and character movement instead of using physics based movement.

For the next few weeks, working on an expanded demo and new level:

This looks amazing!! Will you be able to move up and down on the Z axis?

Hey. Fantastic looking work! I think your game has a lot of great potential.

Here’s a quick game design addition that came to mind: Back on NES there was a game called Blaster Master. I can see your style of gameplay potentially working really well with the idea of being able to land in certain areas and walk around outside as the pilot, but not have the camera change. Just a potential thought if extra gameplay is necessary.

Thanks a lot guys!

@StevenWaltherMedia Yes, in the future I was thinking of doing ramps, “stairs” and elevators that you can go over with your ship and climb automatically. And when this happens, engines will power up to show moving vertically. We can make multi-floor levels like this and it’d be cool to explore them.

@Mordecai Thanks a lot for the suggestion! We were thinking of something similar - the way the ship is made you can control different parts and systems of it. So, opening cockpit and ejecting is possible. The pilot can either walk out or eject and control something like a flying powered seat.

Changing paintjobs and customizing the ship is also planned:

The ship’s UI is made of holographic elements showing the power level and ammo of the 5 weapons, HP, and can flash important messages or status icons:

This is one of the bosses: a robo space squid with multiple attacks, including grappling the ship: 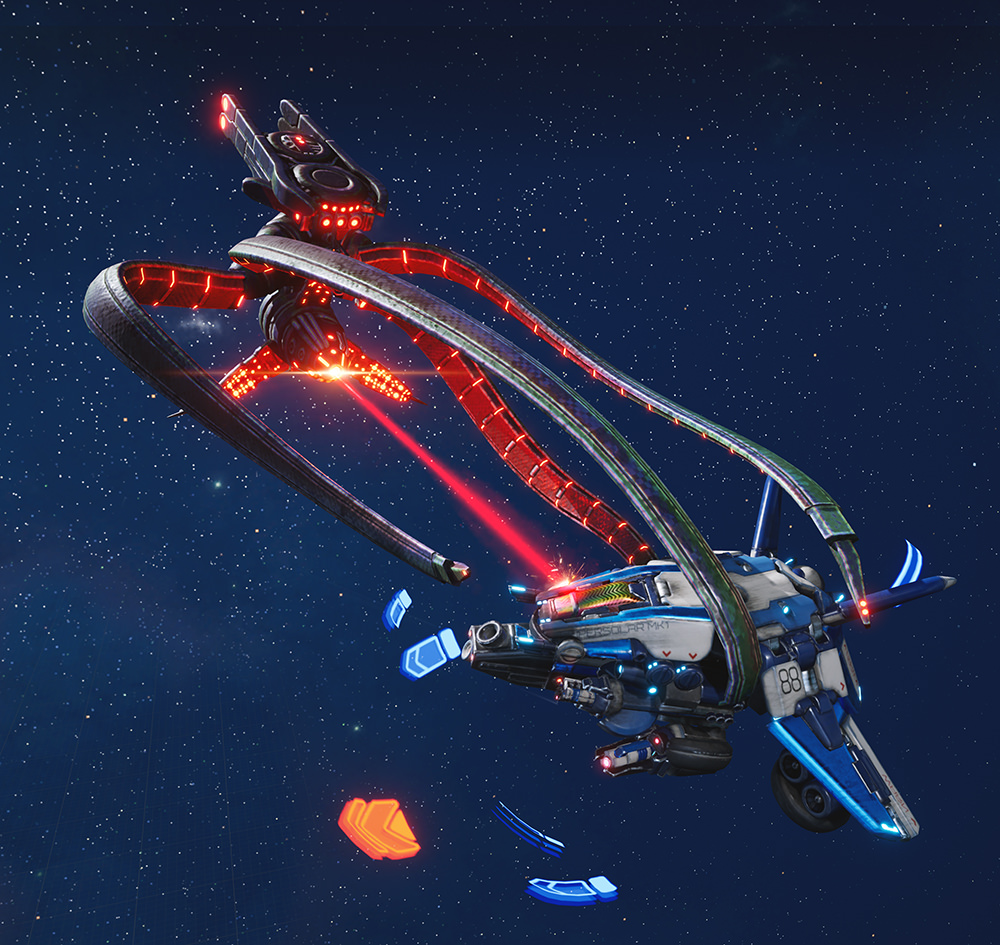 We might do hit reactions for the enemies in the future.

Whelp, this looks awsome. I’ll buy your game day 1 if you can finish it. Very very good cinematics too, so much talent I see you guys doing well.

@huffeh Thanks for your informative replies! So you’re using animations when turning instead of applying forces to bone(s) (in the pictures you’ve posted, it looks like the latter)?

The game would need more enemies variety with their own behaviour patterns.

@MikeRPG Haha thanks I hope we can do it - so far it’s been a really hard ride.

@Galeon Thanks - don’t worry, there are a lot of varieties planned - first up is smaller drones that do not shoot, but instead try to get close to the player and “stick” to the ship to damage it. Then we have armored/shielded/elite variants of the drones. I hope the changes won’t be just cosmetic/stats change but we can get them to actually be smarter in their behaviour.

Added text popups to interact with the environment (still WIP):

Started texturing the first modular kit in the level: