Are you trying to get the “animation” or the “mechanic”? Because the mechanic is pretty simple, you can use something like “predict projectile path” which will return an array of positions in an arc you can use to “lerp” between. If you mean the animation, I have no clue…I don’t do animations haha

Can someone please help, I’m trying to create a superjump for my wolf character similier to the blood omen 2 game but I havent been able to find any info at all online.

(hopefully the video posted) But this is what I'm trying to get, I have looked up projectile trajectory and spline movements and every variation of jumping i can think of and found nothing to help. So would be greatfull if someone here might know how i can do this.
kmaster30 August 27, 2018, 8:18pm #3

Precise Jump Trajectoy System PLUS Spider Jump Montage! - YouTube this is another example.

The animations should be easy enough since its a kinda jump i could just use the jumping animations and “is Falling” booleans to it. but its the mechanic of the jump I just cant work out. for example hold down the Jump button and then get that jump arc that i can then move around to determine where i land and release the jump button and my wolf jumps to that spot, (also making sure its a flat surface so i dont jump onto the wall lol)

Like I said try using the predict projectile path node. It will give you an arc with points you can lerp your character through. I have a tutorial using that node to launch a grenade with the location of the landing highlighted. I create the arc path on release for a visual effect but I’m sure you can modify it to be present before hand. It is not exactly what you are doing but it will get you on the right path.

Watch the end of this video and you will see what I mean. The one after it I create the arc path affect. Cool, let me know if you get stuck. Pretty sure we can figure this mechanic out.

No good. the tracer doesnt move forward, the jump isnt enhanced and doesnt go to the predicted path.

What happens? And what is your setup? You have to remember this was designed to spawn a grenade and it uses a hidden billboard that rotates its pitch to change the trajectory of the arc. Since you will be moving your actual character things will have to be setup a little differently. But if you followed the tutorial you should at least have gotten a similar result with the tracer so I’m curious to see what the difference is. 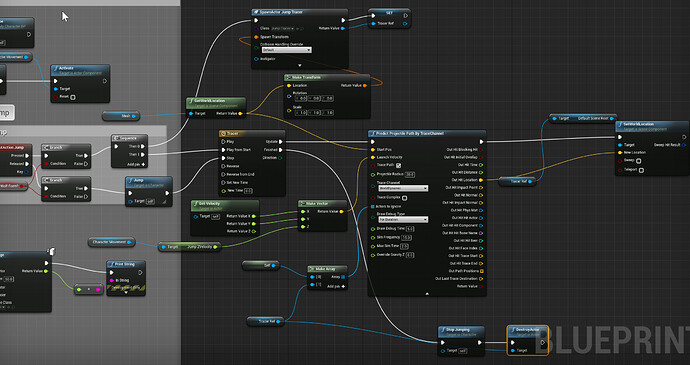 thats how i tried setting it up, but i just cant figure out how to get this, any reference of predictable path is all based on projectiles. there is nothing at all on character movement to even get an idea for a reference lol

I will have to get back to you on this later since you are going to need some re-working of this script. Off the bat I can tell you the “character jump Z velocity” isn’t going to get you very far that value is likely way to small for a “super jump”. You need to be “launched” when you release the jump button. Second, since this is an Action Mapping, it only fires once, so the timeline will execute once and all your values are “static” (player location and velocity) so the tracer location wouldn’t “move” since there is no way to have a “partial” jump with this implementation thus there is nothing to “update”. You need to be able to change the launch velocity or angle to get a different arc path.

lol yea i figured i was way off the mark, but after three days of searching, 4 help requests on ue4 forums and another on youtube, my brain has burnt out on what to even try googling anymore for this lol

Haha, I got you. I will see if I can’t get something together for you later tonight.

thanks mate i appreciate it

So it is 1 AM here, but this is what I have for you. It is not a finished thing yet, not sure how best to go about making the “arc” visible prior to the jump at the moment but I did manage to make the player character jump to his death in a lovely arc haha 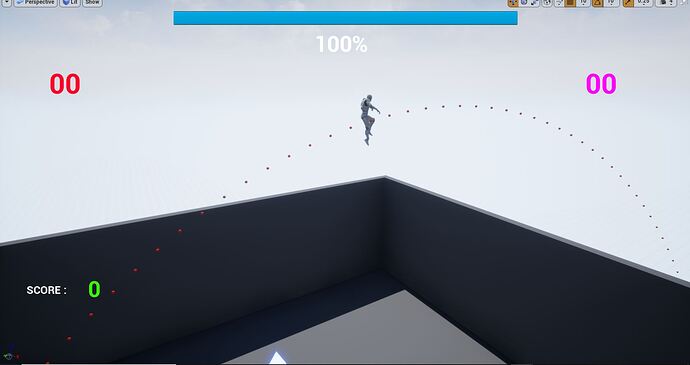 oh the visible arc before the jump would be nice but its not essential as the jump mechanic itself. just so long as i can set the landing point for my character on platforms across, below and abit higher up.

huge thanks for the help mate, i cant wait to see the result.

So here it is, I got it working. It was basically the same set-up I had for the grenade tutorial only difference was using the “player” for positioning and launch velocity etc. Also I used the node “launch character” and used the velocity I plugged into the “predict projectile path” for the velocity component of the launch node. Here are screen shots of what it looks like with the player character. 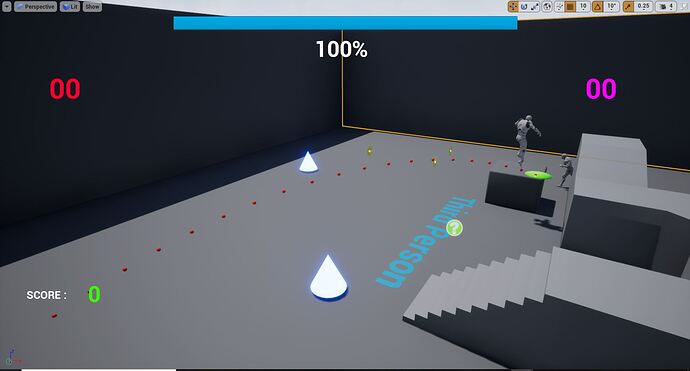 can i get a pic of the blueprints mate?

Working on that now actually haha

Here is how I set it up.