I want to know what is going on here… I have UE4 on my D drive, my project files are all on my D drive, yet whenever I open UE4 it hogs a bunch of my C drive up! I tried loading a game, my computer acted up and was going slow, UE4 crashed. I saw I had NO space left on my C drive! I clear up some space, get it to about 800 MB, reopen a project, crashes again! Now my C drive is down to about 15 mb! and now it’s fluctuating around 8-10 mb… but WHERE ARE MY 800 MB THAT UE4 TOOK UP!?! Where is it putting data and what is that data?? EVERYTHING SHOULD be and NEEDS to be run off my D drive!! This is seriously ■■■■■■■ me off!

Derived data is cached in %localappdata%\UnrealEngine folder, that’s where the space goes.

You can make a symbolic link to another folder if you want, it’s simple enough to do. With one you can put the derived data where you want. It’s kind of like a shortcut to a folder. https://www.maketecheasier.com/creat…nks-windows10/

That doesn’t really solve the “Why can’t i choose where that data gets stored”-problem, though. I think its a big problem that nowadays every program just dumps additional data in the user folder (and possibly even all over the C drive) despite the user having chosen a different location or entirely different drive during the installation because he specifically did NOT want the program to take up C drive space.

When downloading a new engine version you are given the ability to locate the engine version any where you wish. The engine data is not that bad and does not explain by it’s self it’s chewing up you C drive space.

What will suck up storage space on an SSD drive is where the asset vault is located. By default the launcher will locate it on your C drive so all of you downloaded goodies is taking up all of your space and not the engine versions.

To solve it and as you said put stuff where you want it launch the launcher and under settings change the location of the Vault. Once done you should be able to move the vault from your C drive and delete it.
.

I think Stefan you should complain to microsoft about that. Microsoft made that very convulted system for storing user data, they change it with every new windows and keep backward compatibility. With new UAC thingy that is security protection windows style it only annoys users and programmers and its child’s play to circumvent it (if you do not care about stability of your code like malware authors). You see there are probably reasons epic uses what microsoft recommends, and ms recommends user data folder. So here i rather blame microsoft, epic coders just follow guidelines for your system. Only real solution is to get bigger SSD for system.

I also hate when my PC knows better what i want to do, like being stubborn with storing huge stuff on drive C, or preventing me from saving on C:\ while every other app can do it, or changing how folder attributes behave so some older apps refuse to work on win 10 properly. There is a lot of stuff like that.

For what’s worth, if you somebody use SSD and store all important assets in the synced cloud and project’s repository (what anybody should do), there’s no advantage of dividing drive to partitions.

512 GB SSD sounds like a reasonable minimum for creative work, especially if someone would like to play a game sometime

512 GB SSD sounds like a reasonable minimum for creative work, especially if someone would like to play a game sometime

Well that depends on what you consider reasonable as to minimum for creative work. If one is just playing around maybe but for serious work one will need serious storage.

Sure thing, an artist working with photogrammetry or Houdini simulation would gladly accept few terabytes of SSD

open up swarm agent and change the location of your cache folder
every time you build a project it puts the build data in this folder.
the standard location is on C drive and can eat GB of space.
maximum jobs to keep is how many projects will save data
if you build a 6th this is why the first job gets removed to save space
and it removes the data from the first build job this is why you need to recompile shaders if you have not opened a
project in a long time. i have mine set to 5 because i only have 4 projects i work on.
maximum cache size is unknown. i think 10 means 100GB but i could be wrong. I just know
that my cache folder usually sits at the size 100GB I moved it to my F Drive that is an SSD.
i recommend having it on SSD so build times are faster. 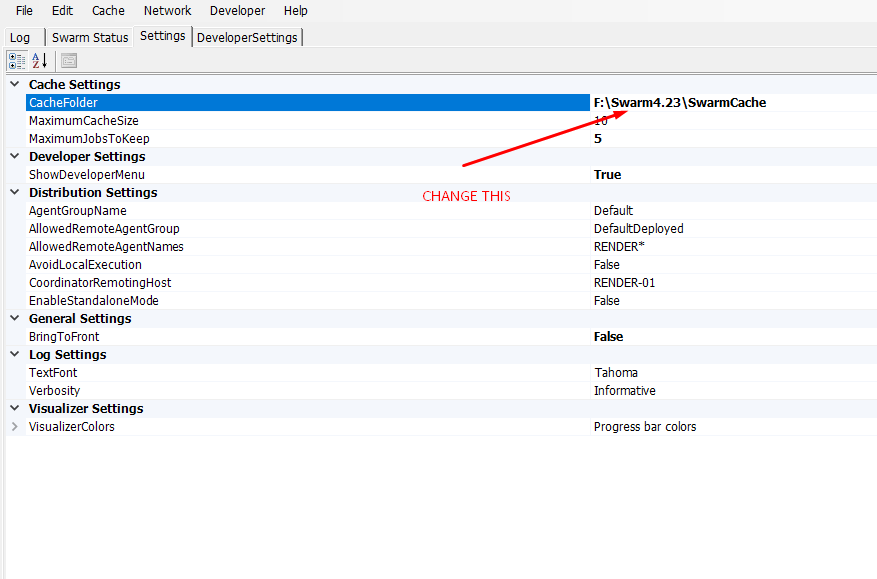 Also do as @FrankieV Said about your VAULT. These are the remaining 2 parts of ue4 that stores data to your C drive.
Make sure you change the SwarmCache folder for each of your projects. open a project, build it for windows 64 or something else and swarm agent will open
or you can go into the folders and find swarm agent exe and run it.

With any GAME development you are going to require a bunch of space, for assets, sounds, built projects, test builds backups and programs for modeling/texturing/retopo and tons of other stuff. I suggest getting as many SSD’s as you can run in your pc. and upgrade your PSU because the more ssd’s/hard drives the more power consumption it will use so hope this helps

This is as unhelpful as possible.

This is as unhelpful as possible.

Really? You think that 250$ for 1 terabyte SSD is too much for indie dev to invest?
You want to have hobby (or serious bushiness) and 250$ is too much?!
And since original post SSD drives got dirt cheap.

refer to my post above. this is how to fix it.

Im in the same boat this is rediculous. We redownloaded the launcher and ue5 into my new 980 pro. set vault and quixel paths to that drive. Yet I need to manually save or load from that drive, the launcher itself cant find anything on that dedicated drive even though all paths are set to it. on top of that I find that quixel is downloading into two paths without it told to. All assets are downloaded to my Z drive, yet ive found a folder on my c drive that has eaten up my last 120gb data.

The compiler and build tools uses the C drive to gulp up heap space to create a limit where it thinks it can operate between. It uses virtual space as memory even if you have ram.
There is nothing you can do except maybe tweek it some how by going over complicated in the engine files to find out how to set limits.

If I have 10 GB left on the drive it will take from it when it loads things up and when it uses build tools.

UE5 is still in beta, however i agree epics launcher is ■■■■.

And btw since orginal post in 2019, SSD storage per byte got really cheap.
Now 4TB ssd is not that big expense.

I know theyre cheap which is why I just bought a 980 pro, but usually when I build a pc I use a smaller M.2 for my operating system, one tb drive for music and audio/protools, and another for games. Ive got a book cover project i’m working on now so I bought this new drive for UE5 and photoshop. Ive created a cache folder on my new drive for epic games and the pathway is set for that drive. It initially put the cache folders on that drive, but between yesterday and today I found out that the cache folder has been put back on my c drive and it has filled up that 120gb left on my c drive. Ive triple checked my cache path and it is still set for the new drive. Im just a bit confused why its not sending the data where it’s labeled to go.

I know that is annoying, and launcher is lazy work (looking at what they can do in engine, launcher looks like some creation of intern working in basement).

Here you guys go, I recently ran into this issue again and found out Unreal was creating a copy of all assets that are directed to being downloaded on my Z drive also still eating data on my C drive here AppData\Roaming\Bridge-Bifrost

It is all fault of those happy and clueless programmers. They just copy/paste, add new layer of ■■■■ instead of slowing down and thinking.

Your choice is bad or worse:
Fight evil software that knows better. Not only unreal, but web browsers, windows all of that is losing settings like “stop autoupdates” “save where i want” (try to fight windows and all those different backward compatibility folders where game do savegame, its all over C drive. So no wonder new and clueless programmers think that is the norm. While fighting you will lose days or weeks trying to turn of that ■■■■ windows update service. This time accumulates, at some point if you did some job of flipping burgers those hours will amount to price of new 3tb ssd.

Or just give up, go for weekend to burgerflippery place, flip some burgers and buy bigger ssd.

You can make script that mercilessly cleans the filth from your ssd, but then you may get weird crashes.

And try symbolic links in windows, force all that ■■■■ to be stored on single drive. Yes this should be not needed, but those clueless coders should think before they copy paste from stack overflow.