Researched quite a bit, but didn’t find any useful info. Here’s the problem:

Let’s say metallic Lift that travels up and Down. So the walls are reflective.
But because everything is static within lift- it makes sense to set static reflection probe (just as normal probe, that you set for static environment), but in this case dedicated to moving object.

So is there a way to do this?

(Normally it would be Reflection Map set just to this object (material). but Unreal Engine doesn’t have it)

You need to generate a cubemap by using a Scene Capture Cube actor and a Cube Render Target, turn that render target into a static texture, and then use that in your material. You’ll also need to use ReflectionVector for the UV’s of the cubemap.

Great. Thanks Jacky.
So that’s sounds like workaround for/instead Reflection map.
Will give a try.

Worked Like a charm. Just had to Darken diffuse to give it Metallic look.
Also exported rendered texture to add Blur and Contrast. But if it’s polished surface - the direct Rendered Texture input does the job.

Will leave this here if anybody else needs: 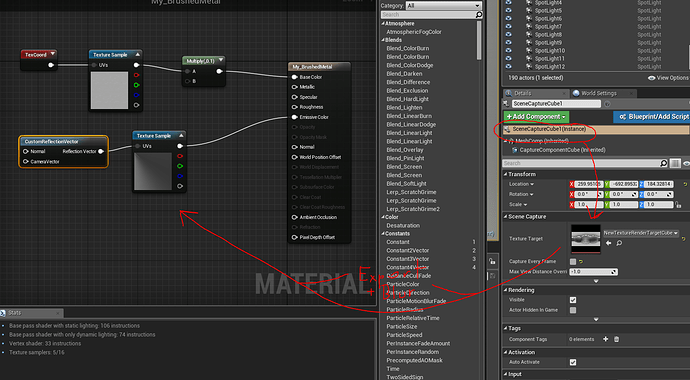