I have a problem not directly related with UE4, but, I think, related to the way 3D models are structured.
I have a project which should run over Oculus Rift and Oculus Go. The second one, as you know, is much less powerful than the first one, so I have to reduce something in order to have it running smoothly. The first thing, I try to reduce the number of triangles the device has to render, so I set a LOD 1 on each static mesh with a Percent Triangles, let’s say, of 20%.

The problem is that, among removed vertices, some of them is on the mesh’s edges. So when all meshes are reduced I see their edges not matching anymore.
e.g. I have a floor and a wall which match exactly. When I reduce the number of their triangles, I see a hole in the corner where the two meshes should match.

How can I reduce the number of vertices/triangles by preserving the ones along the edge of the mesh?

you could just make the LODs yourself in a modeling program. since its a floor it should be pretty easy to eliminate verts. programs like blender have tools for decreasing poly count, for example there is one where it combines faces depending on their angle to each other.

Yes I could, but I have to replace all the meshes in the project, or having two different maps. Instead it would be cleaner to have something such as two LODs on every meshes and force the LOD level depending on the specific device executing the project.

im not saying to have separate meshes im saying to make the lod yourself. there are a ton of tutorials out there that show how this is done. basically though you create several versions of your mesh yourself that represent the lod levels then when you import them you have your custom lod levels. it can be as simple as you like for example you could import your mesh then start dissolving edges by hand to create a lower poly model, or you could retopo if you wanted. just know your not replacing your meshes manually your only creating a custom lod where you have control of where the reduction in polys are. 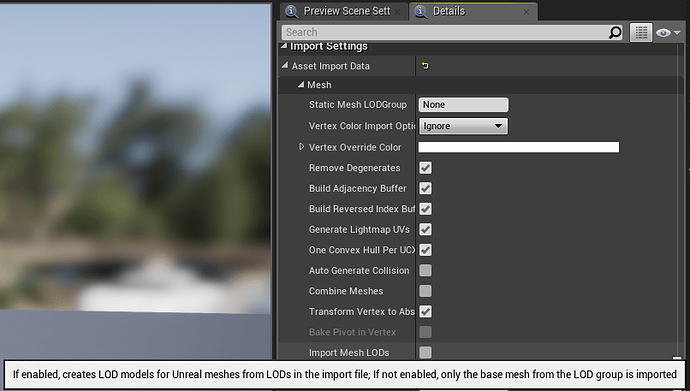