I am writing code on UE 4.12, which involves using a spline mesh component as a “wall” (manipulating its EndPosition), and making this wall interact with other actors on the scene. The game is oriented on mobile devices, and I am testing it on iOS (iPad Air 2 running iOS9).

Now, on PC and Mac, the splineMesh components that I create during runtime this way: 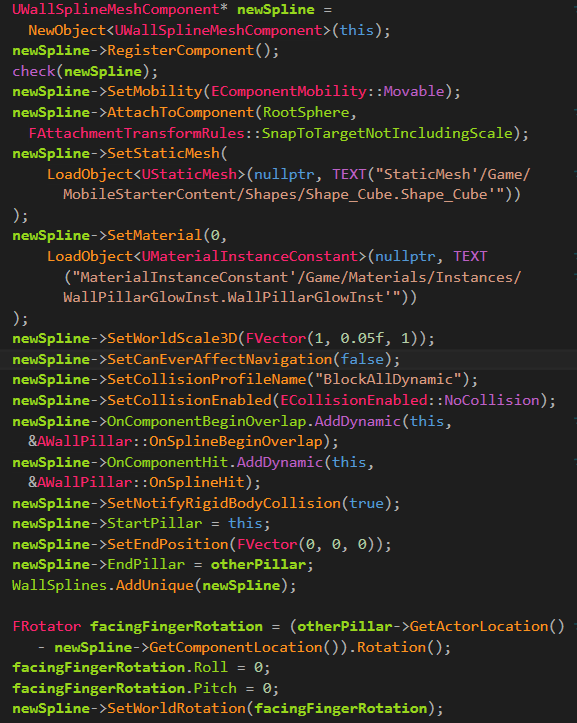 do indeed overlap or Hit (the code above is aimed at Hit events generation, but I also had a working version where splines would OverlapAllDynamic and generate overlap events no probs), invoking handlers you can see in the code.

Note: I am disabling collision during component creation, but enable it later in the runtime:

However, on iOS device (iPad), the spline meshes do not overlap or hit anything - my handlers do not fire up at any point on any type of objects on the scene overlapping the splines.

Is this a known bug?

P.S: During my previous experiments with spline meshes, I did let them affect the navigation, and both on computers and iOS devices spline meshes would create navigation obstacles in runtime just fine.

AFAIK spline meshes collision needs runtime physics cooking to work and by default the mobile builds of UE4 have it disabled (so only pre-generated collison data will work, runtime-generated collision data like spline meshes or procedural meshes won’t). It’s possible to enable it, but you’ll need to use the GitHub version and make a source code few changes, check this thread for details:

Hi all, I’m making an android/mobile game that relies heavily on procedural meshes using the ProceduralMeshComponent. The problem is that collision isn’t working for mobile. From what I can gather this is for performance reasons (or legal reasons...

Alright, that makes sense. Thank you.