As you can see in the following video, I was messing around in the Shooter Game with Splines. I copied one of the cars and added a spline component to it. However, unlike directed, the vehicle flew opposite of the path given. 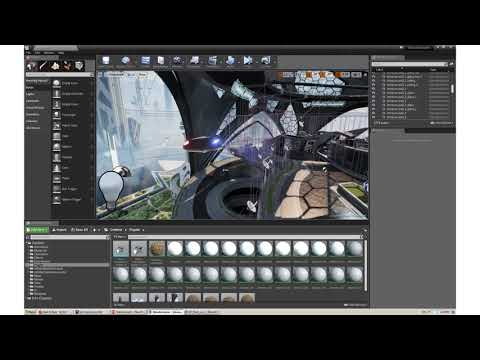 After I rotated my vehicle, the results were exactly the same. What did I do wrong? What other node should I use, instead of GetStaticMeshComponent?

The problem is that the spline is a child of the object that it’s moving.
You’d have to unparent the spline from the object first. You could use the “DetachfromComponent”, with world settings.

Also, you can’t multiply a time greater than 1 to the spline length. Well, you can but in your timeline over 10 seconds the value goes from 0 to 2, which means that half the time it won’t move. At 5 seconds, Timeline length * 1 = timeline length. Past that, it will just be sitting at the end of the spline.

Do you mean DetachfromComponent node in the Blueprint Editor? If so, how should I use it? Sorry, I am just getting started with Blueprints and all. It is just that I looked into that node and found it a little complicating.

Yes, Detach the spline component before the timeline begins playing with the DetachFromComponent Node. Set all the settings to world. That should be all there is to it.

Yes, Detach the spline component before the timeline begins playing with the DetachFromComponent Node. Set all the settings to world. That should be all there is to it.

Great! Thanks for your help.

Wait, would it work if I created a spline and then made the car its child? I mean, I tried, but for some reason, my spline would not prolong itself further than two path points.