Slow rendering with only a handful of objects

Very new to UE here (but not to rendering in general) and I’ve run into a problem where rendering is getting CPU bound in a really bad way. I would expect the engine to be more than capable of handling my scene with no issues, but I’m getting ~10 fps on a i7-7700K/1080ti/64GB RAM. I’m working on this project with someone else who has a less powerful computer which handles the scene fine, so I’m thinking there’s something wrong with my local configuration but I have no idea what.

Key point as well: this seems very obviously CPU bound. I’m seeing a CPU core maxed but the GPU is less than 10% utilised. The problem only appears when I’m rendering a ‘large’ number of objects, as if I turn the camera so that a smaller portion of the scene is rendered we go back up to 120 fps. As can be seen from the statistics page, I’ve got meshes with a pretty small polygon count and only 2000 ish of them, so I don’t think I should be running into problems with the tri count. However, looking at the number of DrawPrimitive calls, we’re up at 12,500 for only 2000 objects, with only a dozen unique meshes. Surely this is wrong? Wouldn’t indexed draws be used for this? This is my best hunch for what is causing the CPU bottlenecking, but I’m clutching at straws here. Any help/pointers appreciated. 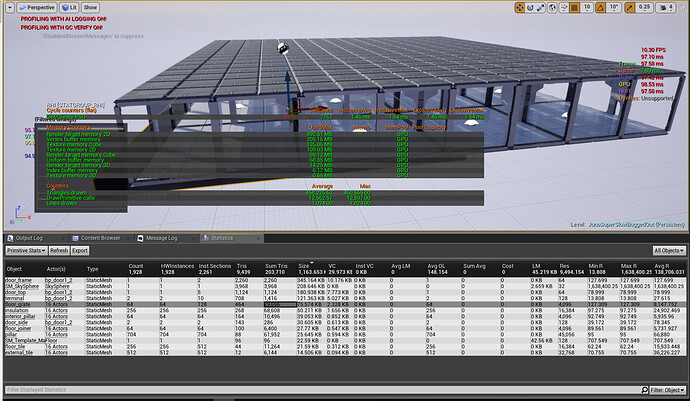 That is not a handful of objects, but an order of magnitude above of what you should be rendering. Reduce number of your objects.

You can’t be serious that this is too many objects. If I’m an order of magnitude out you’re saying that the engine is only capable of 200 ish meshes? There’s no way anyone would be able to produce a AAA product with that kind of budget

One order of magnitude less than 12560~(This is the number of objects you are submitting for rendering) would 1256, which would bring it to realistic range, so yeah pretty serious.
Your objects are rendered in multiple different passes and this stat is not wrong.

There are only ~120 actors comprised of 1928 meshes. Even so there are only 13 unique meshes. I would hardly call this a complex scene. Other engines can easily handle several thousand objects by using instanced calls properly, and I’ve seen UE handle more than this.

Again, this same scene has no issues on another computer, so saying that the scene complexity alone is the problem is clearly untrue.