The Sky Atmosphere component doesn’t map correctly to the right eye. In the left eye, the atmospherics are drawn over the geo correctly, particularly visible near the sun. But in the right-eye, it’s as though the scene has been rotated 70 degrees on the Z-axis, laying atmospherics over geometry to my right.

Also, the correct atmospherics appear constant, where as the incorrect ones in the right-eye seem to fade on and fade off as the invisible sun (if the sun was 70 degrees to the right) becomes centered in view.

Currently the only fix I can find is to set Aerial Perspective View Distance to 0. But this removes most of the atmospheric effects. 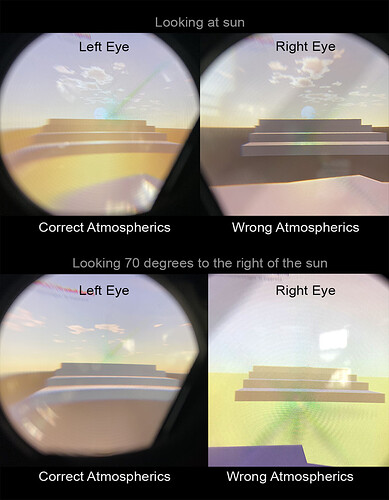 Any news on this ?

I just asked this in another group, will report back if I figure it out!