Sizable blueprint nodes (sequence, switch on and the like)

Imagine if you could grab the bottom of the switch and drag down, so that the whole blueprint node becomes taller. The lines would then become straight, at least somewhat, and it would be easier to follow and modify.
Same functionality for any blueprint that can have exec pins added such as the sequence node.

While not something extraordinary, it would be nice.
Maybe it would look something like this (not the greatest paint user) 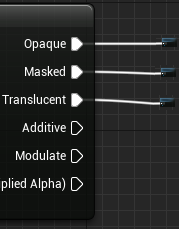 Basically so it would add extra padding and space to the first node so that it lines up better? You could make the node as tall or short as you want?

Yes, that’s the point I was trying to put forward - Well put. To be able to add space between the exec pins so that blueprint nodes can actually “fit in between them”.

So basically it is sizable node which should result in equal padding between pins… it is quite nice request actually.

Holy Cow of a Switch xD

For things like this I encapsulate the functionality into a single object with an interface. This way I have clean code without a switch statement.