Over the past couple weeks, we’ve just started learning the unreal engine for the first time. I’ve been prototyping some gameplay ideas, while our artist has been creating some models and animations. Up until this point, we’ve been working in our own individual projects, and now I’d like to take some of his assets and import them into my prototype game. So far, we’re having a heck of a time getting this to work smoothly without me having to manually reconnect a bunch of stuff for example in the material blueprints.

I’ve searched around and followed suggestions such as the ones in this post:

How to transfer assets between projects

I wanted to know how we can transfer assets between projects in rocket such as particle effects and blueprints.

So far, nothing has worked out. Even something as basic as a material isn’t coming over without having broken links to the textures it’s referencing: 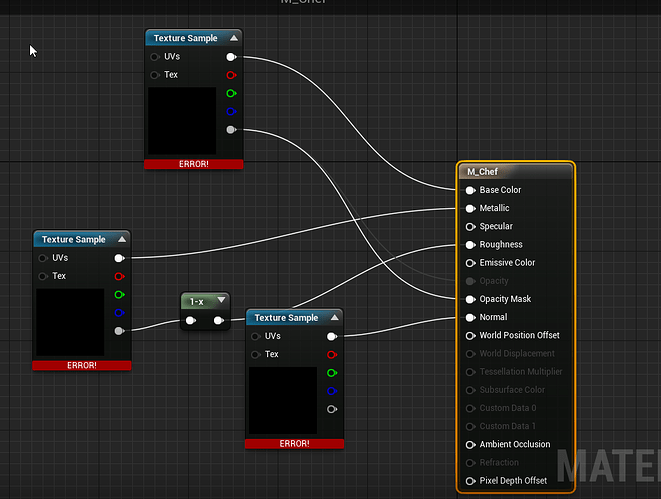 In the above example, we made sure all the textures the material is referencing are all in the same folder which is a simple subfolder of the “resources” folder. We’ve tried both a “migrate” to make sure all the dependencies were met, and just copying things directly using explorer, but can’t get the materials to come across. One caveat, I’m on UE 14.12 and he’s on 14.11, so we will try an engine upgrade, but besides that I’ve run out of ideas short of just working on the exact same project all the time.

Is there a surefire way to share assets across different projects that’s guaranteed to work? What steps might we have done incorrectly?

Our current workaround was to create a new empty project, and migrate the art assets over to the new project locally first, then share that entire project with me. I then migrated the assets from that project into my own, and everything seems to be working.

I haven’t confirmed this, but I have a suspicion that Redirectors might have been causing the issue:

Objects that are placed in packages to redirect references to moved assets to their current locations.

So in the future we could investigate running the FixupRedirects commandlet.