I have several skeletal meshes, all rigged to the same skeleton. I try to make a modular character with different clothing options.

This works except on one mesh (my trenchcoat) I get weird deformations if I set it up to follow the head master pose. If I do it the other way around (trenchcoat as main skeletal mesh and make the head follow) it works fine.

I also attached a photo of my construction script in the character BP.

Can someone please help me and tell me what I’m doing wrong? Or this is a bug? 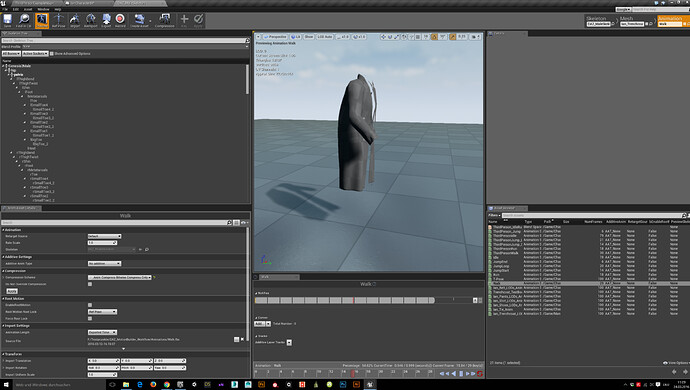 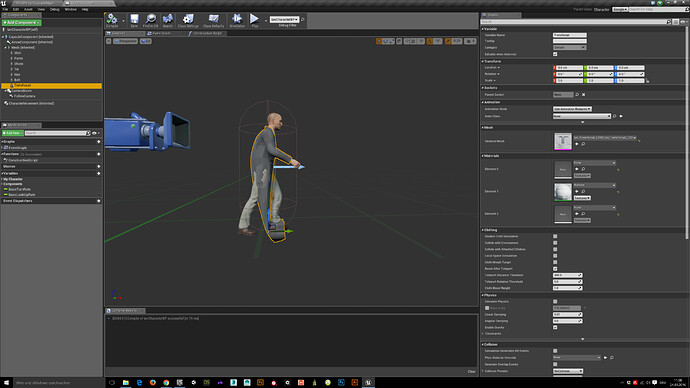 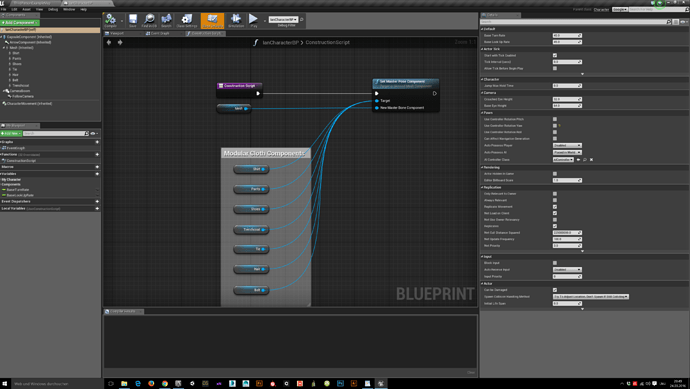 Does your trench coat mesh have additional bones by any chance?

I am having a similar problem in 4.10 and 4.11 preview. In my case, the slave component’s skeletal mesh has additional bones. The extra joints seem to translate to a location near the root bone when in play or in simulation in editor - with or without an animation applied to the character BP. The result is the slave component’s mesh stretching towards the floor like in your picture.

The skeletal mesh for the slave component was FBX imported to share the master component’s skeleton without any error. When looking at the individual meshes in the Persona editor, applying an animation to the skeleton and switching between the master and slave meshes for preview, I don’t see any apparent problem there.

I haven’t encountered this problem when using meshes without additional bones for the slave component.

Man, you’re a lifesaver…you were right, there were two additional bones I did not see at first. That did the trick. Do you have Paypal so I can get you a virtual coffee? I would mark your comment as the answer but apparently that doesn’t work for comments (?). Many thanks!!

Glad you found a solution. I found this other post with an explanation from the staff, so that’s probably the answer: weird-set-master-pose-behaviour

Hey so I’m having the same problem. My issue is that I want to be able to mix/match different clothing options, add as many as I want in the future, etc.

I get that this is happening because the slave has extra bones. But there doesn’t seem to be a “solution” in this thread so I’m wondering, am I missing something?

I can’t put the extra bones in the original skeleton because a) that would make me puke and b) I would have to do that every time I add a new piece of clothing with “ponytail” bones. I also tried having the character mesh be the slave to the clothing piece, but that wouldn’t work either because as soon as I have more than 1 piece of clothing that simulates physics I wouldn’t be able to pick one as the master without messing up the other.

Just to be clear, the clothing that I’m attempting this with (a loincloth with a physics-simulating flap in the front) has the same skeleton as the character, but 4 extra bones that branch off at the “pelvis” bone. So I’m not really “interrupting” the hierarchy there I’m just adding onto it.

Do you know of a way to get around this issue or solve it in a way that will be modular for the potential addition of more physics-based clothing in the future?

Well, for me the solution was to delete the extra bones since they were not needed in my case. Also the extra bones were greyed out since there was no skin weight painted on them (not sure but I think this in part was responsible for “set master pose” to go crazy).

So I would suggest to have the extra bones that you need at the end of the hierarchy since the problem might be related to the bone order and to make sure you have skinned these bones.

If this does not help I would guess the only way would be to have these extra bones on your original skeleton as well.

Yeah I need the extra bones because I’m trying to have a physics flap that hangs off of this piece of clothing. I could be doing it in 2 pieces, but that would disrupt the art pipeline quite a bit so I would like to avoid that as much as possible.

So I can’t get rid of the bones at the end of the hierarchy. It looks like this:

So I could see that there is definitely a gap starting at spine_01 and ending at the anchor…so I tried to assign very small vert influences to those bones in order to un-grey them out…and it worked. Those bones were no longer grey. But it didn’t fix the set master pose FREAKISHNESS.

The only other thing that I think might work is if I go into each and every bone in the hierarchy and add the smallest possible influence (I don’t want the clothing mesh to deform in incorrect ways obviously) in order to un-grey the entire part of the hierarchy that falls between the “unused” bones and the extra bones. I’ll give that a shot and see if it works…

If anybody else has a better/more graceful solution to this that would be super helpful.