SceneTexture: Opacity is broken in 4.8

I probably could now use SubsurfaceColor and Mulitply that up to get it as a mask. Still any SceneTexture not working limits me even more, on that note I made a thread here concerning masks: Masks - Feedback for Unreal Engine team - Unreal Engine Forums

I am investigating some odd behavior with that particular Buffer Node, but it should not be rendering completely white. I am currently investigating why the node is returning a value of 1 on all opaque Materials and not just the materials which have an opacity shader model (Sub-surface).

For clarity as well, The SceneTexture:Opacity node accesses the Opacity Buffer Visualization which is defined in our documentation as, “The Opacity viewmode [Buffer Visualization] only shows opaque materials with Opacity being used, which is important in the case of subsurface scattering materials, as the Opacity controls how far light can penetrate.” Here is the Full Documentation link which goes through what each Buffer should yield, with some exceptions namely the PostProcessing0…N, these Buffers are identical to the SceneTexture node:

As soon as I know more I will post back. Thank You for your report -

Okay, so I had a conversation with one of our Senior Graphics Architects to make sure I understand exact what the Opacity Node is supposed to yield. While we can argue that the naming of Opacity is misleading, it actually refers to the opacity needed to help render subsurface opaque materials and this is the main reason that this buffer exists. So in terms of a 0…1 range, an Opaque material that has No Opacity would render as a 1 and with full opacity would be a 0 which is the behavior that I am seeing in 4.8.1. 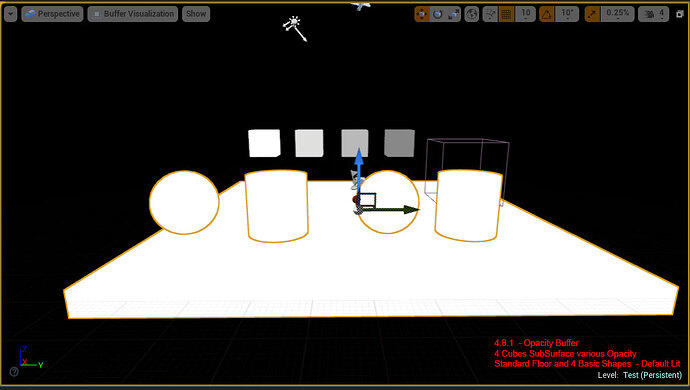