I’m really happy to announce that my blueprint has been approved by the Epic Team and it’s now available on the Marketplace!
https://www.unrealengine.com/marketp…ttings-tweaker

It’s a blueprint, specifically an Editor Widget, so it’s a confortable panel of settings which can be placed where you want, with a lot of buttons and options to configure all Ray Tracing settings of Unreal Engine from only one-unique place. By using it, you can tweak all RT settings in a second without needing to place any PostProcess Volume and modify it’s parameters, clicking on every light on the scene and tweaking their Samples per Pixel, Mobility or Source Radius one by one, the same with every light component inside blueprints, etc.

I have published too a free compiled demo project (https://marvizer.itch.io/blueprint-e…acing-settings), with a classical UI Widget instead, to play and tweak the options, parameters and buttons, so you can have a very close idea about how the final product with the Editor Widget works, as they are almost the same (The UI Widget is executed in run-time, placed on a fixed position, and the Editor Widget, instead, runs on Editor mode and can be placed where you want).

Ray Tracing Unreal Engine 4 tutorial setup + one-clic blueprint - YouTube(You can jump to 0:38 to see it in action, or to 8:43 to get a deeper demonstration of the Blueprint)* 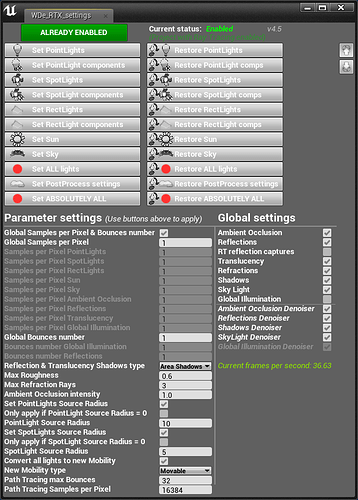 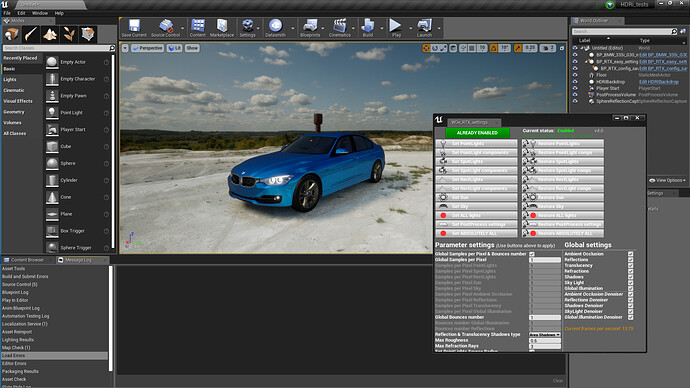 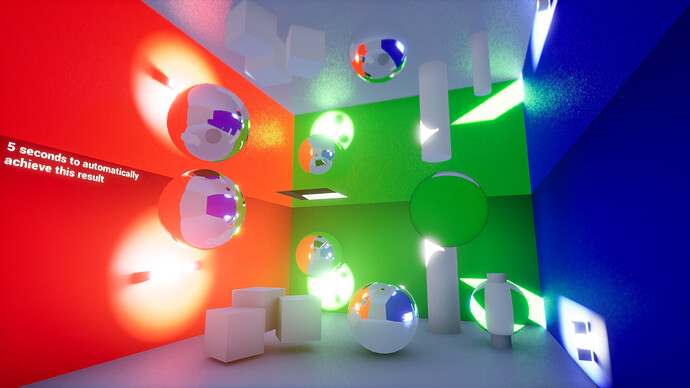 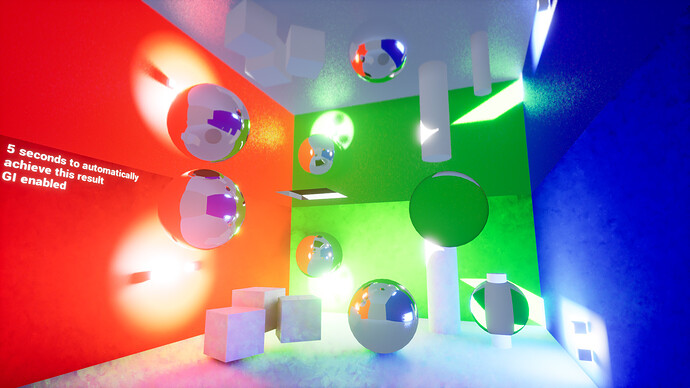 I hope you like it. C&C are always welcome!

Updated, some days ago, to version v3.0. Fixed a little issue and added a button to simplify the use of the Editor Widget.

Working also on version 4.0, adding options to enable/disable RT reflections, refractions, global illumination, ambient occlusion, every kind of denoiser… Expected to be released during next week.

New version 4.0 released! As an user suggested, I have added check boxes to enable and disable some global ray tracing options like ambient occlusion, reflections, global illumination, every kind of denoiser… And I think it’s a good moment to end the launch promotional sale of 50% off.

You can watch this new video with those new added options (at 2:24): 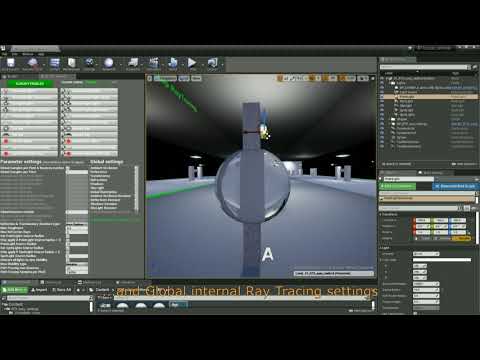 The free downloadable project has been updated to the same version too, so you can try and tweak all the settings and see their results for free and by yourself: https://marvizer.itch.io/blueprint-e…acing-settings

Working on version 5.0, with internal code and behaviour optimizations and with some more options, to make it even more powerful! Planned to be released in 1-2 weeks.

Updated to version v4.1, before the arrive of the v5.0, to fix a little error that could affect only a few users in an exceptional case, due to an internal Unreal Engine’s bug, which I’m going to report:

An user has reported me that he had an error inside the WDe_RTX_settings: his engine was not recognizing the new node Spawn Actor from Class added since UE 4.22.2 for Editor Widgets. For an unknown reason, some projects can result corrupted and they will stop using/showing/recognizing that node, as it also happent to me time ago… As you can see, a healthy project should show these two Spawn Actor from Class nodes (the usual one, and the Editor Widget one) when calling them from the Event Graph of an Editor Widget: 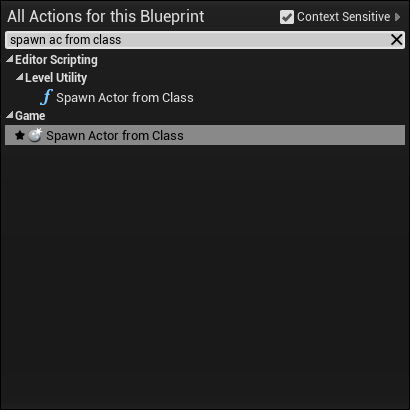 But his project wasn’t able to use that node anymore. To fix it, we will use the classical Spawn Actor node inside Game category instead, so it has been already updated and fixed in the Marketplace to use it from now, and it’s perfectly working for all users now.

Now available on the marketplace’s Flash Sale with a 30% off!

And thank you, current customers, for considering my tool useful. It’s a really pleasure to see that it can help you on your workflows

I really like the asset and I use it. If for the next version you can add a scroll to the UI as it doesn’t fit entirely on every screen. Also it would be very useful if there is a global disable/enable raytracing checkbox or button. That way I can turn on RT change the settings and then while working have it off until I need to preview/see final image if I have my samples up very high.

I really like the asset and I use it. If for the next version you can add a scroll to the UI as it doesn’t fit entirely on every screen. Also it would be very useful if there is a global disable/enable raytracing checkbox or button. That way I can turn on RT change the settings and then while working have it off until I need to preview/see final image if I have my samples up very high.

Thank you for your feedback!

Yeah, it would be really great to be able to add a scroll to the panel, but I am not sure if Unreal allows to add it on Editor Widgets. Anyway, I will look of it!

About enabling or disabling RayTracing in a project, it’s not possible to be done right now even from a command line, as it’s an internal Unreal’s behaviour and a project must have it enabled or disabled from “the beginning”. As far as I know, it’s not possible to do it in real time, until Epic add that functionality to their engine. When they do it, I will add that option, for sure!

Thanks again and best regards 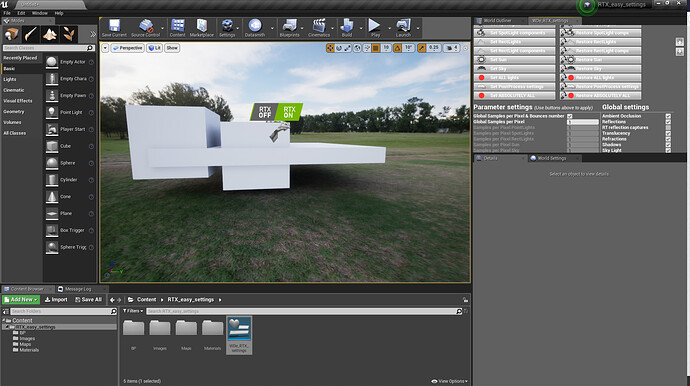 forum1.jpg1928×1080 356 KB
Fast example with no lights using a Backdrop, testing internal Backdrop “sky-HDRi light” and ambient occlusion. Deleted the sun and the SphereReflection Capture. Only made one clic on my Editor Widget, on “Set absolutely all” button.

Advice: As Ray Tracing is a heavy task for weak PCs, remember that to get more FPS while working, as Unreal Engine 4 doesn’t allow us to completely disable Ray Tracing, you can disable, instead, a lot of Global Settings with a very few clics from my Editor Widget panel, so you can work fluently, and reactivate them when you want to see the final, heavy, ray-traced result of your image.

NOTE: Please, keep in mind that in UE v4.23 exists another new bug too that didn’t exist in UE v4.22: if you Run an Editor Widget and close it, and try to open another map (or sometimes simply save the current map), UE will crash. This means that my tool will make the same, as it’s an Editor Widget too. You can prevent this crash keeping the Editor Widget window opened, without closing it manually, until Epic Games fix that bug, os use UE v4.22. For more details, I have opened this thread:
https://forums.unrealengine.com/unre…idget-crashing and already reported to Epic as a bug. Solved on UE 4.23.1

PS: new update must be manually approved by Epic team, so it usually take some minutes or hours to be updated in the Marketplace, but it could take up to a couple of days.

On UE 4.23.1 the Editor Widget crash bug has been fixed! and the problem existing with reflection captures, avoiding to have the ray traced bounces we wanted, have been solved too!

PS: Still waiting Epic for updating my tool on the marketplace with my last addons. They must be a little busy making great changes like the ones mentioned.

I just bought this to use but I cant seem to be able to turn off or on any of the global settings? Any clues why…thx

I added a ppv first before initializing the widget and it worked - nor sure if it helped but I will replay my steps and see where the issue came from before…I think its a great tool!

One new issue and a question:

I cant seem to make any reflective bounce work so my reflections using the hdri backdrop remain black…and I noticed I’m on V4. but I see you have 4.5 out but this is what I downloaded?

It should work even without having a post process volume in the scene, as my tool already includes an internal PPV. In fact, if you put a PPV in your scene, my tool will replace it’s Ray Tracing settings with the ones included in my tool’s post process volume. Maybe you didn’t activate the tool pressing the red Enable button?

Please, if you can, could you post a screenshoot or even an example project? (If you want, simply including one map and some basic objects, lights and reflexive materials to be able to notice the evidences).

One new issue and a question:

I cant seem to make any reflective bounce work so my reflections using the hdri backdrop remain black…and I noticed I’m on V4. but I see you have 4.5 out but this is what I downloaded?

And yes, my tool v4.5 is already released but this time Epic is taking more than normal to approve it and update the product on the marketplace, but have been already sent to them days ago, so it should be updated very very soon (they usually took 1 or 2 days, maximum, to approve past updates).

Thi is what happening…any changes I make I loose focus according to the output log?!

I cant seem to see the hotfix in the Installer how can I upgrade to 4.23.1? thx

Thi is what happening…any changes I make I loose focus according to the output log?!

Too small to read it! hehe.

Have you tried enabling and disabling the Denoisers? It’s usually the most percetible setting by the eye, when enabled and disabled.

And please, what do you mean about loosing focus?

I cant seem to see the hotfix in the Installer how can I upgrade to 4.23.1? thx

You should be able to see it on the Epic Launcher, it isn’t?:

Any changes I do in the parameters setting I get this…is this normal?

Also if I can suggest something: there is a cmd line that enables the reflections to fall back to the reflection probes after the bounces have been exhausted very useful for optimzation. r.raytracing,reflection.reflectioncaptures 1…would be nice to include it…