Hello to Everyone… ( ask you sorry for my english in advance )
my problem could be simple for you ( and i hope be )
I use a first person camera… and when i pick up an object it will appear in front on camera to be examined.

NOW…
i use MOUSE_X axis ( from axis mapping - Input ) to controll the “YAW” and MOUSE_Y axis to controll the “PITCH”.
everything works great but…i want my object could turn ( pitch ) always in the direction of camera.

maybe the pics can help…

thank you to everyone in advance

That would be toggling between local or global transforming.

i tried in both ways… same problem

Can you show us a screenshot of your BP setup?

You need to define your own axis as the cross product between the camera vector and world up (0,0,1). Then you need to instead perform a rotation on your axes as vectors around the newly defined axis. You will not be able to do what you want by using a rotator since by definition you are restricted to the 3 main axes of rotation.

Thank you Ryan, may i ask you if and where can i find some tutorial or forum about " create this vector axis "
i already can create a foward vector from camera…but i can’t create one vector crossing my camera vector

Get cross product between the camera vector and world up (0,0,1). cameravector is campos-objectpos normalized.

There is a node called “Rotate Vector Around Axis”.

i can’t do what Ryan Answered to me

I’m a beginner… with programming.
Can some one let me see how to do? maybe a blue print screenshot

Thank you so much in advance and sorry again

I had a quick go based on RyanB’s answer.
Swapped out RotateAroundAxis with the RotatorFromAxisAndAngle node. Seemed to work ok for me at least.

The blueprint is the PLAYER blueprint and the object i take in front of the camera is an EXTERNAL ACTOR…
i created a variable ( actor ) and i set the actor in accordance with what object I interact.
so… instead of GET WORLD LOCATION i have “GET ACTOR LOCATION”

The math you have going into your rotator is part of what you need for an axis. You also need to do cross product with (0,0,1) to create an axis that is perpendicular. Then you need to use that as the axis to rotate all 3 vectors and then make rotation from the vector axes.

Hi RyanB,
may i ask you an example of blueprint screenshot of all operation?
I’m stuck from more than 1 month in this problem

dont forget to read the node comments they explain the rest

Hello Ryan and hello to all …
I was really hoping to be able to write that everything was solved … but I can not.
I’ll show you what happen to me…

all work good but turn in a wrong axis.

you can see in this pic 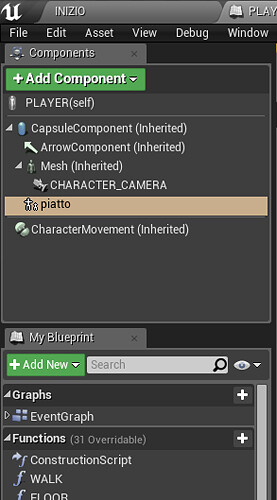 PIATTO is the actor i tested for the Ryan’s Solution

but with ACTOR variable i can’t use " getworld…POSITION or ROTATION " i can use only " getactor…POSITION or RELATIVEPOSITION "
what can i use of those?

thank you so much… and sorry for bother you again

I don’t want GIVE UP…

i add also my blueprint pic…

Wow I did not know about that draw debug coordinate system node. I have been manually drawing all 3 lines every time I do this kind of thing.

The selected actor is the BP that does the rotation stuff. The colorchart mesh is just a regular mesh in the world with no BP script:

Colorchart mesh is referenced by the other BP as actor reference:

Changing angle causes mesh reference to rotate around an axis perpendicular to the vector between the actors:

My script looks the same as yours:

i wrote this script inside my PLAYER_BLUEPRINT
is it correct?
and my “dish” mesh is inside a blueprint actor.

You need to debug to see what is going wrong at this point. Your math looks the same so something about your vectors or actor locations is not working as expeted. Do draw debug sphere on all your locations to make sure they are right.

Now work perfectly … i’ll check better for be sure.
So Ryan…what can i say… thank you so much for your help and time spent. You are so helpful.
Thank you.

oh man I feel your pain… those nodes are way too similar looking. I remember complaining about that a while but but not sure what happened to that bug report… Glad it is working now!